My article in interaksyon.com, Poverty, Planning and Populism has attracted the attention of some lovers of central planning and more government. Below are our exchanges, dated October 28 to 30, 2012:
---------

Carlo Lacanilao What this article failed to mention is that this is the very economic framework that sets the objective structural barriers to achieving prosperity; and - while, shifting the blame on the poor - forgets that poverty in itself shapes, conditions, and constrains, individual freedom and responsibility.

Nonoy Oplas ·  More on "shifting the blame, and credit, on the individual", rich and poor alike, not just the poor.

Lean Porquia ·  Time and again, economists failed to see that the Philippines does not have material conditions to become industrialized. Look at the policies implemented and how they affect millions of poor Filipinos (contractual status, export-labor policy, value added tax, two-tier wage system, privatization of social services). The stubbornness of the current system is the biased favor for the entrenched wealthy elite rather than protect the interest of the majority poor people. The key in resolving the problem, turn it upside down.

Nonoy Oplas · It is often easy to blame all other external factors and excuse the individual for his accountability to himself, his family and community. And precisely why central planning in labor, trade, other policies do not jibe with encouraging more entrepreneurship and individual creativeness.

Lean Porquia ·  Individual accountability is actually enshrined in collective and centralized planning. Has every individual performing for the economy. The thing with your point that it does not jibe with encouraging entrepreneurship is actually persistent in the current status quo. Bakit po ba, well protected and small and micro entrepreneurs with the kind of policies implemented right now? It's very ironic that your idea is very much conservative to the point that even European countries are turning against trade liberalization and is gearing for protectionism. The only countries who survived the recent crisis are those with solid centralized economic planning. Please consider that.

Nonoy Oplas ·  Yes, much of Europe is protectionist, there is free trade only among EU member countries. Protectionism or central planning in international trade, restricts or kills individual freedom. Imagine a situation where there is a national or Filipino cell phone manufacturer and the PH government will restrict importation of iPhone, Samsung, HTC, other foreign brands. It will be a very lousy situaton. We are lucky that such type of protectionism is non-existent in our economy.

Carlo Lacanilao Nonoy Oplas: Granted that that there has to be accountability attributed to individuals but, we know for a fact that, it is collective action that changes society (history) - not individuals. So we go back again to the economic providing hindrances to the achievement of individual creativeness by restricting the spread of mass development and by doing so reserves the fullest of development gains to the benefit of the very few.

"Protectionism or central planning in international trade, restricts or kills individual freedom" <- It's a flimsy assumption that a planned economy will be inefficient considering how meticulous major corporations are when it comes to their own business plans. Planning is not an an end in itself but a means to determine what is essential. The freedom - that word again - to determine by social need rather than the bottom line. To produce more hospitals or more rice or more corn rather than cellphones. Under Hayekian economic libertarianism this is left to those whose drive and interest is solely motivated primarily by profit.

Nonoy Oplas · Where there is more central planning, there are more problems than solutions. Look at healthcare: there are hundreds of govt hospitals (under DOH, UP PGH, AFP hosp., provincial hospitals, city govt hospitals), there are tens of thousands of govt. rural health centers, there is government health insurance monopoly (PhilHealth), thousands of DOH-sponsored Botika ng Barangay, there is drug price control policy, there are free medicines for the poor, etc., and yet health problems are never ending.

Compare that in the food sector: there is not a single government restaurant or carinderia, no government supermarket or grocery store, and yet people are eating. The big difference? There are rigidities under central planning while there is flexibility under free market. Someone eating a P20 spaghetti in a carinderia does not feel that he will die or will get food poisoning compared to someone eating a P200 or P500 pasta in a fine resto.

Carlo Lacanilao It is not the number of hospitals that's causing this problem. It is how these hospitals are managed based on the budget being given compared to other spending (military, debt-servicing, and other palliative programs). Cuba with its economic embargo has a very low if not the lowest child-mortality rate. Let's look at Sweden where, although private healthcare exists, is still mainly funded by the government: "life expectancy at 79/83 for men/women; 5% are aged 80 and above compared to EU member states; maternal mortality at 6 out of 1,000 babies and fewer than 1 out of 100,000 die in birth."

I don't even understand your pasta economics. What is certain is that there are fewer and fewer individuals who can afford that 20-peso spaghetti in a carinderia - preferring the 7 to 10 peso chicken or beef noodles - how much more the 200-500 peso kind. If you think that won't add to the health problem, then who are we kidding?

Nonoy Oplas ·  Sweden, UK, Germany, US, France, etc., they hold on economically despite heavy public debt and expensive welfarism mainly because of their adherence to the rule of law. In countries where rule of law implementation is weak and where rule of men rather dominates -- like the PH and many other poor countries -- having more and big government often leads to more wastes and corruption. That is how the free market fills the gap of large scale government failure.

Maintaining peace and order, protecting private properties, is mainly a government and police function. But in PH, the ones who guard our schools and universities, malls and shops, airports and seaports, villages and condos, hospitals and banks, are ALL private security agencies. Without this market-supplied security scheme, the country could be more underdeveloped as criminality and robbery will be rampant.

Carlo Lacanilao You have taken the discussion from central planning to health and then to food and now to peace and order "supplied by private security agencies" but there seems to be no satisfactory answer as to why central planning per se has no place in economic governance except in saying there are conditions for such and such country that don't exist in this country, therefore central planning is...

Systemic economic issues will not be resolved by more of the same policies which engendered the problems in the first place but by recognizing that such a system no longer works. It will require more than market reforms to correct this.

Also, the main argument remains: it is the current economic policies (neoliberalism) that has riddled the world not just in the grip of one crisis after another under the illusion that markets correct themselves (failing to underscore that the correction in itself is planned and was made possible due to the heavy bailout from govt); it is this economic libertarianism that has perpetuated poverty at the mercy of multinational corporations and investment bankers. Truly, in this state of things, they are the ones who are most free.

Lean Porquia · Nonoy Oplas centralized economic planning does not equal to restriction. that's the failure of your argument.

Nonoy Oplas · @Carlo, have to cite cases where central planning fails and where free market succeeds. To add more examples and cases: No government shirts and clothing corporations, no govt shoes and sandals corporations, no central planning how many running shoes, basketball shoes, golf shoes, cycling shoes, at what designs, and yet the market provides. Those who over produce at little demand lose money, those who produce at high demand make lots of money. Corporate expansion and bankruptcy are 100 percent part of business risks and market competition. Capitalism without failure is like religion without sin, that is why any form of government bail out to failing corporations is wrong, more statism than free market.

@Lean, central planning also means the government will confiscate certain percentage of our income and savings -- prevents us from spending more of our own money where we really need them -- and govt will give such money to cronies or wasteful govt corporations which tend to lose more than they earn.
-------- 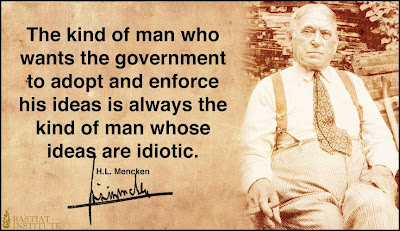 Meanwhile, I posted this poster in my facebook wall with this note, "Right. A bright idea does not need coercion to get implemented. An idiotic or moronic idea does."

That is why central planners love coercion and government enforcement. Whether people like their idea or not, they have to obey that idea, they have to finance that idea, even if it is an idiotic one.

A friend, Carlos Tapang, commented on it:
Take, for example, Obama's idea to produce an electric car. GM took the challenge only because they are (were?) partly owned by government. The Volt came into being at much fanfare. Last time I heard, it's still not selling. If it were really a good idea, it would not have required government incentives or prodding.

i'm sure you know that, but its weird that you are denying it.