Party List 5: Why it is Wrong in Theory and Practice

The party list (PL) system in both theory and practice is wrong. In theory, it is supposed to be a proportional representation system where smaller political parties are given chance via mandatory percentage share in the total seats in the parliament or Congress.

In the Philippines, that theory has been revised to represent the so-called "marginalized sectors" of society. And in practice in the country, almost all groups of opportunists mix up with well-meaning individuals to help centrally plan and change the country, towards their own world view of forced collectivism. Thus, we have a son of the former President representing the party of security guards, a former Cabinet Secretary (DND, DENR, DOE) who wanted to represent the party of bus drivers (he committed suicide a few years ago), of rich people representing parties of rice farmers, and so on. 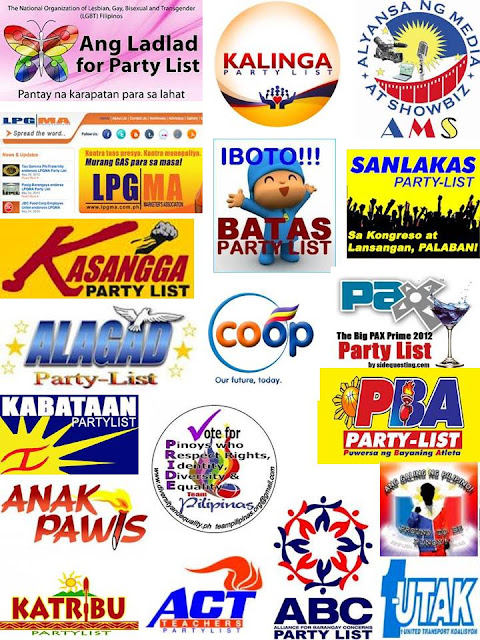 A friend, election lawyer and legal NGO leader Luie Guia posted a news article in his facebook status and he commented,


The Party List system is definitely NOT a joke if it is designed as it should be designed. Membership in the legislature under a true PL system is proportional to the votes obtained by parties contesting the seats. It's more "representative" than the single member district system that we are used to. Unfortunately, the design of the PL system we now have here in the Philippines is utterly flawed. 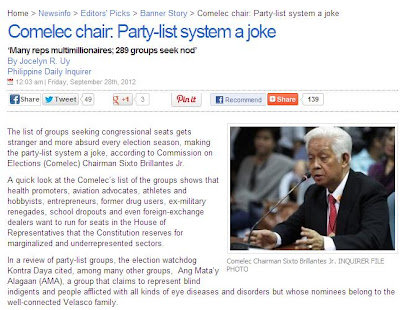 I like the term used by Comelec Chairman Sixto Brillantes, a "joke". I told Luie that like him, I somehow disagree with the term "joke" because it is worse than a joke. The PL system is a s sham, a scam, and even a tool for more public robbery.


Luie added that the Philippine version of PL has given PL a bad name at least to Filipinos. A true PL, where voters get to vote for parties and thus their ideologies rather than individuals, has been the system chosen by many emerging democracies as it allows even those in the fringes to be represented if they get enough votes. Regional and even ethnic tensions tend to be mitigated because more sectors of society are accommodated in the formal structure of government. I don't favor abolition of PL. I wish it to be re crafted and redesigned to make it work as it really should.

Below is a list of political parties in the Philippines:

Those that lost, about 100+ other party lists.
See a longer list of political parties in the Philippines and the name of their leaders in Wiki here.

There are too many political parties in the country already, both at the national and local levels. Adding the PL system makes it a dizzying situation. So with the free for all nature of PL opportunism, and these PLs are arranged alphabetically in the ballot box and voters can choose only one out of 100 plus PLs, most groups start the name of their party with 1 or A. There could be up to 400+ groups that want accreditation and participation in the PL system but the Comelec conducts preliminary hearing and remove many of them.

There are no marginalized sectors, only marginalized individuals. There are rich and poor individuals in each of those sectors -- farmers, fisherfolks, workers, women, youth, senior citizens, indivigenous people, security agencies,  teachers, and so on.

Thus, having too many political parties, PL or otherwise, often contribute to political miseducation and opportunism. It corrupts further the minds of the people, that they too can centrally plan the country and the world and it is relatively easy to do that via backdoor entrance like the PL system.
---------