One indicator of the presence of a bureaucracy is long lines of people. People cannot move or they cannot proceed to where they want to go, unless they get a permit first from a certain bureaucracy.

The immigration bureaucracy at Philippine international airports, especially at the NAIA Terminal 1, has this characteristic. Photo below, I took last September 27, 2010. I think I waited in that line for about 45 minutes before passing through the immigration exit procedure. Then go to second round of airport X-ray security. Photo below that I got from Philippine Star, I don't remember what month this year. That is for the arriving passengers from abroad. 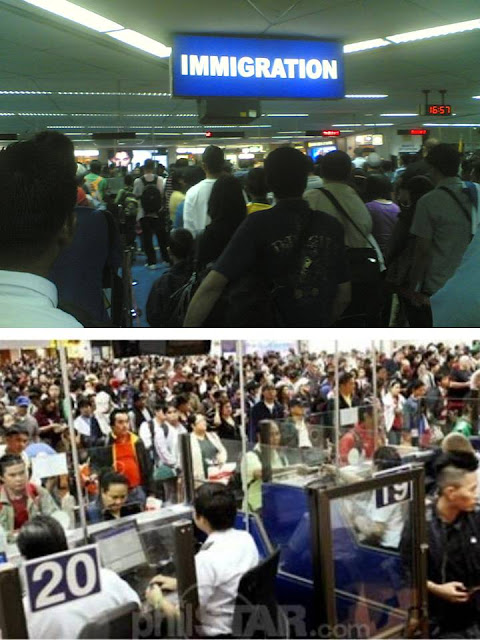 Photos below I took yesterday morning. Upper left is at Terminal 1 main lobby, passengers lining up checking in their respective airlines. Upper right is for the payment of travel tax, P1,620 ($38.6 (at P42/US $). See my earlier discussion, Migration and Freedom 13: Travel Tax Robbery, December 06, 2011/

Lower photos, at the immigration again. I spent about 45 minutes queuing here. Until about three or four years ago, one would queue for about 45 to 60 minutes here on average. It is now 2012 and the long lines have not been solved yet. 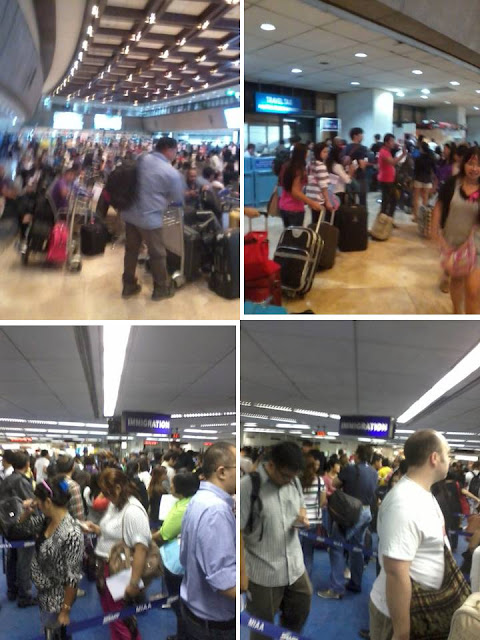 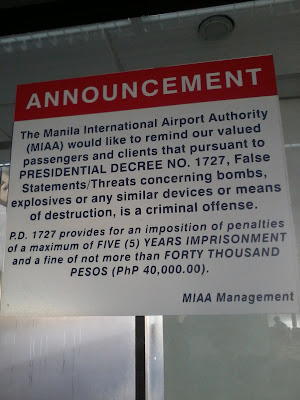 This is posted at the departure lounge and other parts of the airport. Just a joke about bombs at the airport can send one to  jail for five years plus a fine of up to P40,000.  Woe unto innocent jokers who made such
remarks before reading that note or announcement.

On another note, when I landed at Kuala Lumpur International Airport (KLIA) yesterday, I was surprised that passengers were not required to submit an immigration arrival card, wow! No need to fill up those immigration cards of where you will stay in Malaysia, what is your purpose, which foreign airport did you come from, etc.

You just show your passport and return ticket, the young immigration staff simply asked verbally what's the purpose of coming in, I said to attend a seminar, and that's it. He stamped an entry in my passport, and I was done in one minute. I would assume that no departure card will also be required for exiting foreigners.

In the US, you just submit your departure card to the airline when you board your plane, no need to pass through the immigration. Going through the US immigration is only upon arrival where they check if you have a valid US visa or not, you submit an arrival card, and go through electronic fingerprinting and photo.

I wish that the Philippine's Bureau of Immigration (BI) will become more efficient in processing exiting and arriving passengers, Filipinos and foreigners alike, and reduce the queuing time. High PH government officials like legislators are spared of this problem because they have a special and fast lane, the Diplomats' lane, and so they may not demand quick reforms at the BI to improve their system.