The Medicines Transparency Alliance (MeTA) Philippines and its multi-stakeholder process and dialogues, along with the DOH Advisory Council on Healthcare (ACH), are the best venues that allowed me to get involved in many policy discussions and even debates on various health issues with various players and stakeholders in this country.

I began writing on health topics in late 2007 after the Symposium on Intellectual Property, Innovations and Health in early September 2007 at Manila Hotel, jointly sponsored by the International Policy Network (IPN) and Minimal Government. I produced lots of blog posts and oped articles in various newspapers, here and other papers in Asia, thanks to IPN media network, on health, especially on intellectual property rights (IPR), drug patents and compulsory licensing, in 2008.

In January 2009, I was invited by the DOH to a first meeting by the Advisory Council. I also invited by Ms. Klara Tisocki, previously with the EU and now with WHO, WPRO, to participate in the MeTA Civil Society Organizations (CSO) mapping two-days workshop. I missed the DOH Advisory Council meeting and the first day of the CSO mapping because I was in Singapore then, in a meeting with fellow free market leaders in Asia.

I was able to attend the 2nd day of the CSO mapping, I was glad to meet the various NGO leaders who were often in the news then because of their involvement in the discussions of the Cheaper Medicines Law or RA 9502, that was enacted in June 2008. I was in the US for the Atlas Liberty Forum when the law was signed that day.

Anyway, I was able to attend the 2nd MeTA National Forum, a 3-days event after the 2-days CSO mapping. I was amazed at the big audience and the wide range of topics that covered not only medicines policy but also other health issues. The officers of MeTA Philippines at that time were former DOH Secretary Alberto "Quasi" Romualdez as Chairman, former Bulacan Governor and former PITC President Roberto "Obet" Pagdangan as Chairman, and Dr. Kenneth Hartigan-Go as Secretary General.

Since then, I got involved in the formation of the Coalition for Health Advocacy and Transparency (CHAT), the civil society partner of MeTA Philippines, as well as other MeTA fora and discussions.

Below, during the MeTA National Forum in January 2010. This is the press conference made while there were on-going panel discussions. Second photo, from left: Nancy Tacandong, acting FDA Director at that time; Gov. Obet, Doc Quasi, Wilbert Bannenberg, the Technical Consultant of MeTA in London, and Reiner Gloor of PHAP. 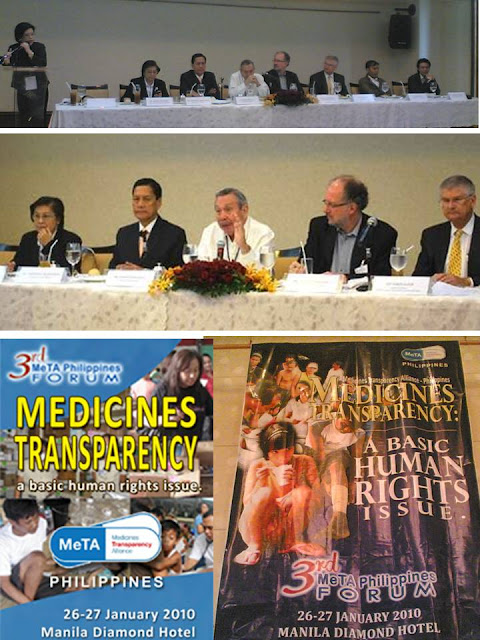 Group photo also during the 3rd MeTA National Forum. It was a 2-days forum, also held at Diamond Hotel. I attended this forum but I don't think I joined that group photo. I got this from the MeTA website, http://metaphilippines.org.ph/.

Lower photo is another two-days MeTA forum on universal health care (UHC). I was able to attend this too, held at the Ramon Magsaysay Center. 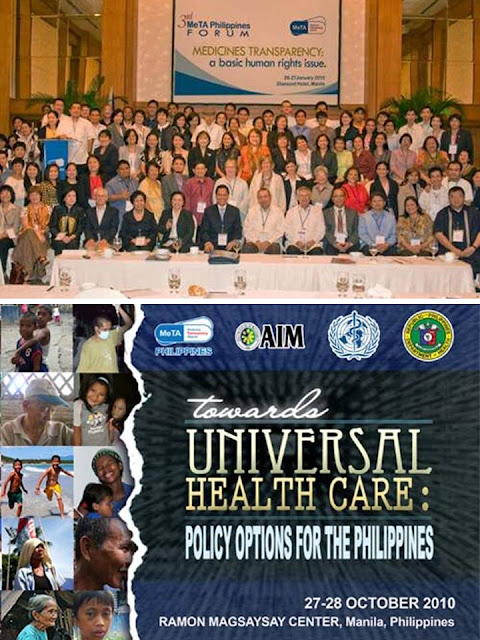 More multi-stakeholder discussion workshops by MeTA sometime in March 2010. I was not there. Lower photo, I like that shot of a friend, respected academic and immediate past Director of FDA, Doc Suzette Lazo, speaking, nice. 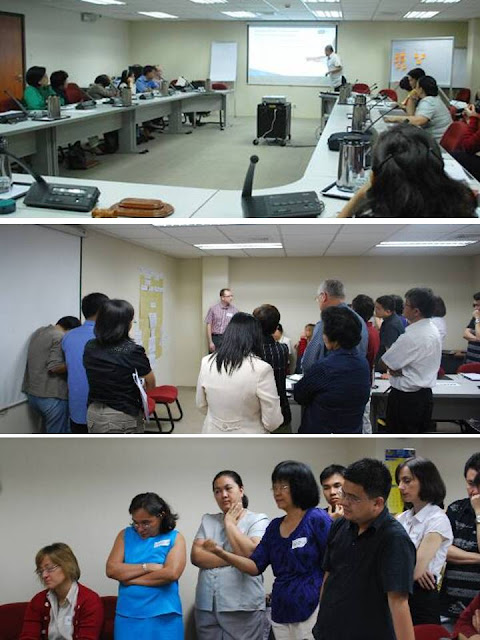 We also have several discussions on our own in CHAT, photos below. MeTA Philippines alloted a separate budget for CHAT to conduct various health education and discussion activities. 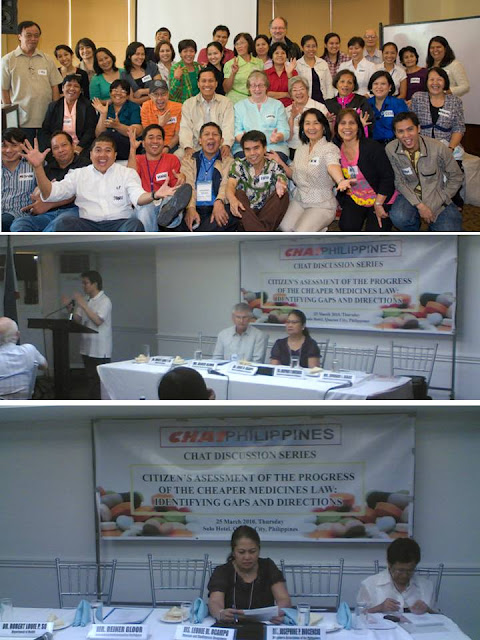 I am thankful for the nth time, to MeTA Philippines and its multi-stakeholder process in policy discussions. Many members of the MeTA Council are also members of the DOH ACH. They have different agenda topics though as the latter is focused more on policy advice on certain issues to the DOH Secretary while those of MeTA are topics that each member and organization representatives should do in collaboration with each other.

Recently, MeTa decided to expand membership of the Council. They will also be charging annual membership fees to members, both as organizational representatives and as individuals. For me this is a good move. A civil society organization like MeTA Philippines, should be able to raise funds internally through annual dues and other activities, and be less dependent on assistance from UK's Department for International Development (DFID) and WHO.