* This is my article today in TV5's news portal,
http://www.interaksyon.com/business/42796/fat-free-economics-healthcare-as-right-responsibility
--------- 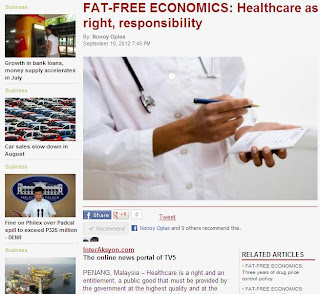 That is a formula for high disappointment and social conflict, both in the present and in the future. While it is true that healthcare is a right, it is also a responsibility, a personal and parental, guardian, and civil society responsibility, with or without government assistance. Rights without responsibilities, entitlements without obligations, will encourage politically noisy but economically lazy citizens. And society cannot progress in such condition.

Our seminar on “Promoting Markets in Healthcare” ended Sunday. Participants from independent think tanks from China, India, Indonesia, Malaysia and the Philippines exchanged notes on how civil society and the private sector can optimally provide healthcare to the public at the least politics, least coercion and taxation possible. The event was sponsored by a new global think tank, the Emerging Markets Health Network based in London, and the Institute for Democracy and Economic Affairs based in Kuala Lumpur. Both are espousing free market and more individual freedom philosophy.

There were several presentations made by speakers from different countries. Liew Chin Tong, a member of the Malaysian Federal Parliament, observed that the federal government is acting like a businessman in healthcare, banking and many other sectors as the government owns many hospitals, including “private” ones. He said the role of the government is to be an enabler, to provide equal opportunity to the people especially the poor, and not as businessman. 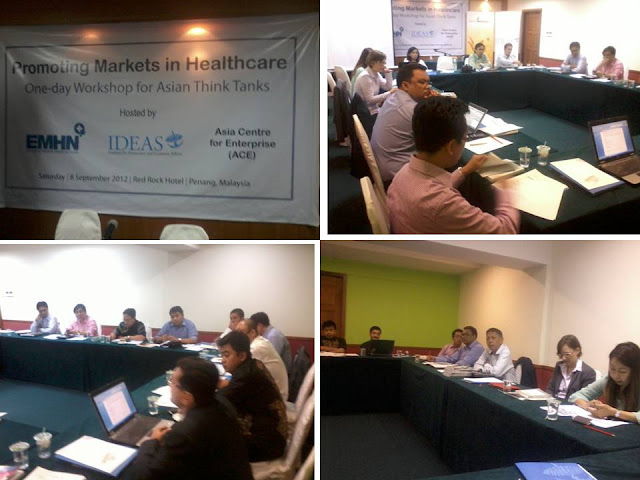 Frank Largo, a fellow Filipino who chairs the Department of Economics of the University of San Carlos in Cebu City, said that while healthcare is often an emotional issue, not every case is an emergency, and there is a big role for market and civil society players and providers especially in non-emergency cases. That there is a big gap between curative and preventive healthcare, and that there is bias among many academics, especially health economists, for more government intervention in healthcare.

Dr. Debashis Chakraborty, an economics professor at the Indian Institute of Foreign Trade noted the role of public-private partnership in India in the provision of various healthcare services, the inefficiencies or even absence of government healthcare service in many rural and far flung areas. This provides big opportunity for civil society and market players in non-state provision of healthcare.

Philip Stevens, the founder of EMHN, noted that the National Health Service of the UK government is a healthcare monopoly and is showing various forms of inefficiency like long waiting period for patients, and lack of innovation, which is a common practice in situations where no competition exists.

Prof. Yu Hui of the Chinese Academy of Social Sciences and director of China Research Center for Public Policy, and Prof. Feng Xingyuan of the China Academy of Social Sciences and vice-director of Unirule Institute of Economics, made a joint presentation, “Development of Private Hospitals in China and Lessons for Other Countries”. Below are some of the presentations. 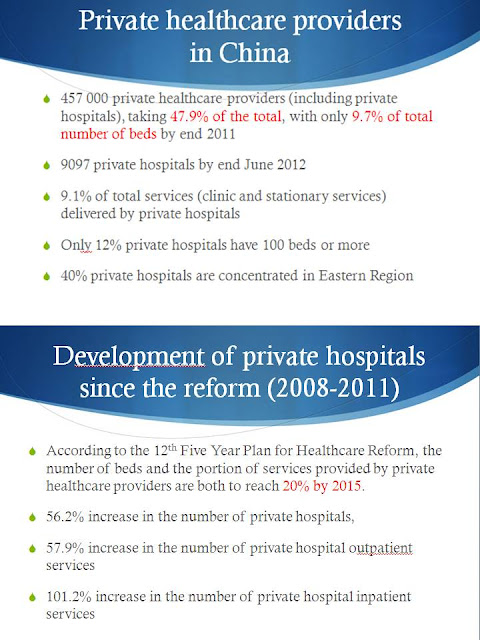 But while there are explicit announcements by the Chinese government to encourage the development of more private hospitals and other healthcare providers, the entrenched interests in the public health sector is making this far from attainable. 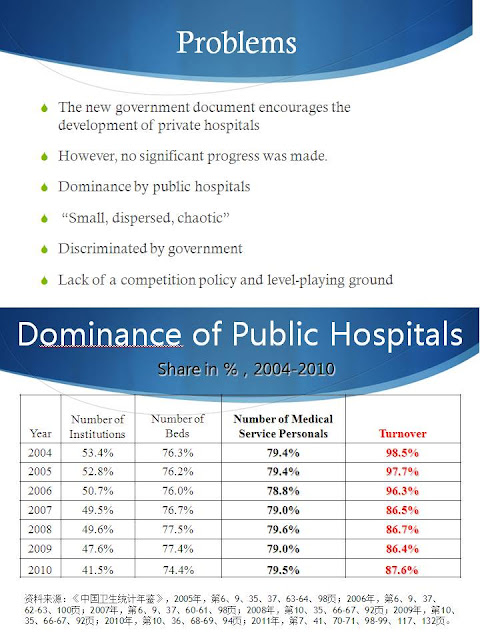 They suggested (a) competition for the sector, (b) equal inclusion of private hospitals in the Social Medicare Insurance scheme, (c) privatization of some state-owned hospitals, and (d) mobility of healthcare providers in terms of fair promotion, especially among health professionals in the private sector.

Dr. Chua Hong Teck, director of the Healthcare and Low Income Households, Performance Management and Delivery Unit under the Office of the Prime Minister, presented lots of data about the healthcare system in Malaysia (see below). 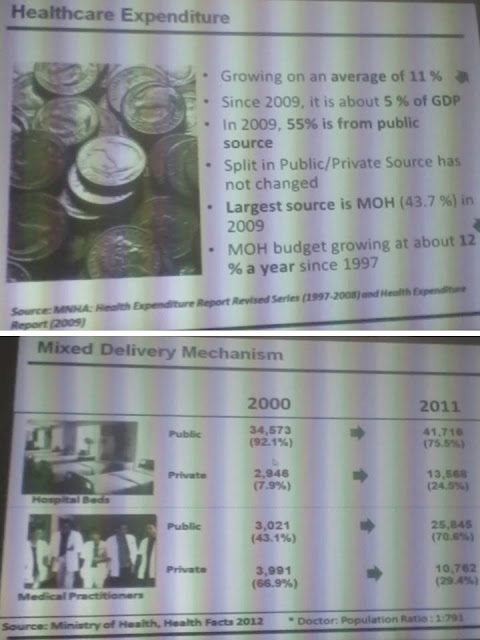 Healthcare is the fastest growing sector in the Malaysian government. This is a result of high expectations by both the public and policy makers, that healthcare should be provided to all citizens at the highest quality and at the lowest cost, free for the very poor, as much as possible. This is not happening of course, as the presence of private hospitals is rising, implying there is rising demand and expectations on public healthcare that are not met and provided.

The lower table shows that the number of beds in private hospitals was rising from 2000 to 2011,but the number of health professionals for the same period was declining. This implies one thing: physicians and other health professionals in private hospitals are over-worked or simply more efficient, producing more health services at lower manpower input, while those in public hospitals are underworked or simply bloated. I could be wrong but this is the most proximate explanation that I can see.

Dr. Chua said the following are the challenges for the non-state sector in healthcare: (a) enforcement of Private Healthcare Facilities Act of 1998 with regulations of 2006, (b) financing of these services and management of these facilities, and (c) ability to co-exist and compete with the public healthcare system.

High spending in public healthcare is among the major deficit generators and debt creators in many rich countries now. If a service is provided for free or at highly subsidized rates, expect the demand to be larger than the supply always. The result of such a wide gap between demand and supply is (a) healthcare rationing like long waiting period for non-emergency cases, or (b) generally poor quality delivery or provision of a service, or (c) continued bleeding of fiscal condition with sustained high borrowings to finance the system, or (d) all of the above.

If we recognize that healthcare is a right and a responsibility at the same time, then it should be recognized that those who want good quality healthcare must pay for it as much as possible. This will open up the discussion on the importance of preventive healthcare, that people own their bodies, not the government. So if people will abuse their body, no amount of government healthcare subsidy and borrowings will remedy the situation.

The case of infectious diseases on certain occasions like the spread of leptospirosis during heavy flooding, and pediatric diseases like childhood cancer, can be a separate case where taxpayer-financed healthcare is justified.

Removing or reducing the fat and bureaucracies in government healthcare system is the way not only to help address the bleeding public debt problem in the Philippines and in many other countries, but also to inculcate the age-old dictum: rights and responsibilities, entitlements and obligations go together.
---------