* This is my article in the online magazine yesterday,
http://www.thelobbyist.biz/perspectives/less-gorvernment/1349-healthcare-competition-and-government.
I also wrote a longer version in interaksyon.com.
----------- 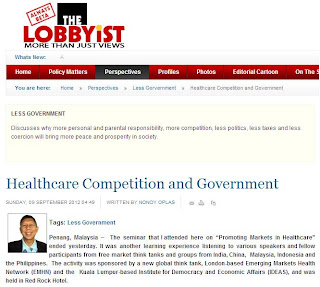 Penang, Malaysia – The seminar that I attended here on “Promoting Markets in Healthcare” ended yesterday. It was another learning experience listening to various speakers and fellow participants from free market think tanks and groups from India, China, Malaysia, Indonesia and the Philippines. The activity was sponsored by a new global think tank, London-based Emerging Markets Health Network (EMHN) and the Kuala Lumpur-based Institute for Democracy and Economic Affairs (IDEAS), and was held in Red Rock Hotel.

The focus was how to free from politics, or how to minimize political interventions and the various inefficiencies associated with it, in the delivery of healthcare to the public, with greater role to be assumed by civil society and the private sector. In short, healthcare provision at the least politics, least taxation and borrowings possible.

Among the speakers yesterday were the following.

Liew Chin Tong, a member of the Malaysian Parliament. He noted that the main role of a government is to provide equal opportunity to the people, to be an enabler of the less privileged so they can improve their lives later on. But the Malaysian federal government has been acting like a big businessman, owning many banks and hospitals, even private hospitals with substantial share ownership in them.

Frank Largo, the head of the Economics Department of the University of San Carlos (USC) in Cebu City. Frank has a unique role because he teaches Economics not only to Econ majors, but also to Nursing and Pharmacy majors who are required to take a subject on health economics. He said that while there are lots of emotions involved in the discussion of health policies, not all health cases are emergency. That the gap between curative and preventive healthcare is big, public resources is heavily focused or biased on curative health.

On a side note, Frank’s graduate Economics students organized a forum about the Cheaper Medicines Law in USC about two years ago, and I was one of the speakers there. I talked about “Property right and policy left” of the law.

Prof. Yu Hui of the Chinese Academy of Social Sciences (CASS) and Prof. Feng Xingyuan of the Rural Development Institute and Vice-Director of Unirule Institute of Economics, made a joint presentation entitled “Development of Private Hospitals in China and Lessons for Other Countries”.

In their presentation, they showed some data like as of 2011, there were 457,000 private healthcare providers including private hospitals or 48 percent of total. But these private enterprises comprise only 10 percent of total hospital beds.

Below are some data regarding the dominance of government hospitals despite public pronouncements of encouraging private hospitals and other healthcare providers, as well as the reforms they think should be done. 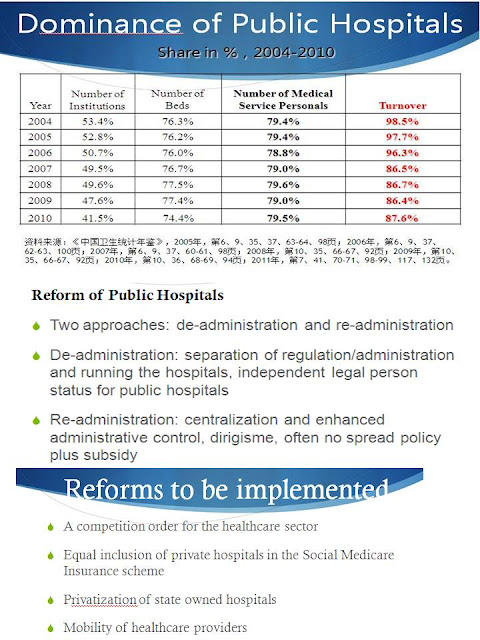 Dr. Debashis Chakraborty, a Professor of Economics at the Indian Institute of Foreign Trade in Delhi said there is an important role for public-private partnership (PPP) in providing healthcare services.

Philip Stevens, the founder of EMHN, narrated how the UK government healthcare monopoly, the National Health Service (NHS), is one proof of the problem of centralizing and politicizing healthcare provision. Long waiting period for patients, insufficient supply of certain medicines in some government hospitals, lack of innovation and cost-cutting measures, are among the ills that plague the NHS and other government-nationalized or centralized healthcare systems.

Dr. Chua Hong Teck, Director of the Healthcare and Low Income Households, Performance Management and Delivery Unit (PEMANDU) under the Office of the Prime Minister, presented a number of interesting of data on Malaysia’s healthcare system.

The number of beds in private hospitals is rising from eight percent of total beds in 2000 to 24.5 percent in 2011, but the number of health professionals is declining from 67 percent of national total in 2000 to only 29 percent in 2011. This suggests to me that health professionals in private hospitals are over-worked or simply are more efficient, while those in government hospitals are underworked or bloated.

Tables below, healthcare spending is led by MOH at 43.7 percent of total, followed by out of pocket (OOP) or private spending at 35.6 percent, then the Ministry of Higher Education (MHE) at six percent, and the other agencies have small or minimal shares. The Ministry of Defense also has its own hospital and they treat not only its own personnel and their dependents, but even ordinary citizens can go to their facilities and get free or subsidized healthcare. 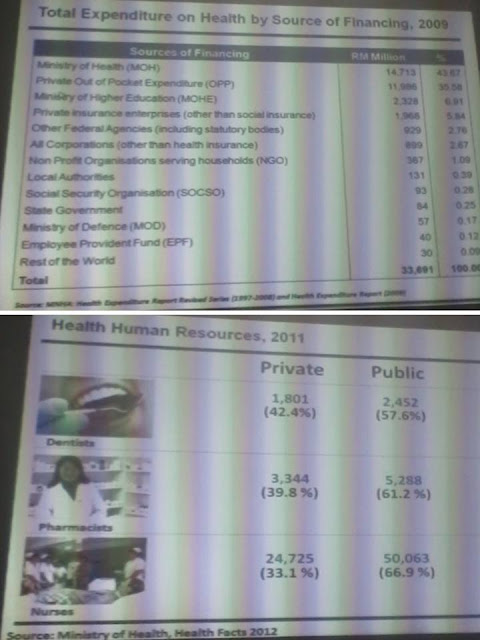 Can healthcare, especially those provided by the government, national and local, be depoliticized? Can real competition happen between public and private healthcare enterprises?

From my observation in the Philippines and other countries, the answer I think is No. Government being a regulator and a player at the same time already gives undue advantage to public health institutions. Besides, they get subsidies from taxpayers while private enterprises are being taxed.

When a commodity or a service is provided for free or at highly subsidized rate, we can expect that the demand will be larger than the supply, always. For instance, someone who has a headache might demand a CT scan or MRI tests to find out if there are other hidden causes of the headache. And why not demand, it is free or heavily subsidized anyway. This will put heavy pressure and use on the facilities and personnel of the public healthcare sector, resulting in high costs, healthcare rationing like long waiting period for non-emergency cases patients, or poor quality delivery or provision of a service.

Healthcare competition among different service providers – national government, local government, civil society and charity organizations, corporate and for-profit businesses – will result in better health service provision to the public at lesser cost. Competitors are always under pressure to give value for money to their clients as the latter have the option to opt out and go to another service provider.

On another note, I enjoyed the food and local cuisine here. There are many food shops and stalls almost everywhere, selling Malaysian, Chinese or Indian food. Our local hosts told us that if one is busy, it is much cheaper to eat outside than do groceries and cook food in the house.

The food competition in Penang and other parts of Malaysia, and almost elsewhere in the planet, is perhaps the best and solid proof that depoliticizing an important service like healthcare is best for the public, whether in the short- or long-term.
---------