Drug Price Control 30: Reversing the Policy on AC Resolution in 2009

There was another lively, good attendance meeting of the DOH Advisory Council on Healthcare (ACH) last  Wednesday, September 12, 2012. It is good that the meeting is now made regular, once a quarter or four times a year. Last Wednesday meeting was the third this year, including the emergency meeting last month, August 15. See my notes on the meeting that day, Drug Price Control 29: MRP Attempt Over Anti-Leptospirosis Drug.

Below, some photos of the meeting. Lower right photo is from an older AC meeting. I used it to fill up a space as I took only three photos last Wednesday :-) 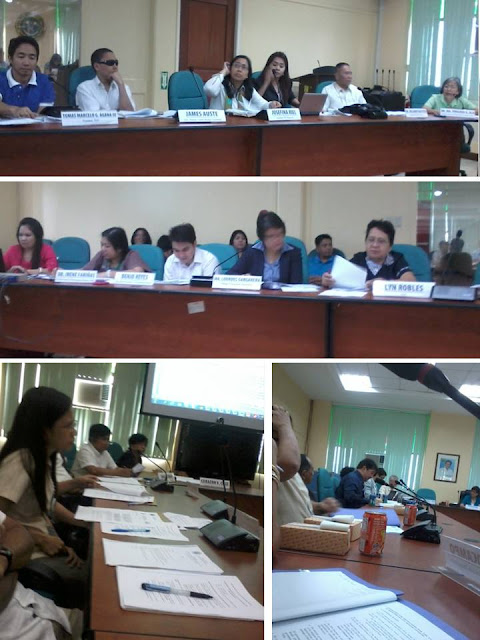 There were seven items on the agenda:
1. Issues on the implementation of the Senior Citizens Discount (SCD), mandatory 20 percent discount
2. Implementation of the Electronic Drug Price Monitoring System (EDPMS)
3. Updates on the FDA Act
4. DOH position on the proposed amendments to RA 9502, namely the creation of a drug price regulations board (DPRB)
5. Organization and functions of the ACH
6. Complete Treat packs for outpatient care, and
7. Mechanisms to address request for price increase in drugs under MRP or drug price control.

From the above agenda, one can see that there are different types of drug price control, explicit and implicit, that are currently implemented. The explicit price controls are:
a. the existing 50 percent mandatory price cut for the 22 molecules as implemented since mid-August 2009.
b. the mandatory 20 percent discount for senior citizens (SC) and persons with disabilities (PWDs), but it's more with the SC.

The implicit control is done via price monitoring through the EDPMS. If the price of certain drugs in some pharmacies or drugstores is much higher compared to those in many other pharmacies, that will invite an inspection and monitoring by the DOH or the FDA. The bill on DPRB is not yet implemented, it functions only as a threat to various players in the pharma manufacturing, wholesaling and retailing businesses.

Right now there is a conflict among drug manufacturers, distributors, wholesalers and retailers in the distribution or sharing of the burden of this cost imposed on them by the government. When the government enacted RA 9994 or the "Expanded Senior Citizens Act of 2010", the government simply declared, "You various players, you give mandatory 20 percent discount to senior citizens. This is on top of the mandatory 50 percent price discount on the 21 molecules, on top of the various taxes and regulatory fees that we collect from you, on top of other regulations that you must comply."

It is not clear how much of those cost borne by various players are tax deductible or considered as costs and are deductible to overall revenues, to be considered by the Bureau of Internal Revenue (BIR) and the Department of Finance (DOF). What I know is that the DOF is hard-pressed to negate or deny as many requests for tax credits as much as possible, and to impose higher taxes whenever possible, due to the never-say-die budget deficit every year and the ever-rising public debt. In which case, it shows government hypocrisy to create certain subsidies but itself is not willing to share the cost of such welfare programs.

The members of the ACH agreed to have another working group meeting, with the presence of the BIR and DOF people so they can state categorically which costs are to be considered as tax creditable and/or part of operating costs and which ones are not.

Besides, players operate based on the brand that they have cultivated for years. For instance, Mercury boasts of "gamot laging bago" (medicines are always new) brand, Watsons declares "your personal store" brand, The Generics Pharmacy advertises "gamot mabisa na, matipid pa" (effective and cheap medicines) brand, other independent or non-chain drugstores also have their own brands often associated with cheaper medicines. So when patients and consumers go to Mercury or Watsons, drug prices there are almost always higher than those from other smaller and non-chain drugstores. That quickly solves the information asymmetry (or imbalance info) problem for patients. If they want cheap medicines, it would help if they skip Mercury and Watsons right away, and go there only if the medicines they are looking for are not available in the smaller  drugstores.

When the government imposes mandatory compliance with EDPMS, all drugstores and pharmacies have to devout resources like computers, time and manpower, which contributes to higher operating costs, which they will have to pass on to the consumers in the form of higher prices. And so the goal of having lower medicine prices for the consumers is partly or indirectly defeated or negated.

But since that regulation is already in place, it would help if the new or a revised Administrative Order (AO) to be issued by the DOH implementing the EDPMS should be kept as short and as clearly as possible. The current AO is 16 pages long.

On agenda item #4, the DOH gave us a copy of its official position on SB 5 by Sen. Loren Legarda and SB 2960 by Sen. Manny Villar, dated 22 May 2012. The DOH made an explicit position of not supporting the creation of DPRB. Cheers to the DOH. It added that "Drug price regulation has the potential to limit access to quality essential drugs."

When the agenda went to item #7 above, on requests for price increase by some pharma companies whose products were covered by the price control or maximum retail price (MRP), there were proposals for the ACH to devise some criteria whether to grant such requests or not.

I spoke and argued that first of all, the price control policy was based on illegal criteria in the first place. I posted this last November 14, 2011:

See this comparison that I made. It shows that the criteria used by the DOH has zero basis in the law or its IRR. 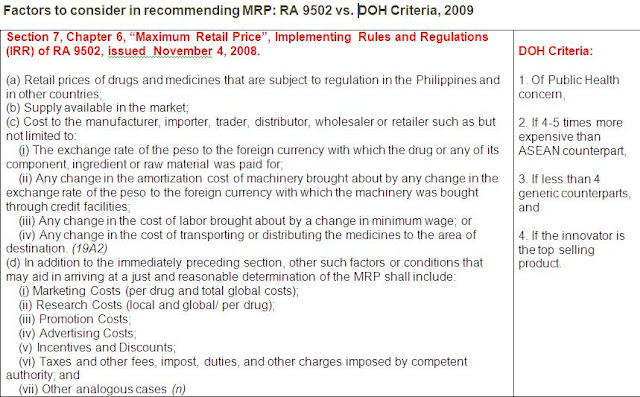 Read more at  Drug Price Control 21: Illegalities in the Implementation of the Policy.

Secondly, the second list of molecules on so-called "voluntary" price reduction in 2009 and was later illegally termed as GMAP or Gloria Macapagal Arroyo Price, was just an act and Resolution by the Advisory Council, and not an Executive Order (EO) coming from the President, or a law (RA) coming from Congress. Thus, it is possible for the ACH to issue another Resolution revoking the earlier Resolution issued in July 2009.

Is this possible? Yes, I think so, if heavy politics will not come to intervene.

I still vividly remember the AC meeting at the DOH on June 05, 2009, it was Friday afternoon. Majority or all members of the Council except James Auste of the Cancer Warrior Foundation (CWF) did not favor the imposition of price control based on the four criteria that was suggested by the IMS  as commissioned by the DTI and/or the DOH. What the body agreed was to discourage or disallow the Discount Cards program by Pfizer at that time as there was some ethical problems related to the practice. We were asked by then DOH UnderSecretary Alex Padilla, to send our written comments not later than June 06, Saturday. I and other members of the Council sent our written comments saying No to the proposed price control.

By Monday June 08,  then DOH Secretary Francisco Duque already announced in media, along with former Sen. Mar Roxas, that they have a list of drugs to be put under price control. In short, the agreement of the AC was totally not followed and junked. That is politics.

I think it is time now for the ACH to decide whether to junk the drug price control policy based on illegal criteria or not. I think there is less politics now over the DOH compared to mid-2009 where a Presidential election was coming up in less than a year then. Hence, the DOH and the ACH members can state more independently their position and not be cowed by a very influential Senator, or by an unpopular President serving her last year in office.

I hope that DOH USec. Madz Valera can put this as one of the agenda items in the next meeting of the ACH this coming December. I believe that the illegalities and heavy ugly politics around the policy made more than three years ago should be corrected and reversed now.
--------

".....the government simply declared, "You various players, you give mandatory 20 percent discount to senior citizens. This is on top of the mandatory 50 percent price discount on the 21 molecules, on top of the various taxes and regulatory fees that we collect from you, on top of other regulations that you must comply."

As a "surviving" independent pharmacy owner... i could say that your words above, clearly describe the current "SUPPORT" that we (retailers) are receiving from our government. With this kind of environment, I have personally witnessed the "death" of one independent community drugstore every year. I have articulated this concern to the local FDA office in our area, but they just commented that "kung may nagsasara, mas marami ang nagbubukas..." referring to the mushrooming growth of TheGenericsPharmacy (TGP). However, they failed to understand that the TGPs are "franchised" pharmacies... and my concern is the personal perception that the independent pharmacy industry is already dying. I really do not know since our local FDA office does not have the statistics. It is also my personal belief that the giant chain drugstores are not complaining about this government (or political) interventions because they are the ones that will benefit if independent pharmacies will not survive.

I hope you could also discuss this concern in your next ACH meeting... thanks... from a DSAP member