* This is my article today in the online magazine,
http://www.thelobbyist.biz/perspectives/less-gorvernment/1355-anti-smoke-belching-harassment-
-------------- 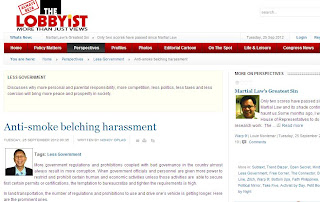 More government regulations and prohibitions coupled with bad governance in the country almost always result in more corruption. When government officials and personnel are given more power to restrict and prohibit certain human and economic activities unless those activities are  able to secure first certain permits or certifications, the temptation to bureaucratize and tighten the requirements is high.
In land transportation, the number of regulations and prohibitions to use and drive one’s vehicle is getting longer. Here are the prominent ones.
1.    A vehicle must undergo motor vehicle registration annually with the Land Transportation Office (LTO);
2.    Vehicle must take smoke emission test before it will be registered.
3.    Driver must have a valid license.
4.    Driver must take illegal drug use test before getting a license.
5.    Vehicle cannot be used or driven in Metro Manila on “number coding” day from 7am to 7pm one day a week, except on “open window” from 10am to 3pm, but not all cities recognize this window.
6.    Vehicle must “pass” random test by anti-smoke belching units (ASBU) of the MMDA and/or local governments
There are fines and penalties, up to impounding of a vehicle, if any or all of the above prohibitions are violated and the driver is caught.

I took these photos last September 12, 2012 in Buendia, Makati City. Usually about a dozen men would randomly stop a vehicle and force it to be tested for high smoke emission. 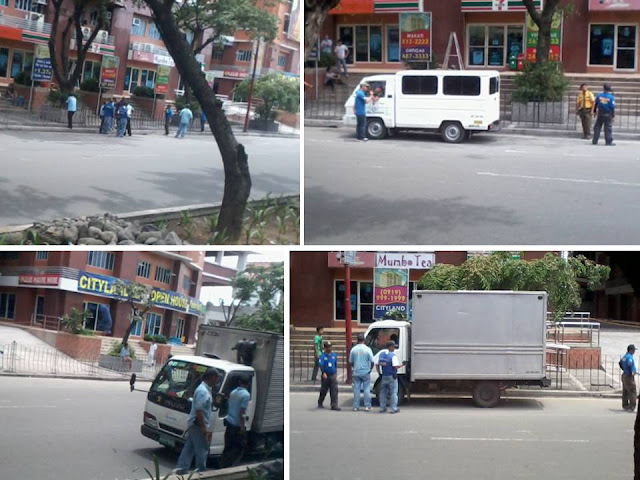 From the various testimonies and comments that I have read, almost no one would pass those tests by the ASBUs. The easiest way to avoid being penalized including removing the vehicle plate, according to several motorists who have experienced this kind of harassment, is to pay those ASBUs a certain amount of money.

When those ASBUs by local governments flag down and stop vehicles, they are in effect saying that "We do not care if your trip is important or not, we think your vehicle is a smoke-belcher. You must disprove that by passing our smoke emission test." This is passing the burden of proof on the vehicle owners and drivers, instead of the government showing the burden of proof first, before it can flag down and stop vehicles.

A similar analogy would be like this. Government officials and/or police can stop anyone walking in the street whose face they may not like and say, "We think you are a theft or a criminal. In order to disprove that, you should pass our lie detector test first before you can go."


In a free society, this should not be the case. In the absence of any initial or leading evidence,  government has no right to stop and harass the citizens. Government should have the burden of  proof and explain to the citizens why they are stopping them.

Below are some photos of real smoke belchers, I took them from various sources in the web. Most of those foul emitters are public vehicles – buses, jeepneys and tricycles, Note that among  such foul emitters are MMDA/other government vehicles themselves. 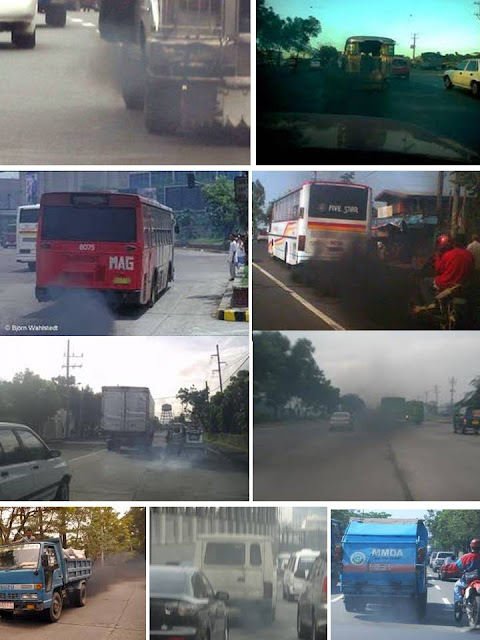 In order to dispel public perception that those ASB tests are for real and not for extortion, the government should assume the burden of proof in accusing or suspecting certain vehicles as smoke belchers.

For instance, ASBU guys stand in one intersection and take photos of vehicles which are obviously smoke belchers. Then communicate the information to the other ASBU guys ahead, to stop those vehicles for smoke emission test. This way, only a few motorists and their passengers will be inconvenienced.

Hoping that the Department of Environment and Natural Resources (DENR), the Metro Manila Development Authority (MMDA), and the various cities in Metro Manila and their respective ASBUs will take this proposal constructively.  Government personnel should not further harass the ordinary citizens and motorists as they are the taxpayers who pay for the salaries, allowances, bonuses, travels, vehicles, and other perks of those working in government.
---------