* This is the continuation of my discussion on the AIM lectures last Monday, September 03.  Here is the earlier discussion, Socialized Healthcare 7: Degnan and Wagner on ICIUM and UHC.

Dr. Anita Wagner presented a paper on Universal Coverage or Universal HealthCare (UHC) as used here in the Philippines or other countries. The three questions on expanding healthcare coverage are: (a) extend to non-contributors to the fund, the very poor? (b) expand HC services? and (c) reduce cost and mandatory fees? 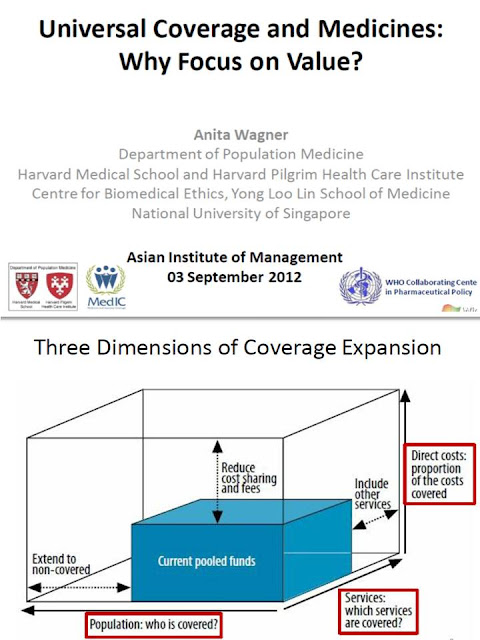 I believe in UHC, that everyone, from the poor to the rich, young and old, should have one form of health insurance that can cover both outpatient and hospitalization services. But I do not believe that it is only the government, or mainly the government, that should provide such service. I believe there is a big role for both corporate and civil society provision of healthcare at various levels: community or village, work place and offices, schools and universities. Just give the people various options and choices where and what kind of HC coverage at different price packages would satisfy their personal and household needs.
The medicines aspect of HC. The share of the "pharmerging" (emerging and industrializing economies' consumption of pharmaceutical products) markets to global medicines spending is rising, from only 14 percent of total world demand in 2006, to 20 percent last year, and projected to grow to 30 percent by 2016.

Table below shows that almost 30 percent of total HC spending in low-income countries goes to medicines alone, and only 18.2 percent for high incomes ones. 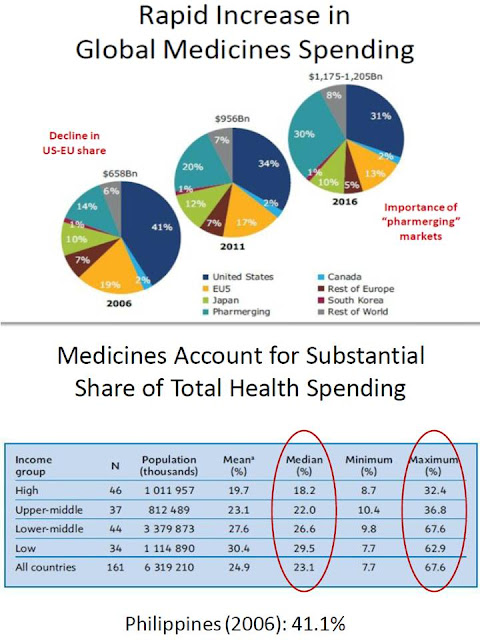 I think the main reason why the poor has a high percentage of their household healthcare spending  that goes to medicines is because they have no health insurance for outpatient services other than those offered by the nearby government clinic or hospital. For instance, when they have a headache or prolonged fever or bad stomach, among the first things they do is to buy medicines that they see are heavily advertised in tv, radio, billboards and newspapers or magazines. Or those that are recommended by their neighbors, family members and friends. They do not go to private clinics and physicians because physician consultation fee alone would be about the equivalent to one or two-day/s work. And if the physician would order a diagnostic test, the cost would soar further. So the solution is not to see a doctor and just self-medicate. So spending for professional fee and for diagnostic test/s is zero or near zero, the denominator is low, and that raises the share of medicines (the numerator) to total household health spending.
Below, the same story, that spending for medicines dominate the total household healthcare spending. And I offer the same explanation above why this is so. Low chart, same medicines, different cost. Naturally. Why? 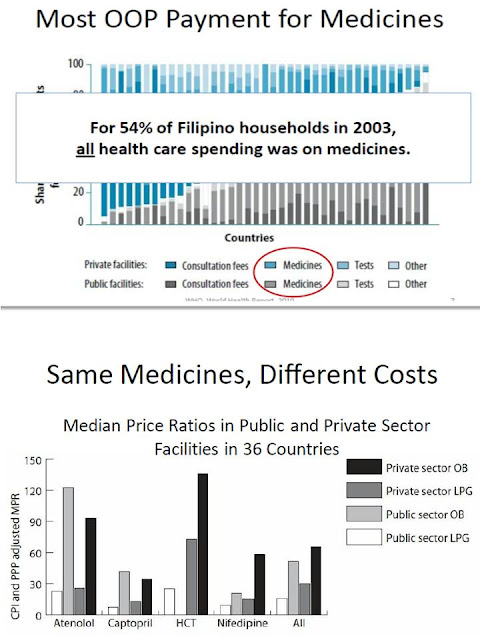 The same way that the price of soda (Coke or Pepsi, etc.) would vary from an ordinary variety (or "sari-sari") store to convenience store to a cheap restaurant to a fine dining resto to a hotel. A bottle of an 8 oz soda for instance can range from P8 to P70 depending on where one would buy the soft drink.
The price of medicines for the same molecule, same dosage, from the same manufacturer, can vary from one drugstore or pharmacy to another. A drugstore in a low-rental place, no air-conditioner, no licensed pharmacist, not paying multiple taxes, can sell medicines at very low price. A drugstore or pharmacy in a high-end mall, fully air-conditioned, has several licensed pharmacists, and complies with various/multiple taxes and regulatory fees, will have to pass on those costs to the price of their medicines. Hospitals will have additional costs to charge when they dispense medicines to their confined patients.
Below, the real big issue: the substandard and fake medicines. Between one-third to one-half of all anti-malaria drug artesunate in our region has no active ingredient, can you believe that? And close to 200,000 deaths in China alone are caused, directly or indirectly, by these substandard and fake medicines.
Lower chart, for rich countries, three or more treatment/s are being used for chronic cardiovascular diseases (CFD) while in poorer economies, there are mostly zero or just one treatment. 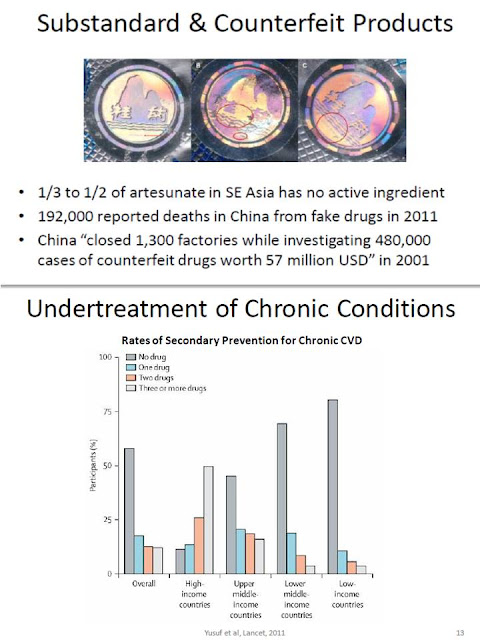 Anita showed two cartoons in her presentation. For the rich country, the pharmacy is full of different medicines and the number of patients is small. In a poor country, a small pharmacy with small stock of medicines is serving many patients, mostly mothers with young kids or babies in tow.


Below, a list of countries on the left and percentage adherence by patients to treatment. Poorer countries tend to have lower adherence and the global average was about 74 percent. And some data on PhilHealth. 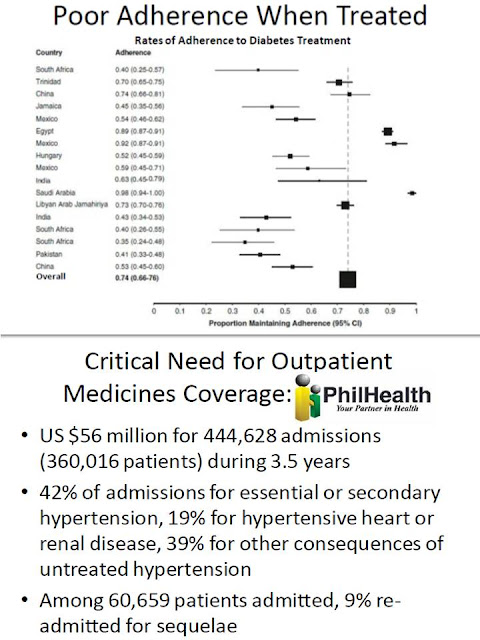 The slide below is cool. Anita said that based on the Medicines and Insurance Coverage (MedIC) study, the high focus or political attention to medicine prices has deflected public attention to the value and usefulness of medicines, as well as on their proper utilization. Then a concluding quote from WHO Director General Margaret Chan, made in May 2012. 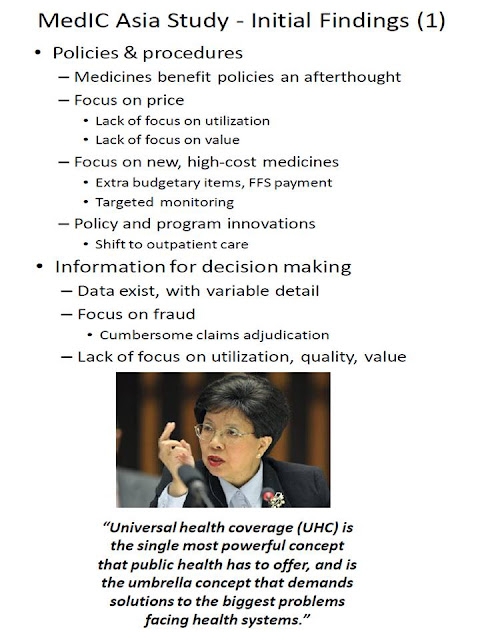 The "cheaper medicines" slogan and mantra is all around us. And it pressures governments, medicine producers, wholesalers and retailers, to provide the cheapest drugs whenever possible. And that is how very cheap but substandard and counterfeit medicines can easily come in. Many people are so hooked on getting cheap or free medicines, sometimes disregarding the circumstances how those medicines are made available at almost give away prices.

The most expensive drugs are those that do not work. Consider two medicines of same dosage against a particular disease. Drug A is only P10 while drug B is P1,000. A is either ineffective or a fake while B is slowly killing the cells and virus that cause the disease. A patient taking drug A continues to suffer, and may contract a new or additional disease as the original disease has already expanded and mutated into something more sinister and more lethal.

I agree with the statement by Dr. Margaret Chan. But if she refers mainly to governments, national and local, as the main provider of UHC, then I disagree with her. There are many private sector -- corporate entities, foundations and charity associations, health NGOs and other civil society organizations -- providers of affordable healthcare to the public. The competition, or simply the spirit of volunteerism among them, ensures that the public is served well.

The main role of government in this case, is to promulgate the rule of law. For instance, a manufacturer or trader that sells substandard or counterfeit medicines should get the strong arm of the state, they should be penalized heavily because they put public health in harm's way.

The audience were really hooked to the lectures and the open forum. The event was supposed to end at 6:30pm, it finally ended almost 7pm. Very few people left before the program ended. Photos below, Anita and Ross Degnan listening to questions from the audience, and Anita discussing with  Ms. Normita Leyesa, immediate Past President of the  Philippine Pharmacists Association (PPhA), after the program has officially ended. 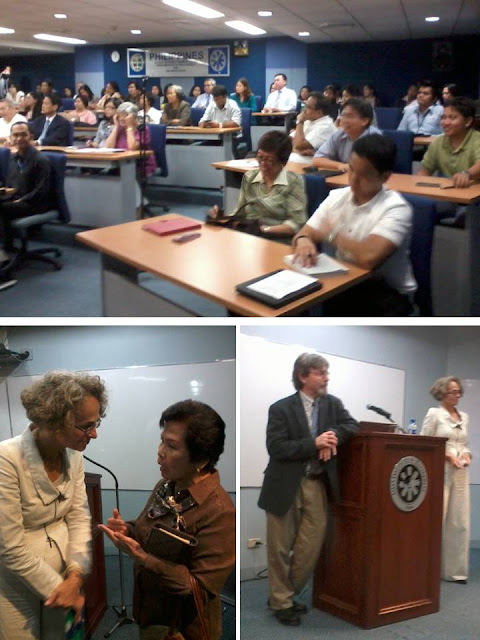 Hi, nice blog you have here, since you seem to put a good balance between libertarianism (many of which are usually anarchists, but not you) and necessary government interventionism (a.k.a. rule of law).

Anyway, on a slightly off-topic note, I notice your anti-RH arguments in your other entries make a lot more sense compared to the Church/CBCP or even compared to Sen. Tito Sotto.

So, I wonder if you're interested to engage Leloy Claudio and Miguel Syjuco in a hopefully friendly debate, kahit sa twitter lang, about the RH bill? ( If yes, here are their twitter accounts: @leloyclaudio and @MiguelSyjuco )

These two Ateneans (one a professor, the other a writer) are apparently challenging Sen. Sotto to a debate, which the senator is ignoring, understandably. (see here: http://www.gmanetwork.com/news/story/272179/opinion/a-tag-team-debate-challenge-for-tito-sen) But I'd think you might make a better replacement to Sotto.

(Marami kasing Ateneans na statist/pro-RH, I want to see how your arguments compare against them. hehe.) Ang yayabang din kasi nung iba. I just don't really have the patience to argue with people, so I'm passing it to you, if you're interested :), I'm Atenean too, by the way, but I don't really support the bill especially in its present form.

Thanks for the kind comments Dino. I have engaged many people in a debate already, my "Population Control" series plus the earlier "Responsible Parenthood cannot be legislated" are testament to it.

Am busy now as I have to go to Malaysia on Friday. Will pick up that RH statism again hopefully by next week. Cheers.