* This is my article yesterday in the online magazine,
http://www.thelobbyist.biz/perspectives/less-gorvernment/1348-philhealth-and-leptospirosis-patients
--------- 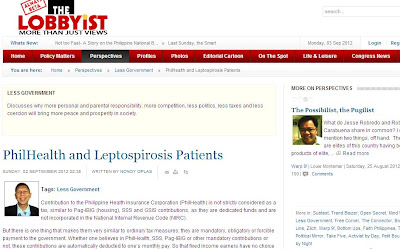 Contribution to the Philippine Health Insurance Corporation (PhilHealth) is not strictly considered as a tax, similar to Pag-IBIG (housing), SSS and GSIS contributions, as they are dedicated funds and are not incorporated in the National Internal Revenue Code (NIRC).

But there is one thing that makes them very similar to ordinary tax measures: they are mandatory, obligatory or forcible payment to the government. Whether one believes in PhilHealth, SSS, Pag-IBIG or other mandatory contributions or not, these contributions are automatically deducted to one’s monthly pay. So that fixed income earners have no choice but to pay for these three mandatory contributions each month, on top of the monthly withholding personal income tax.

The Department of Health (DOH), the mother agency of PhilHealth, announced last week that

(P)ersons in areas affected by the heavy southwest monsoon rains and diagnosed with leptospirosis shall be automatically covered by the PhilHealth, including non-members…

According to PhilHealth Circular 39 series of 2012, non-members living in these flood-stricken areas shall also be accorded the benefits due the PhilHealth Sponsored Program members/beneficiaries. For non-members less than 21 years of age whose parents are neither member, one parent shall be automatically covered.

Being automatically covered as PhilHealth Sponsored program members mean that they shall not be required to pay premiums and that they shall be considered members for the period from August 1, 2012 to July 31, 2013, with a number card. This privilege shall be applicable for all admissions starting 7 August to the end of this month.

This would sound unfair to regularly-paying PhilHealth members as their contributions that can be considered as additional “health tax” are being used to support people who do not contribute to the fund. There is already the DOH budget that is partly financed by their regular tax payment (income tax, VAT, excise tax, import tax, etc.), or local government units that are financed by internal revenue allotment (IRA) and local taxes, that are supposed to help these people.

There is validity in this argument. Many regularly paying members in the formal sector complain that when they or their dependents are hospitalized, PhilHealth share or deduction to total hospital bill is sometimes small, that PhilHealth can be “stingy” to them who religiously pay monthly for many years while PhilHealth can be gallant in paying the hospitalization bill of those who do not contribute to the fund.

I share the above opinion. But I also recognize that leptospirosis, being an infectious and lethal disease, can be very costly to the poor whose houses are already submerged in floodwater for many hours or days. So social contribution like PhilHealth assistance can be a great support for these poor people.

The DOH reported that “a total of 2,471 leptospirosis cases were reported nationwide from January 1 to August 18 this year. This is 62% higher compared to the same time period last year (1,522 cases). There were 121 deaths…. hospital admissions of Leptospirosis in Metro Manila from August 5-22 already included 783 cases and 34 deaths.”

There is lesson for the government here in the light of endless budget deficit (revenues are lower than expenditures) and ever-rising public debt. The limited funding of the DOH and local government units’ healthcare programs should be focused on dealing with infectious or communicable diseases as well as children’s diseases. There are many infectious diseases that remain lethal until now aside from leptospirosis: dengue, malaria, menningococcemia, hand foot and mouth disease (HFMD), typhoid fever, cholera and many others.

Using taxpayers’ money and the health tax or PhilHealth mandatory contribution to treat lifestyle-related diseases by non-members is not fair. No one put a gun on people’s heads so that they should over-drink or over-smoke or over-eat or ovet-sit. Engaging in the said activities will hasten the onslaught of various type of diseases like cardiovascular, cerebrovascular, malignant neoplasm or cancer various types, tuberculosis and diabetes.

The important point is that DOH budget, PhilHealth fund, and LGUs’ health spending should be concentrated in dealing with various infectious and pediatric diseases. And even to help people with physical or mental challenges like the blind, the deaf, crippled, autistic and related cases.

Taxpayers and PhilHealth members who regularly pay their taxes and mandatory contributions would not feel being cheated this way.
--------