* This is my article yesterday in TV5's news portal,
http://www.interaksyon.com/business/43681/fat-free-economics-trimming-govt-fat-requires-changing-publics-expectations
---------- 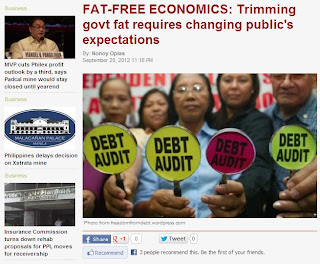 One of the major perks in government is that one can always live beyond one’s means, to spend larger than projected revenues or income, then just borrow like crazy as lenders are more than willing to lend because government has one huge pool of collateral who are sure to pay a stockpiling debt today and in the future: the taxpayers.

This moral hazard– a person, an institution, etc. can become complacent and irresponsible because someone else is going to pay for whatever mistake in decision, action or inaction made – is perhaps the single biggest explanation why so many governments around the world, rich and poor alike, are heavily indebted. The incumbent politicians shower various forms of subsidies and welfare programs to certain blocks of voters in order to be elected or reelected, and let the future administrations worry where to get the money for the over-spending and over-borrowing made in the past and the present.

We often hear that the country’s fiscal condition has stabilized, resulting in some credit ratings upgrade. The Philippine government, or companies which are based in the country, can borrow domestically or internationally and enjoy lower interest rates compared to a few years ago.
While there is truth to this statement, the fact remains that the government cannot avoid drastically cutting the need to borrow to finance a budget deficit, or stop borrowing even for one year. And while new foreign debt securities carry lower interest rates compared to those made a few years ago, the overall interest payment remains huge, if not rising.

In the table below, only those debt securities that charge $50 million a year or higher are included,  and these items were all contracted for budgetary support or financing the deficit. Multilateral and bilateral loans like from entities like the ADB, WB and JICA, are mainly project loans. 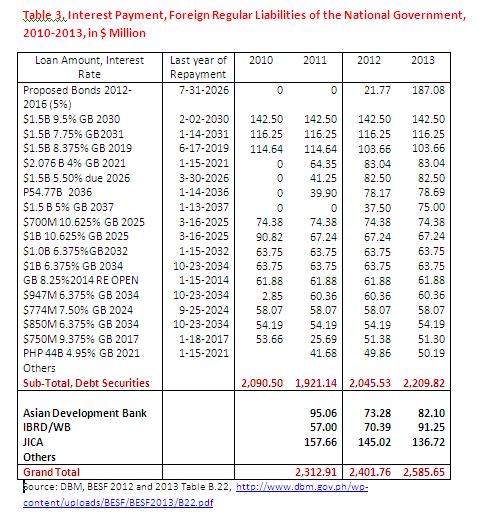 While the fiscal condition of the Philippine government is not as severe as those in some European economies like Greece, Portugal and Spain, this is not an excuse for not doing certain reforms like drastically cutting borrowing and spending to what projected revenues can finance and sustain.

There are two important revenue measures that can be realized in the short term, meaning within one or two years, and can be used to cut borrowing and the public debt and hence, annual interest payments. These are (a) revenues from the hike in excise tax of “sin products” like tobacco and alcohol, and (b) privatization of the Philippine Amusement and Gaming Corporation.

Cutting the public debt by say P200 billion, at say 8 percent interest rate, would mean an annual savings of P16 billion. This savings can be used to finance certain programs that would require new borrowings. Unfortunately, the projected revenues from the proposed sin tax hike has already been earmarked or pre-allocated to finance universal health care of PhilHealth and the Department of Health. In the meantime, Pagcor’s privatization is not moving fast enough.

If these measures with huge potential revenues are not passed into law, then another alternative is simply to cut spending, especially in departments and agencies that have no clear contribution to improving the country’s productivity like the Department of National Defense. Or a cut in the budget of public tertiary education, the state universities and colleges and the corruption-prone Department of Public Works and Highways.

Governments will keep expanding along with its coercive powers if people do not assume more personal and parental/guardian responsibility, more civil society roles, in running their own lives, their households and communities.  Public spending and indebtedness will keep rising if it is deemed government’s “responsibility” to purchase small items like condoms and pills, and medicines and healthcare for adults who abuse their own body with over-drinking, over-smoking or over-eating.

Cutting the fat and pork in government spending can start by cutting the unnecessary expectations of the public on the roles and functions of government.
----------