Government healthcare spending is among the biggest items in the national budget. Such spending is not limited to the budget of the (a) Department of Health (DOH) but also to (b) state universities like the PGH under the UP budget, (c) DND and DILG for the AFP and PNP Hospitals, (d) PCSO, PAGCOR which give away ambulances and provide hospitalization coverage to some poor people, (e) other Departments and national government agencies, (f) local governments with their respective city/district/provincial hospitals, (g) charity groups, corporate foundations, company spending, and so on. See my previous discussion here,  Healthcare Competition 9: Deregulate Further the Supply of Healthcare.

That is why I think the estimated national health spending of around 3.8 percent of GDP is understated. I think that ratio refers only to DOH and other national government spending for health. If we include all the above mentioned offices and institutions' spending, it should easily reach 5 percent or higher.

Anway, I attended the DOH budget presentation at the Senate last September 04. Below are some of the powerpoint slides presented by DOH Secretary Enrique Ona. Thanks to Mercy Fabros of WomanHealth who posted the presentation to our CHAT discussion group.

From P42 billion this year to P53 billion next year or a jump of P11 billion in one year. Percentage wise, the DOH along with the DSWD budget have among the highest, if not the highest, growth rate next year.  The Office of the Secretary (OSec) and the HFEP are the biggest items. 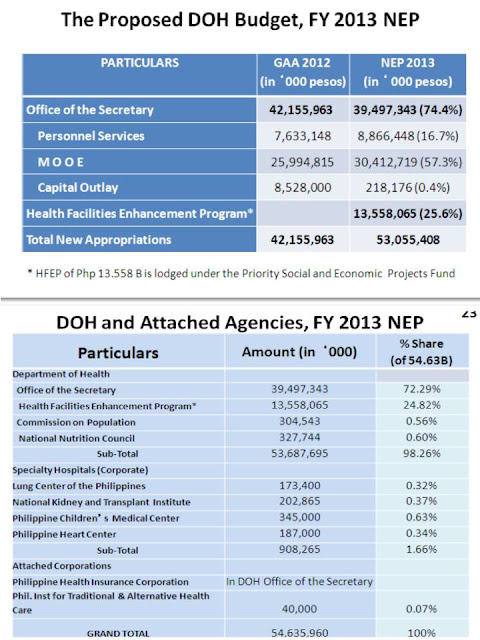 See the huge spike in DOH budget, rising by about P9 billion a year on average from 2010 to 2013. Allocation for sponsored program or subsidies for poor households to become PhilHealth members, is the main explanation for this huge jump. This function should have been done by the local government units (LGUs) but many of them  are not doing their job, so the DOH has re-centralized this function. Healthcare is among the services that were devolved and decentralized from the DOH to the LGUs when the Local Government Code (LGC) of 1991 was enacted. But recently, the move has been towards re-centralization. 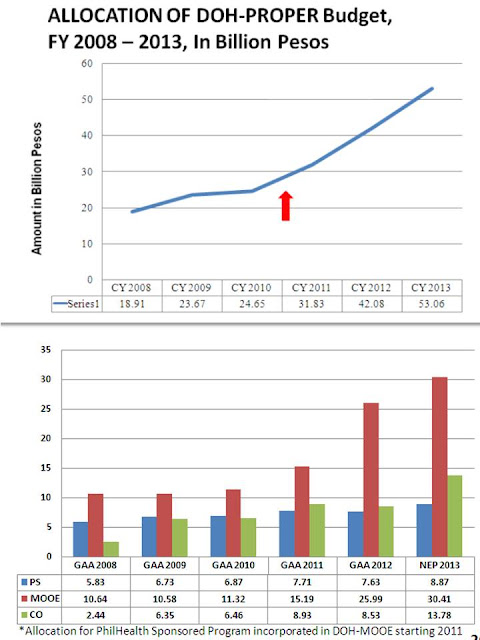 Subsidy to the poor to become PhilHealth members and HFEP are the two largest items in the DOH budget.  The latter are spending for barangay health centers, rural health units, and DOH-retained hospitals. 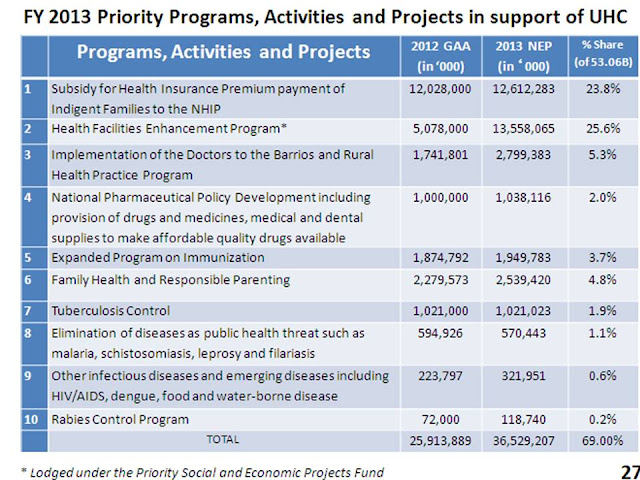 Contrary to the campaign of many pro-RH (Reproductive Health) bill advocates that we need a new law on RH to allow the government huge spending for various services on "population management" or simply population control, the DOH is allocating P2.5 B for RH alone. The biggest items there are (a) the procurement of various population control supplies like condoms and pills, (b) deployment of community health teams (CHT) and (c) vaccination campaigns. 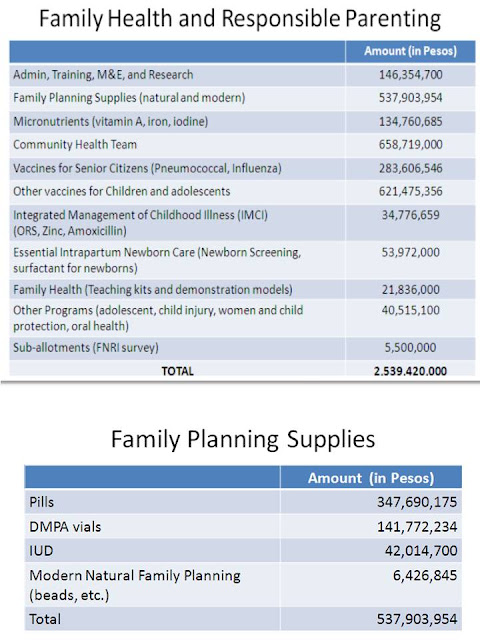 DOH allocation for the purchase of medicines is huge, more than P1 billion next year, including medicines for NCDs. 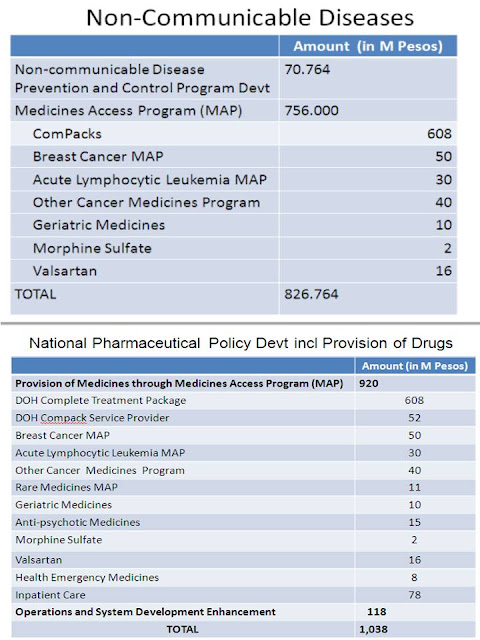 Here is some breakdown of DOH budget from 2008 up to next year. 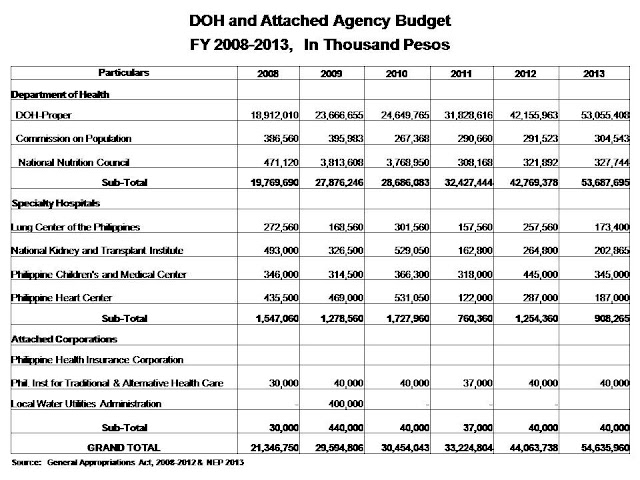 And here is the list of the huge DOH hospitals. It is led by the National Center for Mental Health, East Avenue Medical Center, Jose Reyes Hospital and the Orthopedic Center. 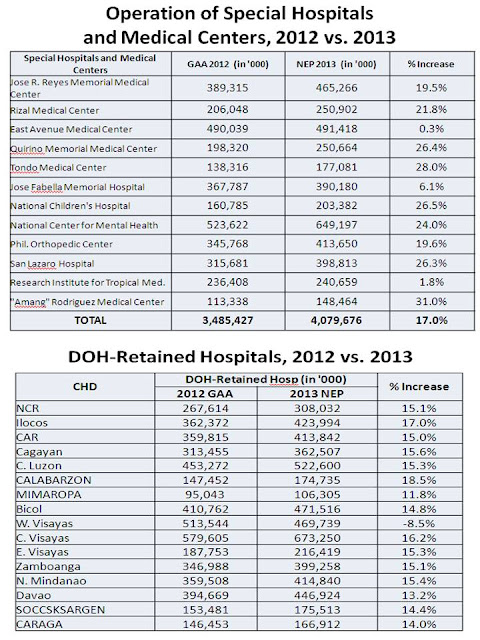 Not including budget allocation for interest payment of various government public debt, as well as transfers to LGUs via the Internal Revenue Allotment (IRA), DOH budget is now the 7th biggest item in the national budget. 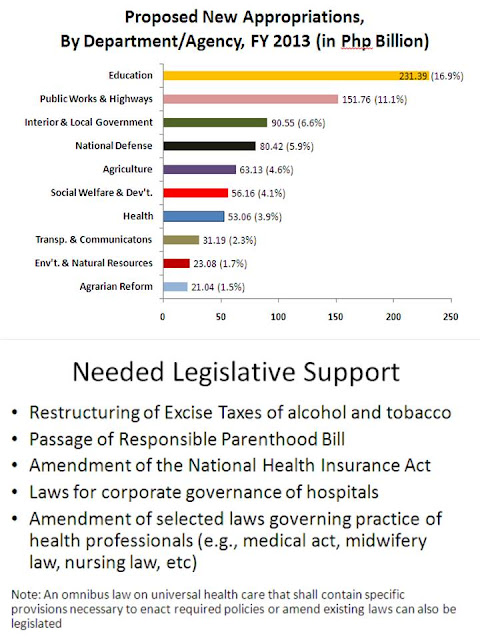 While I recognize that healthcare is a very important concern for the people, I do not believe that most of  these functions should be given to the government, national or local because that would mean more spend-spend-spend, tax-tax-tax and endless borrowings to keep up with high, unsustainable and bottomless health spending. Do people need the government to remind them that over-drinking, over-smoking, over-eating and over-sitting is bad for their health? That they need to clean their hands well before eating, that they need to maintain a clean house and surrounding to avoid mosquitoes, rats, cockroaches and other pests/insects that are often the transmitters of various infectious diseases?

The statement that government should step up spending for healthcare in order to address health inequity in society does not appear to be true. When I was still working at the House of Representatives (HOR) from 1991-1999, I noticed that we have three types of healthcare insurance available at the same time. These are:

1. Medical and dental office with a phalanx of full time physicians, nurses and dentists within the HOR There were also free medicines for common illness like flu and cough.

2. HMO cover, it was Intellicare that time, I don't know now. The HMO provided us annual general check up, several tens of thousand pesos of hospitalization cover if we need to be confined.

3. PhilHealth membership. Of course a portion of the contribution is deducted from our monthly salaries but there is also a big counterpart contribution by the employer, the HOR.

So with three types of health insurance cover for all personnel of the HOR -- and I think the Senate, SC, BSP, many other government agencies, government corporations too -- there is huge government spending for its personnel while the average Filipinos, especially those in the informal sector, have none.

In short, government itself is among the propagators of health inequality in society.
----------