“Manila’s Ninoy Aquino International Airport (NAIA) is the worst airport in the world” is a cliché that we often hear and read. But how true is this statement based on quantitative and technical criteria?

I have not seen technical reports on this yet but for this piece, I will make some anecdotal data based on my two foreign trips last week.

First I went to Kuala Lumpur (KL), Malaysia to attend the Economic Freedom Network (EFN) Asia meeting and conference 2017. Then I went to New York City, USA to attend a meeting on intellectual property and trademarks protection partly organized by the Property Rights Alliance (PRA). My think tank, Minimal Government Thinkers, is a member of both EFN Asia and PRA and my plane fare and hotel accommodations were shouldered by several organizations.

Below is a summary of my experience, items #3 to 8. In parenthesis are years the airports have become operational. 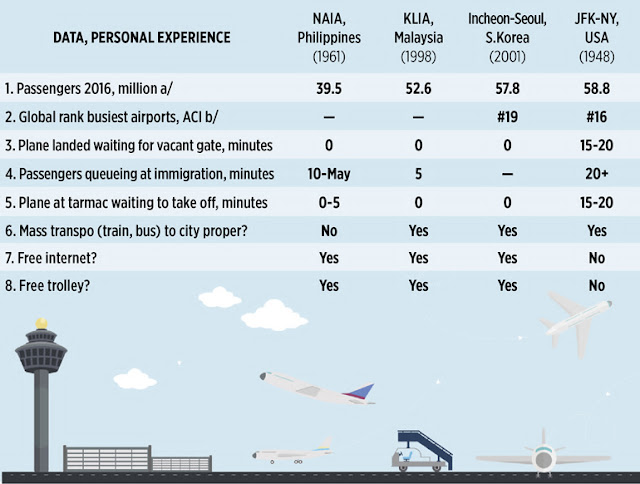 I have almost no complaints about the KLIA. It is big, wide, and modern. Aside from airport taxis, uber and grab cars, passengers can take the express or high-speed train to KL Sentral station in the city center (fare about 35 ringgit, 30 minutes) then take the cab or MRT/subway from there. I took the airport coach, which charged only 10 ringgit, and the travel time was about 60 minutes. I then took the MRT/subway, with a fare only 2.70 ringgit to Ampang Park, which is near the hotel venue of EFN meeting.

I have several complaints about the JFK-NY airport, mainly on the various delays as summarized in the table above. In addition, there is road congestion at the JFK airport’s passengers pick up area. Lots of waiting cars, frequent double parking, and no airport personnel at that time to restrain motorists from blocking the road. I saw these around 10 pm while waiting for the airport bus.

There was no free internet at JFK arrival area. At the departure area, there is one but it is hijacked by boingo, charging about $5 an hour. Boingo has “free 30 minutes” internet but one must watch the sponsors’ ads, and it is very slow. In short, I was not able to check the web there.

But one advantage of JFK is its connection to cheap mass transportation systems.

On my arrival, I took the airport bus to Manhattan, Port Authority terminal at 42nd street, paid $18 for the more than one hour trip. I then paid $2.75 and took the subway to my destination. When I left, I took the subway from uptown to JFK airport then skytrain, which cost me only $7.75. A taxi from uptown to the airport would cost about $70-75 including toll fees and tip to the driver.

I am not a frequent traveler, I take an average of only three foreign trips per year (all sponsored) mostly in Asia, and so my perspective will be limited compared to other people who make more than ten trips a year. Nonetheless, these are some things that the government and NAIA management may consider.

One, finalize the alternative airport to NAIA and start the work soon via integrated PPP, not hybrid PPP. While there is overall recognition of this need due to existing and future congestions, there is continued delay in the final decision as to where that airport shall be – at Sangley Point in Cavite, or Bulacan or Clark-Pampanga, or somewhere else.

Two, keep the freebies like free internet, have free drinking water fountains (currently there is none), keep the immigration entry/exit fast. And avoid scandals like “laglag bala” (of the past administration) and robbery/extortion of rich passengers. Just kick out and file charges against airport or immigration personnel involved in those scandals.

Three, expand the airport bus in all four terminals to more destinations other than Pasay-Makati. With heavy daily traffic in Metro Manila, passengers from far away cities like QC, Navotas, or Antipolo, should avoid being driven to or from NAIA.

Government should allow and encourage the energy, financial resources, and technical expertise of the private sector in finding various solutions to airport and road congestion.
--------------