The world is mostly run on fossil fuels (81.4%). Nuclear makes up 5% with 13.6% from renewables. Solar panels and wind turbines contribute less than 0.7%.

When you hear 13.6% renewables, you will likely think 'wow, things are going pretty well with the change-over to renewables'. But these are not the ones you hear about. The biggest contributor is wood, used in the poor world to cook and keep warm. This leads to terrible indoor air pollution – it is actually the world's deadliest environmental problem, killing some 4.3 million people each year. We should definitely hope the poor will have to use *less* polluting wood in the future. 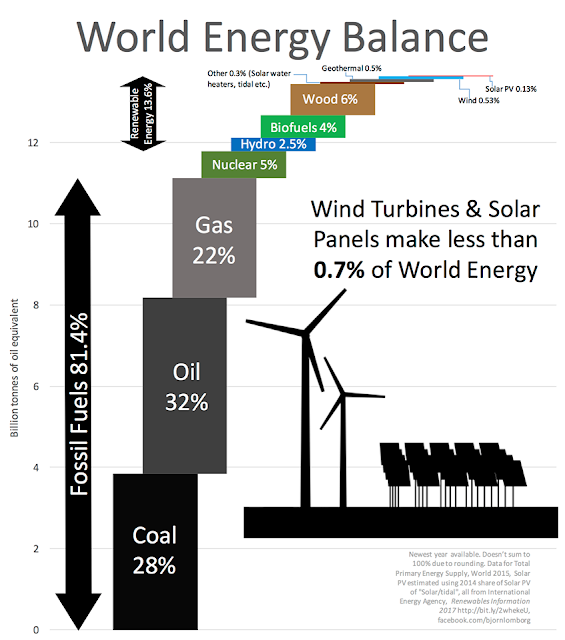 The other main contributors of renewables are biofuels (e.g. the American forests, cut down and shipped across the Atlantic to be burnt in European power plants to be called green and CO₂ neutral) and hydropower. In total, that makes up 12.1%. The last 1.5% comes mostly from geothermal energy (0.54%) and wind turbines (0.53%) along with solar heaters in China, tidal power etc. (0.29%) and solar panels (0.13%).

Contrary to the weight of news stories on how solar and wind is taking over the world, solar panels and wind turbines really make up a very small part of the global energy mix. (I started out coloring solar panels yellow, but the thin sliver at the top became invisible.)

Sources: The International Energy Agency has released their latest Renewable Energy Information 2017, http://www.oecd-ilibrary.org/.../renewables-information.... It contains 488 pages of data, with preliminary data for the rich world for 2016, but for the entire world for 2015. Unfortunately, the data is not free.

Since solar PV constitutes such a small part of the energy supply, the International Energy Agency combines it with tidal, solar CSP and solar thermal (the water heaters on rooftops for direct hot water). In 2014, the split was 34% for solar PV, 0% for tidal, 6% for CSP and 60% for thermal, so I applied the same split to the data for 2015.


All data is Total Primary Energy Supply, which is the International Energy Agency's own main measure, also used in all their graphs for global energy balances.
---------------