When the White House proposed a drastic corporate income tax cut (from 39% to 20%), 25% for single proprietorship, they did not suggest a tax hike somewhere to "compensate for lost revenues" like the Dutertenomics' tax-tax-tax.

Copy-pasting portions of these press releases and short blog posts from the WH. 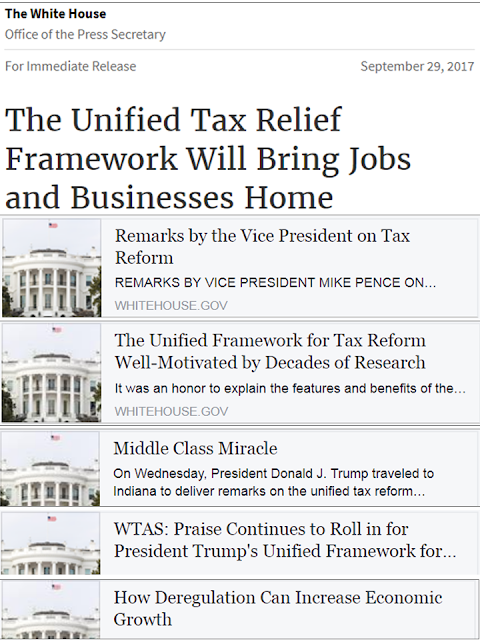 * The U.S. average corporate tax rate is almost 10 points higher than China’s, according to the Congressional Budget Office." -- Sept. 29, 2017.
https://www.whitehouse.gov/the-press-office/2017/09/29/unified-tax-relief-framework-will-bring-jobs-and-businesses-home

"Our plan is based on four simple principles: reducing taxes for working families, simplifying the tax code, cutting taxes for businesses large and small, and making it possible for American companies to bring profits home to America to create jobs and opportunities here."
-- VP Mike Pence, Oct 03, 2017.
https://www.whitehouse.gov/the-press-office/2017/10/04/remarks-vice-president-tax-reform

There is now a broad consensus in this country that it is time to “Tear down this rate.”
-- Kevin Hassett, Chairman of the Council of Economic Advisers.
https://www.whitehouse.gov/blog/2017/10/05/unified-framework-tax-reform-well-motivated-research

"The America First Tax Plan will bring historic tax relief to the American people through a framework that is “based on four key ideas,” said the President. First, the plan will cut taxes for every day, hardworking Americans, taking the burden off the middle class. Second, the tax code will be dramatically simplified, allowing Americans to file their tax returns on a single sheet of paper. Third, the business tax rate will be lowered to 20 percent, making business in America competitive again. And finally, the “American Model” will encourage businesses to return from overseas, bringing trillions of dollars to the economy." -- Sept. 28, 2017.
https://www.whitehouse.gov/.../10/03/middle-class-miracle

"* In 2000, completing paperwork for Federal regulation cost an estimated $236 billion (up from $143 billion in 1980). Assuming the same proportion of compliance officers’ salaries out of total paperwork cost, the cost of paperwork increased to $881 billion in 2015.

* Regulation is especially burdensome for small businesses: the cost per employee of complying with regulations was higher for small firms ($11,724) than it was for firms with over 100 employees ($9,083)...

* There were approximately 45,000 more pages in the Federal Register, which reflects the flow of new regulations, than 40 years prior." -- October 02, 2017. https://www.whitehouse.gov/blog/2017/10/02/how-deregulation-can-increase-economic-growth

I wonder why many "libertarians" and free marketers would be silent or even implicitly attack this tax cut plan by Mr. Trump as "favoring the rich" or "favoring Trump businesses". Perhaps the quick answer is that many libertarian-anarchists argue that "taxation is theft" and hence, the tax rate should not be 39%, not 20%, not even 1%, but zero. Zero taxes, zero government as we know it.

Fine, if one is talking to students or fellow anarchists. But if one is involved in public policy debates, engaging government officials, legislators, etc. is necessary and inevitable. It is not possible to advocate "zero government" while engaging government for lesser regulations, lower and fewer taxes, lower non-tariff barriers in trade, and so on.