IPR and Innovation 38, Recent IP developments in some ASEAN countries

Property rights protection of both physical and non-physical/intellectual -- trademark/logo, copyright, patent, etc. -- is among the cornerstones of dynamic, mature and market-friendly economies. Individuals and enterprises develop new products and services via innovation and they create new value, new wealth for society.

I am reposting some developments on IPR in the ASEAN. Thanks to the Property Rights Alliance (PRA) for the bi-weekly IP updates.
---------------

"We are a key mechanism in protecting new technology and innovation vital to economic development, and we do this by motivating new developments," said Thosapone Dansuputra, director-general of the department.

Thailand to accede to the Madrid Protocol 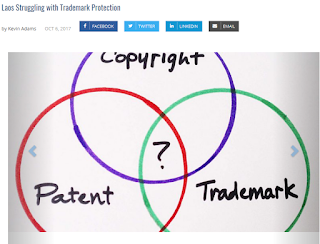 The number of trademark registrations is lagging in Laos as many businesses lack understanding of their rights and fail to register to protect their intellectual property, according to the Intellectual Property (IP) Department under Ministry of Science and Technology on Monday.

Laos Struggling with Trademark Protection
According to a study by the Intellectual Property (IP) Department of the Ministry of Science and Technology, only about 40,500 trademark applications have been filed in the Southeast Asian country since 1991. This is a relatively low number of applications for trademark protections for a country of 7 million and an economy with a GDP of $37.3 billion.