* This is my article in BusinessWorld today.

Among the biggest alibis given by Dutertenomics as to why we need new or higher taxes is the fact that the government needs more money to bankroll “build-build-build” hybrid PPP (public private partnerships) plans. Then warnings were issued by both government and its nongovernment allies that “no new taxes, no build-build-build.” For me, this is blackmail and should not easily be accepted by the public. Here are my three reasons.

One, there have been many past PPP projects in operation and current PPP projects under construction that did not necessitate large-scale new taxes or tax hikes (see table). 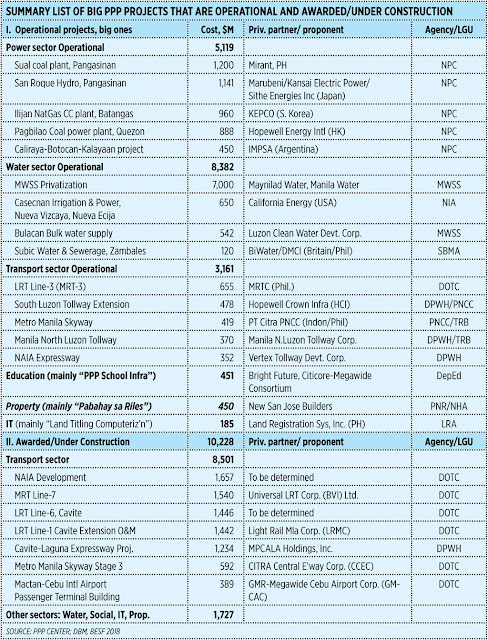 Two, an integrated PPP (construction then operation and maintenance (O&M) under one private entity or consortium) will accomplish the task at little financial exposure and burden for the government and taxpayers. And there would be no or little need for many of these taxes. But Dutertenomics is inclined to favor hybrid PPP (construction is government via foreign loans/ODA and/or annual budget/GAA, O&M is private) for some unholy reasons like implicitly favoring China loans, China contractors, and banks. Or using administration cronies as contractors in exchange for big favors.

Compare the motive of an administration with only six years in office (only 4+ years in the case of the current regime) vs. big local companies which have been around for the past 30, 50, or 100+ years and intend to be here for the next 50, 100+ years. The former has the tendency to amass wealth quick and worry about political scandals later. The latter would try to avoid political and business scandals as they have corporate brands to protect and will bank on those brands for many decades to come here and abroad.

Three, more integrated PPP portfolio for big local firms and consortia means wider experience and more confidence in the field, bigger business opportunities to join PPP projects in our neighbors in the ASEAN and beyond. Philippine-based construction and infrastructure consortia will soon become big multinationals and players in the region and the world.

Reducing the country’s personal income tax (PIT) rate should be a social goal and a public service in itself. Earning P500,000 (little less than $10,000) or higher per year and be slapped with 32% income tax is very confiscatory and immediately qualifies the government as creator of poverty. This has been going on for many years now and should be changed asap — without raising or creating new taxes somewhere.

Nonetheless, Dutertenomics’ TRAIN will be passed very soon because (1) Congress and Malacañang act like one-party state with no serious significant opposition or fiscalizer, and (2) dishonesty and even some blackmail were effectively used to make the public accept tax hikes. In short, coercion and deception were put to use.

After the current package of TRAIN, there will be TRAIN 2 to be introduced next year. The current administration will have been emboldened enough to create new taxes or raise existing ones anytime it wants to because Congress coercion and public deception are going well.

A government that intervenes the least, that taxes the least, is conducive to more growth, more job creation, more production of goods and services, and less inflation, less state dependence. We will hardly see that under the current administration.
---------------