Mining 55, Kaleidoscope forum by UP MINERS

Last Thursday evening, September 28, the student organization UP MINERS held a forum on "Kaleidoscope: Various Perspectives on Mining" held at the UP College of Engineering Theater. Just panel discussions, no powerpoints. There were six of us panelists -- two from the DENR Mines and Geosciences Bureau (MGB), Atty. Josephine Sescon and another officer; Atty. Ronnie Recidoro of the Chamber of Mines (COMP), Engr. Duday de Sales of Woodfield Consultants, Jaybee Garganera of Alyansa Tigil Mina (ATM) and me. 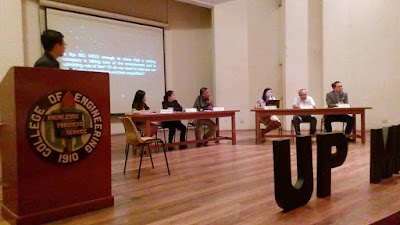 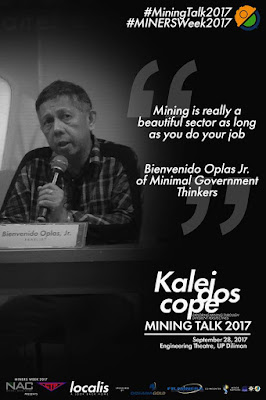 Mining is beautiful in the sense that it can create a lot of jobs, lots of community projects for many decades in a relatively small area via deep open pit mines. Instead of quarrying and digging over a wide area of tens or hundreds of thousands of hectares, one open pit will need only several hundred hectares and machines and trucks can dig there for many decades. Similar to a high rise condo, instead of needing dozens of hectares to house 500 households, one will need only half hectare to build housing for 500 households in 1 or 2 condo towers.

I like the Australian case. Mining occupies only 0.02% of total land area but the sector contributes 9% of GDP. Compare with the PH exporting millions of OFWs who contribute 10% of GDP annually. No "small scale" mining in Australia, the sector is heavily mechanized, monster machines and engines at work, giving jobs to tens or hundreds of thousands of people.

Among the points I discussed were the following:

1. Mining share of 0.65% of GDP is indeed small if compared with nationwide average, what Dr. Caloy Arcilla says as "the tyranny of national averaging". But if compared with a provincial or regional GDP, mining share for certain provinces like Surigao can be as high as 25%.

People who argue that "it's only 0.65% of GDP, we can close mining totally" should also consider a similar argument that "poultry, piggery is perhaps only 1% of GDP, very small they can be closed totally."


2. Raising the excise mining tax from 2% to 10%, sure but there should be corresponding reduction if not abolition of other taxes, royalties, fees and charges.

3. Do mining communities and municipalities benefit from the industry or they are only taken for a ride? No in many areas like what I saw in Rio Tuba and Bataraza, Palawan. Yes in some municipalities perhaps. In a presentation by Dr. Cuano during Mining PH 2017 conference at Sofitel last Sept. 8 or 9, he showed that a small town Claver in Surigao has a per capita resources (IRA from national govt, mining share, etc.) of about P13,000+. Quezon City has a per capita resources of only P5,700+, 2015 figures. Or a mining town has per capita income more than 2x than a rich, big, LGU in Metro Manila.


4. The Tampakan gold-copper project in Mindanao, the single biggest FDI in the PH at $6 B. Granted permit, cancelled, repermitted, cancelled. Government has created great investment uncertainty in this project alone. That is not how governments should manage an economy. 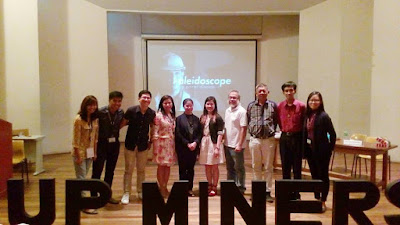 5. Mineral-rich lands are almost useless for agriculture, useless for forestry, useless for animal farming, even for settlements of indigenous people (IPs). Why -- I explained my experience in agro-forest farming in the farm in Pangasinan. Land that is silica- and other mineral rich, we planted mahogany, acacia auri, eucalyptus, etc. After 10 years, they either die or are very thin, very short, stunted growth. Even cogons don't grow well. Just 100 meters away, the soil is soft, same trees planted a decade ago, they are tall and big.

Good summary by Ralph Abainza later. Above photo with UP Miners officers, panelists, moderator. Thanks for the opportunity to share insights with you guys.

Posted by Bienvenido Oplas Jr at 10:07 AM