I have heard about Sir John Cowperthwaite for the first time about 2004 or 2005, from my friends at the Lion Rock Institute in Hong Kong and I was impressed of him. Prior to that, I thought that it was deliberate on the part of the British government to institute a free market colonial economy in HK after WW2. No, it was not the case. The man as Britain-appointed Administrator of HK simply has a firm conviction of positive non-interference by government in encouraging individual and enterprise innovation and entrepreneurship. 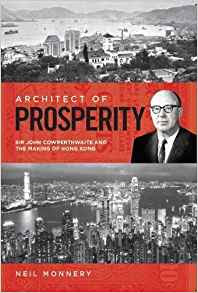 A book was recently published about the man and here are two of many book reviews.
----------

Sir John Cowperthwaite is that most unlikely of things: a bureaucrat hero to libertarians

DURING the 1960s, governments were responding to political unrest and economic challenges with nationalisation, centralised planning and public spending (financed by heavy taxes and debt). There was intense pressure for Sir John Cowperthwaite, the financial secretary of Hong Kong, to join the crowd.

Civil servants in Whitehall had been urging their counterparts in Hong Kong to introduce high taxes for some time. Locals demanded spending to address a lack of housing for crowds of poor immigrants fleeing the horrors of post-revolutionary China, and a territory-wide shortage of drinkable water. Meanwhile, the territory’s export-driven economy was threatened by rising global tariffs, prompting demands for public incentives to reorient production towards the domestic market.

A new biography of Cowperthwaite by Neil Monnery, a former management consultant, tells of a man who replied to these demands with a qualified “no”, and in the process became that most unusual of things: a bureaucrat hero to libertarians. His approach would subsequently be labelled “positive non-interventionism”, meaning governance stopping just short of laissez-faire. Public housing would be funded, but only for tiny flats; reservoirs would be built, but users would be charged. Much of the rest was left to individuals and businesses to sort out, unfettered by government directives. “Money,” Cowperthwaite said, should be left “to fructify in the pockets of taxpayers”.

Cowperthwaite’s ability to resist bigger government was born in a lost era. He was educated in classics and economics at a time when the insights of Adam Smith prevailed. That gave him the foundation to debate with free-spending colleagues influenced by John Maynard Keynes.

In 1945, he arrived in a Hong Kong in ruins from a brutal Japanese occupation. A combined military-colonial administration engaged heavily in economic management, and Cowperthwaite’s early jobs included managing the trade in food and raw materials and administering price controls, roles that defined a heavy government hand. But he knew that the territory’s lack of natural resources meant that post-crisis prosperity depended on its ability to attract entrepreneurs and capital.

That meant government’s role was to provide freedom rather than help. Requests by industry for subsidies were routinely rejected. So too was deficit government financing, which could merely push costs to a future generation and make the territory vulnerable to financial upheaval. Some of his ideas were radical: to ensure that temporary fluctuations in business conditions were not used to justify government controls, he banned the collection of macroeconomic statistics....

When Cowperthwaite stood down in 1971 his tenure was reckoned a huge success, but that provided only limited protection for his policies. The embargo on data collection was reversed by his successor. Subsequent administrations, both British and Chinese, whittled away the restraints on government intervention.


One persistent objection to limited government particularly rankled Cowperthwaite—that it was callous. He was convinced that “the rapid growth of the economy…produces a rapid and substantial redistribution of income [and] makes it possible to assist more generously those who are not, from misfortune temporary or permanent, sharing in the general advance. The history [of Hong Kong] demonstrates this conclusively.” As that history becomes increasingly remote, a biography of a key architect becomes ever more valuable. There are few other examples.
-------------

Another review is from the Adam Smith Institute.

ARCHITECT OF PROSPERITY
By Eamonn Butler

… the small cadre of civil servants, like Sir John, whose job it was to run Hong Kong, fixed on the objective of making it economically prosperous, and knew that the best way to do that was to do exactly the opposite of what the home country was doing—with its nationalisations, controls, economic planning, high taxes, trade barriers, deficit spending, and all the rest. The Hong Kong administrators by contrast rejected the idea of government planning and spending to invest, believing that entrepreneurs knew how and where to invest, and how to manage their businesses, better than any government officials. They kept the government’s books balanced for nearly every year; they resisted high taxes, believing that low taxes would encourage private investment and would expand the long-term tax base.

Cowperthwaite was the most important person behind these policies, as a new book by Neil Monnery, Architect of Prosperity, demonstrates. He ran the trade and industry department after the war then became financial secretary in Hong Kong—effectively the colony’s Chancellor—until he retired in 1971.

One thing the book demonstrates is just how hard it is for any government body to prevent itself from interfering in an economy—with the inevitably counterproductive results. Sir John, it shows, fought off many such attempts. There is a story that the British government, then pursuing a full interventionist policy, sent a group of civil servants over to Hong Kong to ask Sir John why he was not keeping unemployment statistics, and to make him do just that. Sir John, goes the story, put them on the next plane back home, explaining that entrepreneurs know the precise state of the labour market from day to day, never mind quarter to quarter, and that if he kept unemployment statistics, people would want him to produce some counterproductive intervention to boost unemployment.

The story is not true, but it is not far from the truth. Cowperthwaite had to fight over and over to resist ‘enlightened’ interference with the Hong Kong people’s lives and businesses, and to maintain his doughty view that economic statistics were a double-edged sword and you should only collect the ones that are really essential….
-------------