BWorld 159, Electoral reforms and the President

* This is my article in BusinessWorld last Monday. 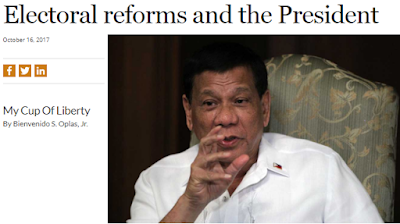 President Rodrigo Duterte has been on a rampage recently, repeating his warnings about declaring a “revolutionary government,” as if he has the authority to issue laws and orders without consideration or fear of opposition from independent-minded legislators.

Among his previous rants include his order to his loyal leaders in Congress to (a) impeach the Commission on Elections (Comelec) Chairman Andres D. Bautista, (b) impeach Chief Justice Maria Lourdes P. A. Sereno, (c) impeach Ombudsman Conchita Carpio-Morales, and (d) create new rules in electoral exercises such as postponing and resetting the barangay elections.

Speaking of electoral reforms, some things are better retained and while others should be changed. Among these are the following.

1. Retain automation and do not entertain the proposal by certain sectors to go back to manual counting of the votes. The number of voters in the country is rising and machines should take care of the counting and processing of results (see table). 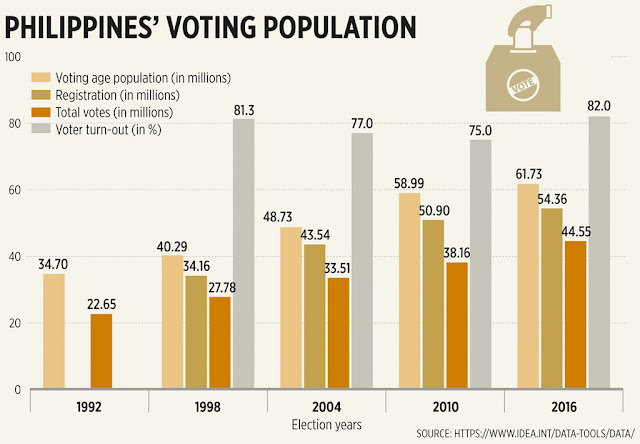 The lobbying of the son of a former dictator, Ferdinand “Bongbong” R. Marcos, Jr., to discredit the results of the 2016 national elections and canvassing for vice-president has been rejected by the Supreme Court — good riddance. It was a dangerous attempt by Mr. Marcos to unseat the elected VP so that he can be the second highest official in the country, a position that is just heartbeat away from the Presidency, a position held by his father for 20 years (1965-1985) via deception and large-scale military coercion.

2. Elections of barangay officials should be as scheduled and not subject to postponement by the President or Congress.

Elections should held at regular and predictable intervals to give space and opportunity for the people to directly demand accountability from their elected leaders. Existing laws mandate fixed terms of office for elected national and local leaders.

3. No to state subsidy to political parties as proposed by certain sectors. This is a wasteful use of taxpayers money. Politicians and political parties have resources of their own or have access to a network that allows them to solicit big donations from their friends and supporters. Keep the tax money for direct subsidy to the poor, or cut taxes instead so that people can enjoy the fruits of their labor.

Meanwhile, if the proposed charter change (cha-cha) should materialize, the following reforms should be considered.

In practice, many non-poor individuals and groups have entered the legislature through the backdoor afforded by the party-list system.

5. Abolish the Sangguniang Kabataan (SK). Young people should not be encouraged to enter the world of politics early because government, by nature, is force and coercion. Young people should focus instead on voluntary and civil society action and learn the arts of entrepreneurship early.

6. Elect only the political party, not candidates, should the Philippines become parliamentary. Once put in effect, parties will stay focused on their political ideologies and advocacy and not on personalities.

Many candidates can be accommodated by the two parties and they will all go through primaries and knock themselves out until only one will represent the respective party. This could have prevented a Duterte win because many candidates in the 2016 elections talked about respecting the rule of law while Duterte repeatedly argued for breaking the law and short cut the process of winning the drugs war.

8. Or retain the multi-party system but have a round two elections where only the top two candidates will contest and “knock out” the other candidate in an open electoral system.

Again, this could have prevented a Duterte win because supporters of the 3rd, 4th and 5th placers can rethink their position and choose only either the 1st or 2nd placer. This will avoid having a “minority President.”
---------------