Three news reports published by BusinessWorld during the past few days indicated that the energy sector in the Philippines and its several neighbors is becoming more efficient, market-oriented, and less bureaucratic. These news articles were (1) “ERC declines to intervene in 4 Meralco power deals” (Sept. 20), “DoE says no plans to extend FiT for biomass, river projects” (Sept. 26), and “Malaysia, Thailand, Laos to sign energy-trading deal” (Sept. 26).

The first article says that the Energy Regulatory Commission (ERC) is upholding its own rule to stop intervention after a deadline for petition against any power supply agreement (PSA) has been met.

The second one says that the Department of Energy (DoE) will not extend the feed in tariff (FiT) or guaranteed high price for renewables for 20 years, for undersubscribed biomass and run of river hydro power. This move will protect electricity consumers from further high electricity prices.

The third story says that electricity trading in the three countries mentioned will mean greater power stability and more price competition among power producers. This is like expanding our Wholesale Electricity Spot Market (WESM) from national to regional trading.

To add to this list of positive news, it has also been reported that power transmission and distribution in the region have become more efficient, cutting down on system losses.

Within a decade, the Philippines, for instance, has managed to chop system losses from 12.9% to 9.4% of electricity output, an efficiency gain of 3.5% (See table). 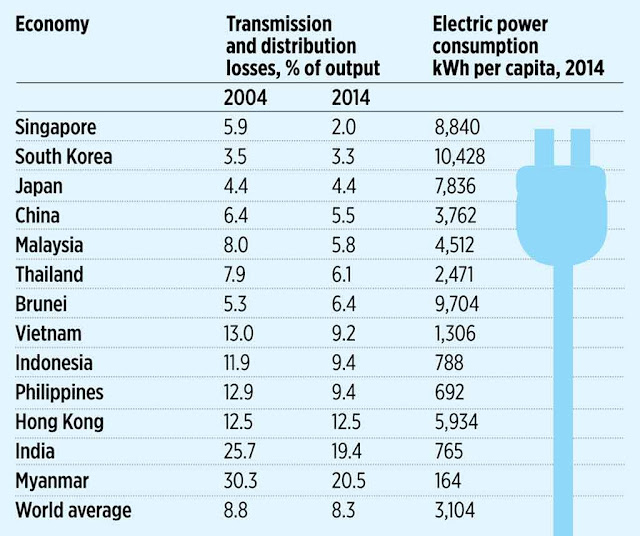 And this implies that the technology and administrative processes to bring down system losses are generally correlated with the wealth and industrialization of an economy.

There are several attempts both in Congress and the ERC to significantly reduce the distribution system loss by distribution utilities (DUs).

The ERC Draft Rules intend to make high consideration if not outright favoritism of many electric cooperatives (ECs) by giving them (a) high technical loss (mainly conductor loss and no load loss) cap of 5.5-7.0%, (b) high cap on nontechnical loss (illegal connection, direct theft, meter error, billing irregularity) of 4.5%, total of 10-12.5% distribution system loss that can be passed to consumers. In contrast, (c) private DUs will be forced to have a low technical loss cap of only 2.75%, and low nontechnical loss cap of only 1.25% or total of only 4% distribution system loss by private DUs.

This is not a good plan for the following reasons.

Two, it does not pressure or discipline the ECs and force them to become more efficient in cutting their system losses. As a result, it is not possible to bring down the system loss to the levels of Thailand, Malaysia, China, Japan, Singapore if this attitude and policy is further adopted.

Three, it does not push many inefficient ECs to be corporatized, to behave like many private corporations that are forced by SEC regulations to be more transparent.

Four, it remains silent on transmission system loss of the sole grid operator, the National Grid Corp. of the Philippines (NGCP).

Government through the ERC should create rules that apply to all players — ECs in the provinces and private DUs in big urban centers — no exceptions or favoritism, and give consumers further reduction in overall electricity prices.