BWorld 158, Why a carbon tax is wrong 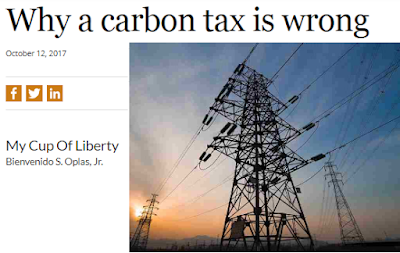 Coal power produced nearly 48% of Philippines’ actual electricity generation in 2016 despite having only 34.6% share in the country’s installed power capacity of 21,400 MW or 21.4 GW, Department of Energy (DoE) figures show.

At a forum organized by the Energy Policy Development Program (EPDP) at the UP School of Economics last Oct. 5, the speaker Dr. Francisco Viray, former DoE secretary and now president and CEO of PhinMa Energy Corp., showed in his presentation a screen shot of Dr. Ciel Habito’s article, “Let’s get the carbon tax right.” Ciel was arguing among others, that the carbon tax for coal power should be raised from the current P10/ton to P600/ton and not P20/ton as contained in Senate bill No. 1592 of Sen. Angara.

I commented during the open forum that Ciel’s article in reality has a wrong title, it should have been “A carbon tax is wrong.” And here are the reasons why.

One, as mentioned above, coal power was responsible for nearly 48% of total electricity generation nationwide in 2016 and it is wrong to restrict its supply and/or make its price become more expensive. Kill coal or even drastic cut in coal power would mean massive, large-scale, and nationwide blackouts for several hours a day, something that consumers wouldn’t want to endure. After all, even a one minute brownout can already cause widespread disappointment.

Two, the Philippines’ overall coal consumption – in absolute amount and in per capita level – is small compared to the consumption of its neighbors in Asia (see table). 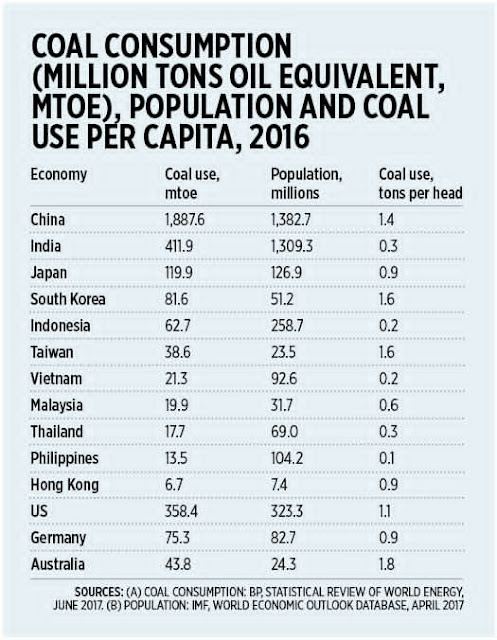 The Philippines has only 100 kilos or 0.1 ton per head per year of coal, the smallest in the region. There is no basis to suggest restricting further coal use given the fast demand for electricity nationwide.

Three, it is wrong to advocate more expensive electricity via high carbon tax given that subsidies to renewables via feed-in-tariff (FiT), among others, are already adding upward price pressure. A higher carbon tax may be more acceptable to the consumers if the FiT scheme is discontinued and ultimately abolished. If this is not done, better to keep coal excise tax as low as possible.

The proposed P600/ton excise tax on coal power would translate to P0.24/kWh hike in power generation charge. Using Ciel’s numbers, one ton of coal can generate 2,519 kWh electricity on average. So P600/2,519 kWh = P0.24/kWh. That is equivalent to FiT-Allowance that each electricity consumer from Luzon to Mindanao must pay monthly for many years to come.

Four, it is wrong to demonize and over-regulate carbon dioxide (CO2) as a pollutant because it is not. CO2 is invisible, colorless, and odorless unlike those dark smoke coming from vehicles and chimneys of old manufacturing plants.

CO2 is the gas that humans and animals exhale, the gas that flowers, trees, rice and other crops use to produce their own food via photosynthesis. More CO2 means more plant growth, faster greening of the planet. CO2 therefore is a useful gas, not a pollutant gas that the UN, Al Gore, and other groups and individuals would portray it.

While the hike in coal excise tax from P10 to P20/ton as contained in the Senate version is somehow acceptable, there is danger that the P600/ton proposal will spring out of nowhere during the bicameral meeting of the House and Senate leaders. This should not be allowed to happen.

Energy irrationality can kill more people today, not 40 or 100 years from now. The irrationality and insensitivity of rising government taxes should be restricted and limited.
--------------