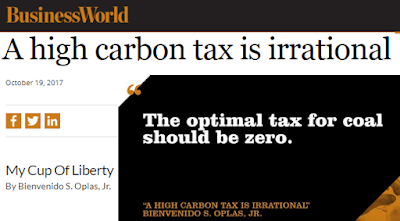 Political science masquerading as climate science insist that the gas that we humans and our animals exhale, the gas that is used by trees, flowers, fruits and other crops to grow and feed the world — carbon dioxide or CO2 — is a pollutant that must be over-taxed and over-regulated.

Far from the truth. CO2 is a useful gas, not a pollutant.

Since it is useful, the optimal carbon tax for coal in particular is not P10/ton, not P20, not P600, but zero. However, a zero tax on coal is unpopular from the world of climate alarmism, so we classify these tax rates as follows: P0 tax is optimal, P10/ton is rational, P20/ton is compromise, P600 is irrational.

Recently, eminent economist Dr. Ciel Habito made a follow-up paper, “The case for the carbon tax” and insist that the carbon tax for coal should be raised from the current P10/ton to P600/ton.

To support his claim, he used some ridiculous numbers that are peddled by the watermelon (green outside, red inside) movement. Here are two:

Wrong. CO2 is 400 ppm or only 0.04% of all greenhouse gases (GHGs). About 95% of GHGs is water vapor — the clouds, evaporation from the seas, oceans, lakes, rivers, stomata of leaves, etc. The remaining 4%+ are methane, nitrous oxide, others.

This is perhaps 5% geological science and 95% politics.

The Minoan, Roman, and Medieval Warm Periods (when there were no SUVs, no coal plants, no airplanes) were much warmer than the Modern Warm Period (mid-1800s to roughly 2000). There were wild swings in global warming and global cooling cycles regardless of the CO2 level. How would one call this — “much less frequent extreme weather events than today?” Garbage.

BACK TO COAL POWER.
From the recent energy and economic experience of our neighbors in Asia and some industrial countries in the world, the hard lessons are these: (a) Countries that have coal consumption of at least 2.1x expansion over the past two decades are also those that experienced fast GDP growth of at least 3x expansion. 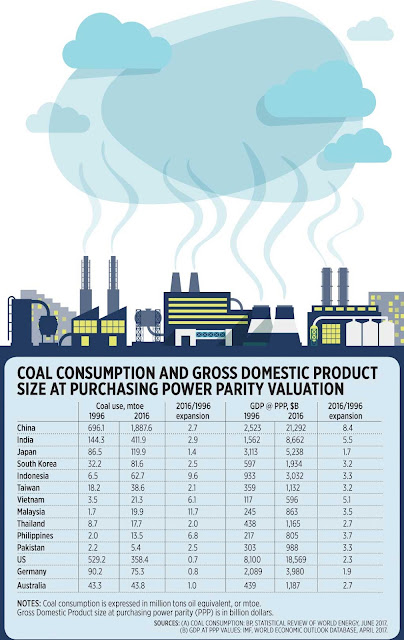 A high carbon tax is irrationalI have repeatedly argued that CO2 is a useful gas. For those who insist that CO2 is a pollutant, they can certainly help curb further CO2 emission even without legislation and carbon taxation through the following:

• Stop using their cars, not even jeepneys or buses, they emit CO2; skateboards and bicycles only.

• Stop connecting from the grid and from Meralco because 48% of nationwide electricity generation comes from coal; no gensets either. Use only solar-wind-biomass + candles at home.

• Tell their friends, business associates, family members, to do the same so that there will be more people emitting less CO2.

The Habito proposal of more expensive electricity via P600/ton carbon tax on coal is dangerous because while the Senate version of TRAIN adopts a P20/ton excise tax, the P600 can spring up somewhere during the final and Bicameral Committee meeting. The proposal should be exposed as based on political science, not geological or climate science.
-------------