While some 8,000 to 14,000 suspected drug users and small-time drug pushers have been murdered  over the on-going drugs war of the Duterte government, there was not a single "big fish" drug lord and drug pusher who has been arrested. Well, two municipal Mayors and their friends, family members have been massacred over the past few months, suspected of being drug pushers in their areas. But they are not considered as "big fish" enough.

The P6.4 billion worth of shabu that went through the Bureau of Customs (BOC) and was later raided at a warehouse in Valenzuela, not a single big personalities implicated in the Senate investigations was arrested or prosecuted. Then this news report from the Inquirer on August 09, 2017, Shabu shipments to Valenzuela warehouse began in June 2016, says caretaker.

IN TIME FOR NEW MANAGEMENT
September 26

Shipments were made in June 2016, January 2017, March 2017, and May 2017 (intercepted). Not a moment wasted. The first one in time for Davao Group - the political cabal, not its namesake criminal syndicate - taking power in Imperial Manila.


Mr. Duterte won as President in May 2016. The next month, large-scale shipment of shabu started under President Duterte. Cool. 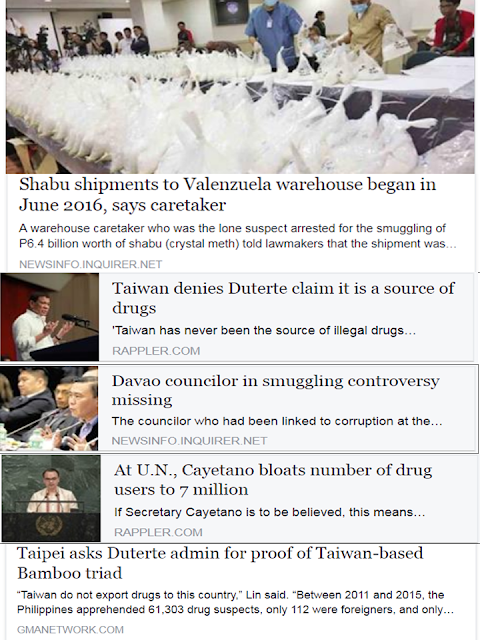 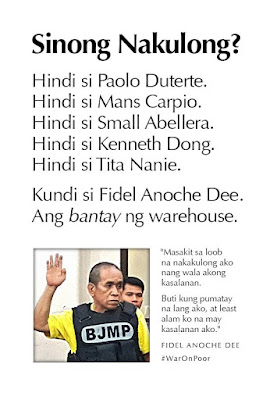 If the President and the DFA Secretary are correct in their numbers, then it means one thing -- the supply of drugs is expanding, the price of drugs is declining due to bigger supply, so the number of users is rising. Good business model.

Who are the 'credible sources' behind these?

B) Marawi terrorism due by drug arrest warrant
AFP says it was triggered by sighting & attempt to arrest Abu Sayyaf chief Hapilon.


PNP cops are suspected of murder in both Kian and Carl cases. They invoke Duterte's standard 'Nanlaban' excuse for the killings.
---------------