BWorld 136, Income tax and the politics of envy

* This is my article in BusinessWorld last Thursday.

“The income tax created more criminals than any other single act of government.”
-- Barry Goldwater (US businessman and five-term senator)

“The difference between death and taxes is death doesn’t get worse every time Congress meets.”
-- Will Rogers (US actor, humorist, columnist)

The tax reform plan of Dutertenomics known as Tax Reform for Acceleration and Inclusion (TRAIN) is composed of (a) overall personal income tax (PIT) cut, (b) hike in excise tax for cars and oil products, (c) hike tax for sugar-sweetened beverages, and (d) hike in number of sectors covered by the value-added tax (VAT).

This paper will focus on the income tax reform: Minimum-wage earners and those earning P250,000/year and below will pay zero income tax. The 13th month pay and other bonuses not exceeding P100,000 are also exempted from income tax. The number of tax brackets has been reduced from seven to six. And the top PIT rate of 32% for taxable income of P500,000/year or higher has been increased to 35% for taxable income of P5 million/year or higher.

To better appreciate the current PIT and proposed changes in the policy in the Philippines, let us compare the rates with our neighbors in the ASEAN. 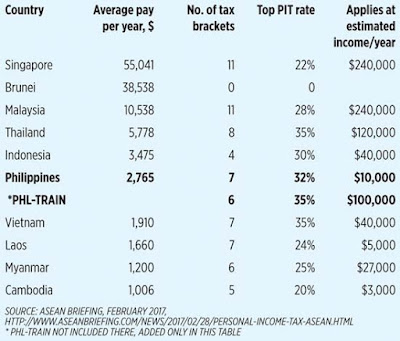 The proposed PHL-TRAIN indeed deserves compliment because current PIT policy is highly confiscatory and makes Barry Goldwater’s statement so accurate. Imagine earning an annual income (net of some deductions) of only $10,000 and the Philippine government automatically confiscates one-third of that.

But what the Department of Finance (DoF) and Congress did is to adopt the “increase tax rates elsewhere to compensate for lower PIT rate” philosophy. This is wrong and there are four reasons why.

First, it is possible to abolish income tax, zero, and yet government will still survive and prosper via other revenue sources. Currently there are 10 countries in the world which have zero income tax policy: Bahamas, Bahrain, Bermuda, Brunei, Cayman Islands, Kuwait, Oman, Qatar, Saudi Arabia, and United Arab Emirates. Their governments rely and thrive on selling petroleum, natural gas, lands, and/or earning from consumption-based taxes and financial transaction taxes.

Second, lower PIT rate can expand the tax base and can potentially increase overall tax revenues. More entrepreneurs and professionals from abroad as well as Filipinos working abroad will be encouraged to do business here to take advantage of lower income tax rate and hence, bigger take home pay.

Stated in a simple equation: Tax revenue (T) is a product of tax rate (t) multiplied by the number of taxpayers (N). Or (T = t x N). A decline in t can encourage the increase in N so that overall T can potentially increase, not decrease.

The DoF and Congress leaders have taken the linear and simplistic argument that lower tax rate means automatic lower revenues. They did not consider potential increase in N and T when income tax rate is significantly reduced.

Currently, Asian economies with low, flat income tax rates are Mongolia with only 10%, Macau with 12%, and Hong Kong with 15%.

And fourth, the politics of envy is wrong. The philosophy of “demonize and overtax the rich, subsidize the poor forever” creates moral hazards problem. The implicit message is: Be careful when you become rich because the government will silently demonize you and explicitly overtax you. Aspire to remain poor, poor forever if possible because (a) your minimum wage income plus bonuses will be tax-free, (b) you get lots of freebies and subsidies, and (c) these are no timetable, forever subsidies and transfers.

When there are plenty of poor people, the government is silently saying two things: “Congratulations” and “Thank you.” Here’s how:

b. “Thank you -- we have more justifications and alibi to harass and confiscate more from the income, wealth, properties and inheritance of the rich and super-rich (especially if they are not friends of the administration).” 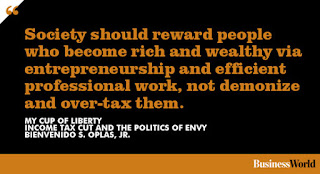