Finally, US President Donald Trump has officially dumped the Paris Agreement of 2015. He declared yesterday,

“We will cease honoring all non-binding agreements”, and “will stop contributing to the green climate fund”.
“The bottom line is that the Paris Accord is very unfair to the United States”.
“This agreement is less about climate and more about other countries getting a financial advantage over the United States”.
“The agreement is a massive redistribution of United States wealth to other countries.”
“Compliance with the terms of the Paris accord… could cost America as much as 2.7 million lost jobs by 2025.”
“India makes its participation contingent on receiving billions and billions of dollars in foreign aid.”
“We need all forms of available American energy or our country will be at grave risk of brown-outs and black-outs.”
“Withdrawing is in economic interest and won’t matter much to the climate.”
“We will be environmentally friendly, but we’re not going to put our businesses out of work… We’re going to grow rapidly.”
“Foreign leaders in Europe, Asia, & across the world should not have more to say w/ respect to the US economy than our own citizens.”
“It is time to exit the Paris Accord and time to pursue a new deal which protects the environment, our companies, our citizens.”
------------
The agreement funds a UN Climate Slush Fund underwritten by American taxpayers
The deal also accomplishes LITTLE for the climate 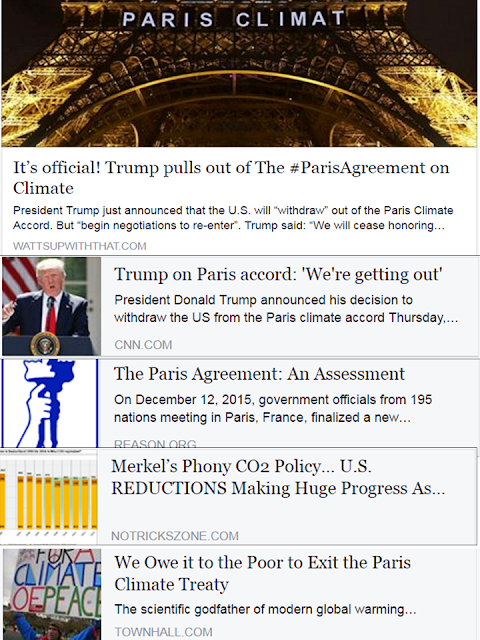 When I checked the US stockmarkets yesterday... Did the investors cheer Trump's decision?


I am actually an agnostic about President Trump's policies in many sectors but when it comes to climate and energy policies, I support him. Planet Earth has experienced climate change many times since it was born some 4.6 billion years ago. How can the UN and governments fight something that naturally occurs? 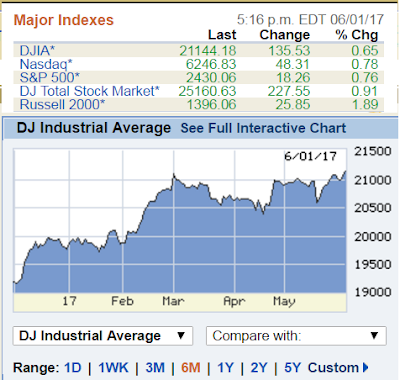 The higher the climate alarmism, the higher the climate extortion becomes. $100 billion/year starting 2020 on top of promised foreign aid to developing. Many governments of developed countries are angry at Trump's decision because they promised a lot, they raised expectations a lot, even if they do not have such big money or cannot squeeze more taxes from their people to give away. They only expected that US taxpayers will shoulder a big portion of such climate extortion.
Now the annual huge parties and junkets involving thousands of "planet saviours" aka annual UNFCCC meetings will be pared down. No more $ hundreds of millions a year of US taxpayers' money to bankroll their huge parties and junkets.

As expected, lefties' and alarmists' heads blew and hysteria, angst and tantrums were flying anywhere. See a short compilation of such hysteria at WUWT,The craziest reactions to Trump pulling out of the #ParisAgreement

When I posted this subject in my fb wall, one alarmist stranger Cesar Cifra unloaded a series of personal attacks. 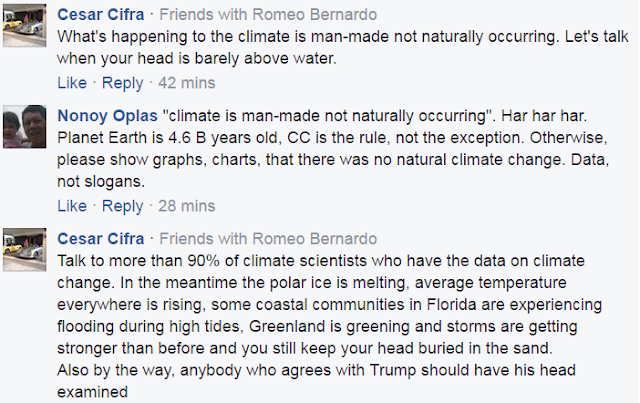 This Cifra is a friend of my friend and fellow UPSE alumni Romy Bernardo. I asked for data (like below, last 4,000 years global temp.) and this Cifra responded with ad hominems, what a lousy and low-life mind. 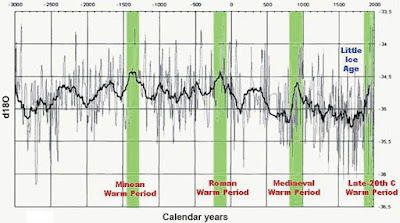 
Anyway, this Trump decision is a big blow to the climate alarmism and global ecological socialism movement. A big blow to the UN and many governments whose revised purpose of existence is to tax-tax-tax their citizens as much as possible to "fight climate change" even if CC has been happening naturally, cyclically, for the past 4.6 B years.
------------
See also:
Climate Tricks 58, Inability to disprove past global warming precedents, December 16, 2016
Climate Tricks 59, Trump's climate advisor to reverse US government alarmism, January 20, 2017
Climate Tricks 60, Alarmism by the socialists and global ecological central planners, January 28, 2017
Posted by Bienvenido Oplas Jr at 1:54 PM