Today is the first of the six-years term of President Rodrigo Duterte. His administration is known for drugs-drugs-drugs preoccupation and the series of deaths and murders by the thousands of suspected drug pushers and users. One year of official "drugs war" (unofficial drugs war and lots of murders from mid-May to June 29, 2016 when he was still a "President Elect"). One year of impunity.

A disturbing article from interaksyon today. 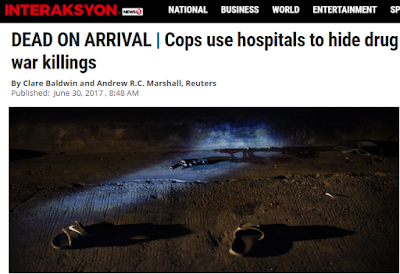 "They were already dead... so why take them to hospital? An analysis of crime data from two of Metro Manila’s five police districts and interviews with doctors, law enforcement officials and victims’ families point to one answer: Police were sending corpses to hospitals to destroy evidence at crime scenes and hide the fact that they were executing drug suspects." 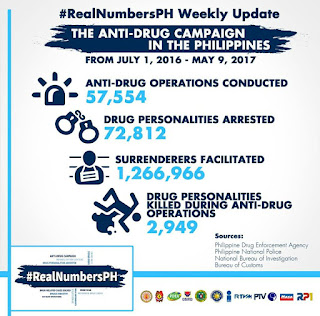 It's a long article with details how police murder victims, often killed pointblank, are still brought to hospital ERs, partly to show that the police "care" for victims of violence.

I think this partly or largely explains why the Mautes, Abus and other organized armed groups have consolidated if not strengthened during the Du30 administration -- the police were busy harassing and killing unarmed suspects so the real criminals, armed and organized, were relatively free to move around.

The AFP should be doing external defense, PNP for internal defense. But since the PNP is busy catching motorcycle drivers with no helmets, killing unarmed drug suspects, the real armed criminals are freer to move around, PNP cannot get them so the AFP is deployed.