Germany moving more to the right is good


Hours before the official start of elections in Germany, this was among the forecasted results. 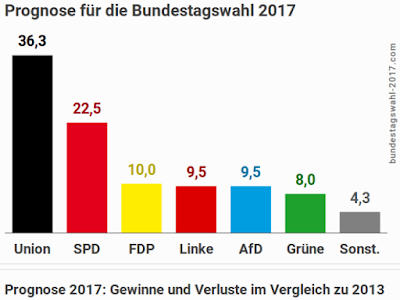 "The big winners are the business-friendly libertarian FDP Free Democrats and the right wing AfD.... The shift to the right means that the brakes are likely going to be put on the Energiewende and on efforts “to rescue the climate”. FDP leader Christian Lindner has been a vocal opponent to onshore wind park approvals in rural areas and forests and has also been critical of the subsidies paid out to green energies... The Greens have said they will accept being a coalition partner only if the CDU agrees to end coal power by 2030, a condition that hopefully the FDP will refuse."
http://notrickszone.com/2017/09/24/germany-shifts-to-the-right-may-mean-significant-slowdown-for-countrys-green-energies/#sthash.nXusXhTS.OkUEKNpC.dpbs 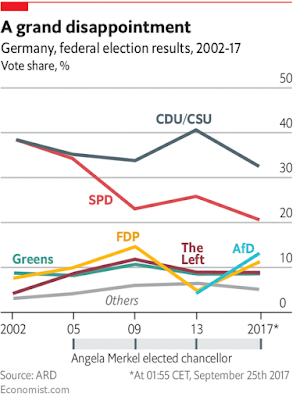 the “Germany for optimists” is the more accurate. The election result is unsettling on several fronts, deeply so where the AfD is concerned. But much of Germany’s pre-election tranquility was illusory anyway. The anger had been building for years; the AfD’s success has just brought it to the surface, where perhaps it can even be understood and addressed. Questions that were going unanswered, tensions that were going unconfronted, now brook no oversight."

FDP and AfD as net gainers, the latter especially (first joined the elections just 4 years ago and got 4.8%, this year got 12.6%). FDP is pro-business, pro-liberalization, pro-energy realism. AfD is wild right and definitely anti-left. Germany is indeed moving right, which is the right thing to do. The lefties -- SPD, Greens, Linke/left -- are transitioning towards becoming marginal parties in the near future.

Thanks to Wolfgang Heinze, FNF PH Country Director for inviting me that night. He's speaking here, introducing FNF and its main advocacies and activities in the Philippines. 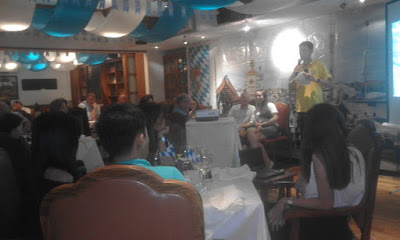 Posted by Bienvenido Oplas Jr at 3:22 AM