* This is my article in BusinessWorld last September 7, 2017.

Last week, the National Transmission Corp. (TransCo), the administrator of feed in tariff (FiT) — which guarantees high prices for 20 years for variable renewable energy (solar, wind, biomass, run of river hydro) filed a petition at the Energy Regulatory Commission (ERC). It sought for an increase in FiT-Allowance to be paid by all electricity consumers nationwide.

FiT-All is one of roughly 12 different charges and taxes in our monthly electricity bill and the one with the fastest increases in recent years: four centavos/kWh in 2015, 12.40 centavos in 2016, 18 centavos this 2017, and 29.32 centavos next year. It is a clear example of renewables’ cronyism that penalizes electricity consumers and rewards renewable energy (RE) developers supposedly to help “save the planet.”

Also last week, I attended the Energy Policy Development Program (EPDP) lecture at UP School of Economics, entitled: “Natural gas: Addressing the energy trilemma and powering our energy needs.” The lecture was delivered by Mr. Giles Puno, President and COO of FirstGen, a big Lopez-owned power company. Mr. Puno covered many topics but I will only focus on the lecture’s three aspects.

One, the lecture mentioned that the cost of wind-solar keeps decreasing so efforts to decarbonize the economy is improving, away from coal power which cannot remain cheap in the long-term.

Two, to address the energy trilemma (energy security, energy equity/affordability, environmental stability), the lecture questioned the 3,500 MW worth of coal supply in the Meralco power supply agreements (PSA). These PSAs were anathema to environmental stability and energy equity since power rate hikes will be expected since coal prices are expected to rise over the long-term. That government should instead prioritize natural gas development.

I mentioned in the open forum that I saw the World Energy Council (WEC) World Energy Trilemma Index 2016 and out of the 125 countries covered, the Philippines was #1 in environmental sustainability, thanks to our big geothermal and hydro, plus recently added variable REs. But Philippines was #92 in energy equity because of our expensive electricity, 3rd highest in Asia next to Japan and Hong Kong.

So it is wrong to demonize coal (nearly 35% of installed capacity but 48% of actual electricity production in 2016) that contributed to declining prices in generation charge in recent years. For instance, the load-weighted average price (LWAP) at the Wholesale Electricity Spot Market (WESM) was declining from about P5.40/kWh in 2012 to only P2.80 in 2016.

Consider also the fact that Philippines’ coal use is small compared to what our neighbors in the region consume. Vietnam consumes twice the amount of what we use, Taiwan three times, Indonesia five times, South Korea and Japan six times — for 2016 alone (see graph). 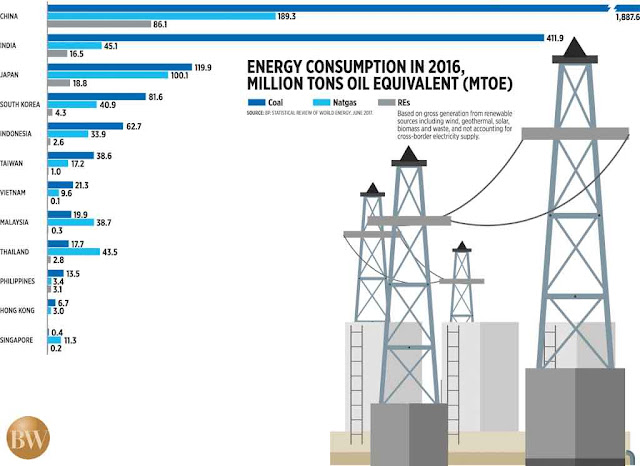 Power companies like FirstGen should focus on ensuring that electricity consumers have cheap and stable electricity available 24/7 without any brownouts, even for a minute. Instead of demonizing and suggesting the stopping of more coal power to come on stream.

The first two items I consider as cronyist or seeking a crony status from the government. Setting the energy mix should be done by the consumers, not government. The previous Petilla/Monsada plan of 30-30-30-10 energy mix for coal-natural gas-renewable energy-oil respectively is wrong and has no sensible basis. It is good that new DoE Secretary Cusi has dumped it in favor of 70-30-10 energy mix for baseload-mid merit-peaking plants, respectively.

Government taxes should apply to all technology — coal, natgas, hydro, geothermal, etc. — no special privileges of tax breaks and other non-fiscal sweeteners. To ask for tax and non-tax privileges for LNG is asking for crony privileges.

We need less government regulations in setting the energy mix, less government favoritism for expensive wind-solar resulting in more expensive electricity. Government should focus on having energy laws and taxes that apply to all technology and players without any entity enjoying special privileges.
-----------------