The second week of August 2017 would possibly be the bloodiest in the drugs war of the Duterte administration. More than 80 people were murdered mostly by the Philippine National Police (PNP) in various drugs-raid and victims were described as “nanlaban eh (they fought the police).”

Perhaps 99% of all countries and governments in the world have their own “drugs war,” like the Philippines. Punishment range from imprisonment to death penalty. Many of our neighbors in the ASEAN have death penalty for drug crimes like Indonesia, Malaysia, and Singapore.

The “war on drugs” therefore is not a unique program or policy of the Philippine government, the Duterte administration especially.

What makes the Duterte drugs war unique is the absence of due process for poor victims.

True, there is due process for very rich drug suspects like those implicated in the P6.4-billion drugs smuggled from China and passed through the Bureau of Customs. Not one of the personalities implicated including the President’s son, Davao City Vice-Mayor Paulo Duterte, were shot or murdered. They enjoyed due process of investigations, filing of affidavits, dismissal of allegations, if proof is weak.

It is the poor or several middle class or rich but not-politically connected people who get murdered on mere suspicions of being drug users or pushers. Of the roughly 9,000 estimated casualties in the Duterte drugs war, majority are labeled by the PNP as death under investigation (DUIs). However, for those who were killed outright by the PNP because they supposedly resisted arrest, no police investigation is expected.

These are state-inspired murders. The President himself is urging the police to have more deaths for drug suspects, warning the Commission on Human Rights (CHR) and other human rights advocates that he will order the police to shoot them.

The continuing murders from mid-2016 — when the Duterte administration was inaugurated — to the present has coincided with the big increase in the government budget, P667 billion in 2017 and P417 billion in 2018. I checked the PNP’s budget and I wondered why its allotment for this year fell by P17B despite the increase in personnel from 184,000 to 194,000 during the same period. What explains this discrepancy?

In interviews by various media (local and foreign) and human rights groups of self-confessed but anonymous murderers, the murderers claimed that they get cash from the PNP for each murdered victim, usually previous or current drug users or pushers but people who are generally poor. Remember also the testimonies at the Senate of several ex-Davao policemen (Lascañas, et al.) who claimed they got paid by then Davao City Mayor Duterte for the murders they made.

If this claim is true — and I hope it is not — where would the government get extra resources given the decline in the PNP budget? 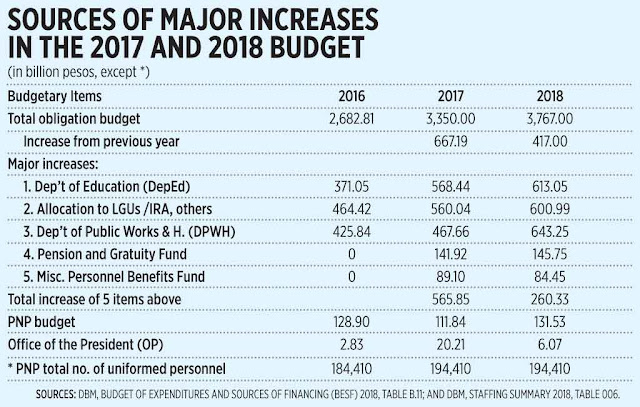 If the claims of the anonymous hired murderers, of Lascañas et al. are true, then the extra resources may be sourced from “Miscellaneous personnel benefits fund” and from “Gratuity fund.” But since this is only surface data, this is hard to prove.

On another note, the Economic Freedom Network (EFN) Asia will hold its annual meeting and conference this coming Sept. 11-12 in Kuala Lumpur, Malaysia. While the focus is on economic freedom and trade, political freedom will also be tackled among network members because there are instances of decreasing political freedom and rising dictatorial trends in the region. These include the continued rule of military junta in Thailand and the rise of murders in the Duterte government.

Economic freedom cannot prosper well in an environment of threatened political freedom and decline in the rule of law. Rise in public health care spending to save the lives of sick and weak people becomes a farce when the same government is engaged in state-inspired murders by the thousands.