Private property rights that people and businesses enjoy are among the cornerstones of a free and dynamic society. People have exclusive rights on what to do with their private properties — use them, sell, rent out, or donate.

However, when rights to private property — both physical and intangible assets — are unprotected, society can quickly degenerate into disorder. As a result, consumers will be unable to recognize which among manufacturers and service providers are trustworthy and which are suspicious.

IPRI is derived by getting the score (1 to 10, 10 being the highest) of each country covered in three major areas:

1. Legal and Political Environment (LP), covers judicial independence, rule of law, control of corruption, and political stability of a country or economy.

Countries with high scores in two or all three of these areas will have a high IPRI overall score and global rank (see table). 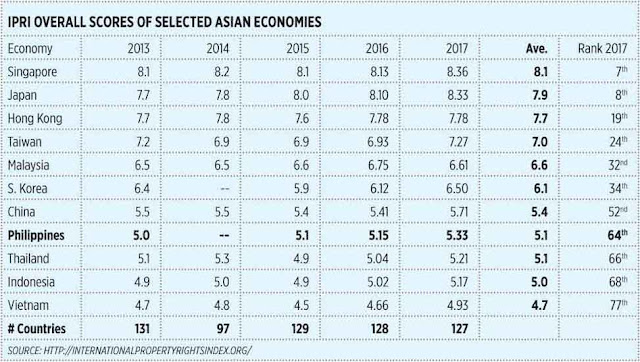 Among the important insights in the above numbers are: One, the more developed the economies are like Singapore and Japan, the higher the IPRI score and global rank. Which implies that as private property is better recognized and protected, there are more economic activities and innovations that occur.

Two, the Philippines experienced some improvement in its global rank, from 77th out of 131 countries in the 2013 report. It rose to 64 out of 127 countries in 2017. Its low score in legal and political environment was compensated by its high score in physical property rights.

One emerging issue in IPR non-protection is plain packaging (PP) of tobacco products purportedly for health reasons. Besides being slapped with high taxes, tobacco products also feature graphic warnings on packaging. Advertising tobacco products have also been restricted and smoking in may areas have been disallowed, which are part of several moves to deter people from lighting up.

These have been tried in many countries but smoking incidence does not seem to significantly decline as people shift to cheaper and often, illegal, illicit products. So the next step is to prohibit the use of a tobacco brand, logo, or trademark. This has been done in Australia and there are plans to introduce legislation in Singapore, Malaysia and Taiwan.

This plan does not appear to be right because a brand or logo of a company represents how effective it is in developing consumer loyalty and service. Imagine also if all ice cream, all soft drinks, all beer, all wine, etc. will simply be labeled as “ice cream,” “soda,” “beer,” etc. with no brand recognition of who produced or manufactured the products.

Or all government departments and agencies (DoH, DoF, DPWH, NEDA, etc.) will lose their logo and will simply have a generic brand “Philippine government,” it would not seem right.

I have never been a smoker nor have I been a fan of smoking but was once a fan of tobacco ads in cycling or in the F1 race. But I will not recommend the scrapping of a brand or trademark of companies in a particular industry. People who hate the companies should attack them as such and they may even use the company brand for their attacks.

Intellectual property rights like medicine patents, song copyrights, company brand or trademarks, play an important role of recognizing efficiency and innovation. Consumers look up to these brands and decide which ones to support and patronize and which ones to reject based on their specific needs and interests.

After rising taxes, health warnings, and business regulations are in place, governments should leave individuals and allow them to seek their own happiness without harming other people.

Bienvenido S. Oplas, Jr. is the president of Minimal Government Thinkers, which is a member of EFN Asia and the Property Rights Alliance (PRA).
---------------