A repeated argument by many sectors clamoring for suspension or closure or higher taxation of large mining projects is that the taxes, fees, and royalties they pay is very small. So there is a need to further raise the tax.

At the House of Representatives, there are bills proposing to raise the mining excise tax from 2% to 10% to generate bigger taxes from the industry.

However, is it really true that mining taxes and fees are “very small” so government should raise them (or even shutter their operations to preserve the environment?)

Table 1 was constructed to test their arguments’ validity. Please have patience reading what the numbers in various asterisks mean. 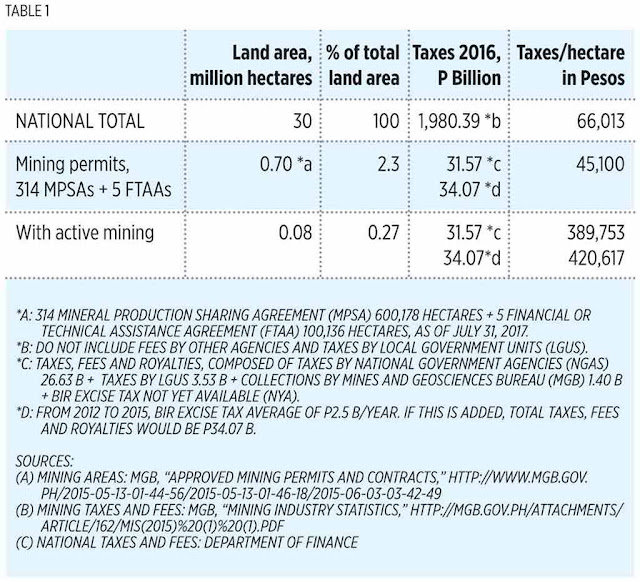 One, of the Philippines’ 30 million hectares total land area, only 700,300 hectares have mining permits from 319 companies, of which only 81,000 hectares are in active mining. The balance of roughly 620,000 hectares are for the various structures like offices, housing, school buildings, hospitals, sports, and training centers for personnel; roads, mined out areas for rehabilitation; future mining sites.

Two, these 81,000 hectares or 0.27% of total land area contributed an estimated of P420,000 per hectare in taxes, fees, and royalties to the national and local governments in 2016. That is more than six times the overall national taxes per hectare of the country.

Hence, the argument by many anti-mining groups that “government tax revenues from big mining is small so government should overtax, suspend, or close as many big mining firms as possible” is wrong. It is invalid.

Note further that the numbers on mining taxes and fees do not include mining expenses that go direct to the communities as mandated by law, not to the government. These include spending like (a) Social Development and Management Program (SDMP), (b) the annual Environmental Protection & Enhancement Program (EPEP), (c) Community development program (CDP), (d) Environmental work program (EWP), (f) Safety and health program, others.

Two of several fiscal reforms in the mining industry to make the taxation system more transparent and easily understood would be the following:

One, MGB is required to disclose in its regular “Mining Industry Statistics” the annual cost of various mandatory/obligatory programs and funds as mentioned.

Two, the mining excise tax of 2% can be raised to 6% or 10% or even higher but other taxes and regulatory fees, mandatory programs, and funds should be reduced or abolished. It is not possible to keep raising the taxes, fees, royalties, mandatory programs and funds without resulting in business distortion. Like honest firms closing down or going bankrupt while others will be forced to become dishonest just to remain in business.

MGB should show more updated data about small scale mining — estimated land area covered, gold production, taxes and fees paid, others. Lots of environmental damage with zero mine rehabilitation or reforestation after are done by small-scale mining, like those in Mt. Diwalwal as mentioned by President Duterte during his second SONA last July 24.

Government should always bear in mind the importance of the rule of law. Mining laws should apply to both big and small players, foreign and local. Creating exceptions and favoritism makes a mockery of the law.

Bienvenido S. Oplas, Jr. is the President of Minimal Government Thinkers and a Fellow of SEANET and Stratbase-ADRi.
---------------