The House of Representatives led by Speaker Pantaleon Alvarez passed the proposed 2018 budget and it gave the Commission on Human Rights (CHR) a mere P1,000, less than $20, budget for 2018. Key Duterte officials are displeased with the CHR, headed by Atty. Chito Gascon (a friend since the 80s in UP Diliman) because of its investigation of many murder cases where the main suspects are policemen.

Last Wednesday, September 13, while I was queuing at NAIA for my flight to the US via Korean Air, Chito called me, he would be on the same flight as mine. Picture muna :-) 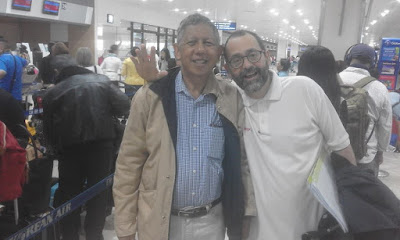 The CHR was created by the 1987 Constitution, not by Congress and much less by the House of Alvarez. Alvarez wants Chito to resign as CHR head, then he will reinstate the proposed P600+ million 2018 budget. Now look at his reasoning below. Low life logic. 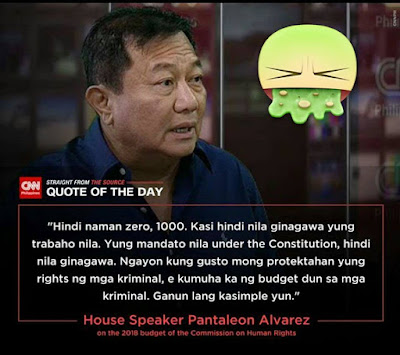 Another lawyer-friend from UP, Gigo Alampay, explained it well in his fb wall the other day.

It is NOT the job of the CHR to investigate violations committed by a non-state or non-government actors, such as criminals. This is not because the CHR condones those heinous acts. Rather, it is simply because investigating crimes is the job of the police. Requiring the CHR to expand its responsibilities to these violations is not only redundant. It would also be a massive waste of manpower and resources. (Is Congress prepared to add the equivalent of the PNP's billion-peso budget to the CHR?)

Do not fall for what appears to be a systematic effort by the President, legislators in the majority, and by Pro-Duterte apologists to discredit the CHR by confusing the public on this issue, and insisting that the CHR must investigate ALL cases of human rights violations. 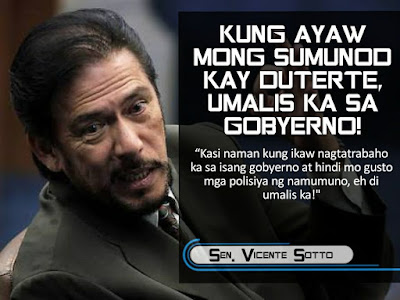 When I posted my photo with Chito in my fb wall, a certain Manuel Saludadez jumped in with this accusation. 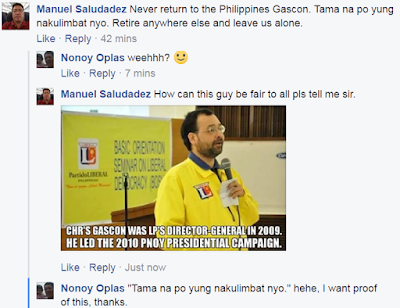 The man did not provide any proof, even news link. I have a term for this type of attitude -- emotional or arrogant idiocy. If one should make a serious accusation of robbery or plunder ("nakulimbat"), one should present some reliable proof. Otherwise, remove the comment or say "sorry, I do not have proof, I take back my words" or similar statements. If there is humility. There is none.

Meanwhile, I think the Senate should also give a P1,000 2018 budget for many agencies that are favored by the President and the Speaker, like the DOJ. That way, a compromise can be made between the two chambers.
Posted by Bienvenido Oplas Jr at 6:09 PM