The corporate social responsibility (CSR) of a company is to satisfy its (a) customers via good quality products and services at a good and competitive price, (b) workers via good pay and benefits and safe working conditions, (c) shareholders via good returns on  their investments. For companies in the extractive sector like oil, gas and mining, (d) minimize environmental damage and rehabilitation after site closure.

That's my own understanding or definition of CSR. I don't believe that a company has the "responsibility" to provide scholarships to poor students, conduct medical missions, reforestation, etc. while it bleeds its employees with super low wages and dangerous working conditions, or produce lousy or over-priced products and services to its customers. Any PR services like giving scholarships, medical missions, etc. should be done after satisfying the three (or four) important players in the company. My previous articles on the subject are here,
CSR as "mandatory requirement" = extortionism, April 05, 2006
CSR of a company is to make profit, March 03, 2011.

Nonetheless, drawing up a CSR varies from one company or industry association to another, there is no single "CSR for all companies" in a given industry, sector or country. And it's good to have variety and diversity in how companies and private enterprises define their own CSR.

During the Mining Conference 2012 in Sofitel Hotel last September, a presentation by the Institute for Development and Econometric Analysis (IDEAS), CSR Mining Scorecard Initiatives: Zooming in on the CSR Industry Scorecard, these slides were among those shown.


CSR of the Chamber of Mines of the Philippines (COMP), and its CSR Guidebook. Each of the six pillars of the Code have "elements" and details. 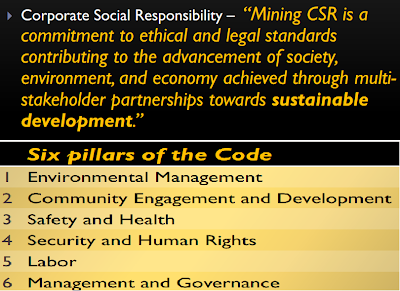 The “Australian Minerals Industry Code for Environmental Management” or "The Code‟ of 1996. This is to ensure that the country's practices in uranium mining, milling and rehabilitation meet world-class standards. 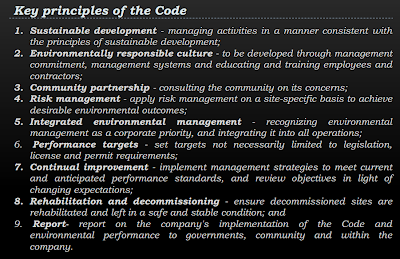 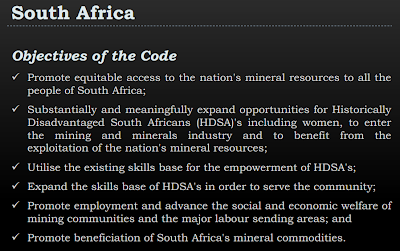 Then it has a scorecard for SA's mining industry focusing on human resource development, and employment equity.

What caught my attention in Australia's Code is that "The Worldwide Fund for Nature (WWF) stepped in to review the Code in 1999, coming up with a scorecard to have a more concrete basis in reviewing performance and adherence of companies to the Code."

The WWF drew nine performance indicators, the first of which is "External verification" with a 15 percent weight in the scorecard. It says,

I thought that mining and natural resource extraction is a contract between a private company and the owner or guardian of the resource, the government. The latter represents the people and communities in the mining and surrounding areas. A publicly listed company also reports certain mining operations data to the public and the stockholders. Now there is a third player that the private company (and the government?) must submit data to, and they can possibly harass the company for producing "inaccurate data".  Who appointed the WWF to be that "external verifier", they themselves? What a shame.


environmental and social impact of its mining and exploration, information on inputs (resource consumption) and outputs (emissions, tailings, and other waste), impact at the mine site, biodiversity, the views of local communities....

Compliance information indicates the extent to which the company is meeting the requirements of its operating license(s) and its own internal standards, and how it addresses incidents of failure....

The report should be easy to understand with text that is well supported by tables and graphs. The style should be transparent and open, such that it seeks to inform rather than to obscure, i.e. it covers successes and failures. The report should be readily available, both in hardcopy and on the internet, and have a feedback mechanism.

Can you believe that -- self-styled, self-appointed activists dictating their terms and expectations how mining companies should report to them, as if there are no prior and existing government requirements on mining that these companies must comply. The WWF thinks they are the "second government" that private enterprises must report to? What a shame.

Nonetheless, the presenter did not indicate if these impositions by the WWF were carried by Australian government or not.

Then in the COMP website, it proudly bannered, Responsible Miners Take Part in Earth Hour Celebrations Anew. With due respect to the COMP and its member companies, the WWF is a bunch of climate rent seekers, and glorifying darkness for one hour aka "Earth Hour" is glorifying climate alarmism and stupidity. I have written several papers about this idiotic Earth Hour campaign by the WWF,

Here are some recent data to show that "man-made/anthropogenic global warming" or its cousin, "man-made climate change" is a fictional conspiracy designed to collect more taxes and donations from the public, create more environmental regulations and bureaucracies, justify more global junkets and rackets for the "earth saviours."

(1) Global air (lower troposphere) temperature (northern hemisphere + tropics + southern hemisphere) as of end-March 2013, vs. UN IPCC projections and guesses. Global air temperatures as measured by NASA satellites and interpreted by the University of Alabama in Huntsville (UAH) and the Remote Sensing System (RSS). The dark line is average for the 44 climate models by the IPCC.

CC is also true. Climate changes from warming to cooling to warming to cooling, in endless, natural climate cycles, with or without humans and their SUVs or bicycles. So when the WWF plus Greenpeace, Al Gore, UN IPCC, etc. say that we should send them more money (taxes, fees, penalties, donations, etc.) so they can "fight CC" and "save the planet", they are simply fooling the public, for various reasons. Like ego-tripping, or global junkets, or that big money racket.

For many private enterprises, those in the mining sector in particular, they should be wary of the WWF. If the Fund says they want to protect Tubbataha, or various endangered species in the moumtains and the seas, fine. What is wrong is when they over-extend that the planet is in "grave danger due to man-made CC" and useful human activities like mining should be over-regulated and over-taxed as much as possible to help "save the planet". This is extending simplistic thinking and climate stupidity.
----------

What is the difference between your accusation here:

"Can you believe that -- self-styled, self-appointed activists dictating their terms and expectations how mining companies should report to them,"

"That's my own understanding or definition of CSR. I don't believe that a company has the "responsibility" to provide scholarships to poor students, conduct medical missions, reforestation, etc. "

where you ALSO tell people what to do?