Payment for the Philippine Health Insurance Corporation (PHIC or PhilHealth) is among the four mandatory monthly payments that people in the formal sector must accept. Meaning even if they are not satisfied with many government services, their monthly take home salary becomes smaller because of these mandatory deductions and forced contributions. The other three are SSS/GSIS, Pag-IBIG, and the withholding personal income tax.

Before tackling the costs and benefits of PhilHealth, here is an important situationer on healthcare in the Philippines in 2009, the latest available data.

In red are non-infectious or non-communicable diseases (NCDs).  Diseases of the heart or cardiopathy include coronary heart disease, cardiovascular disease, heart failure, hypertensive heart disease, cardiomyopathy, and so on. Vascular diseases or more commonly called as “stroke” refer to brain dysfunction related to diseases of the blood vessels supplying the brain. Main cause is hypertension. Cancers, there are probably 200+ different types of cancer.

In terms of the main causes of morbidity, NCDs do not figure much, except hypertension. Infectious and communicable diseases are the top causes.

Despite these, the average lifespan of Filipinos is rising, 67 years and 73 years for male and female, respectively, or average of 70 years for both sexes. This is lower than the Asian average but higher than the global average.

The cost of PhilHealth.

The budget of the Department of Health has shown huge increases recently. From only P18.91 B in 2008 to P31.83 B in 2011, then P42.08 B in 2012 and P53.06 B this year.  The big rise in recent years is due to increased premium payment for the DOH sponsored program for PhilHealth membership, some 5.2 million households were newly enrolled in PhilHealth. The  DOH budget is from taxes and other government revenues plus borrowings.

PhilHealth spending does not come from taxes or borrowings. It comes from mandatory contributions of those in the formal sector, government and private, from individually-paying self-employed people, and from the DOH and LGUs who sponsor the annual premum of several million poor households.

LGUs also have their own healthcare programs for their poor residents, like having their own city or provincial hospitals, barangay/municipal/city health centers, and LGU payment and enrollment of some 5 million poor households to PhilHealth, meaning the LGUs paid for their annual premium. And other government agencies also provide free or cheap healthcare to the poor, like the Philippine General Hospital (PGH), AFP hospital, PNP hospital, and so on.

People who get hospitalized due to serious diseases will worry less when the hospital bill comes. PhilHealth will pay for various services such as physicians’ fee, laboratory and diagnostic tests fee, hospital room fee, surgery if any, medicines, and so on.

Traditionally, PhilHealth covers only patients who are confined in accredited hospitals for at least 24 hours.  Meaning if the patient stays in the emergency room for 23 hours or less and go home afterwards, the corporation will not pay for any of the bill.

In a presentation last April 10, 2013 at the MeTA Philippines forum held at the Asian Institute of Management, PhilHealth officials led by Dr. Riza Herrera and Dr. Liezel Lagrada discussed an update about the corporation’s packages 1 and 2. Among the striking facts in their presentation was the big jump in claims for four major NCDs from 2002 to 2012. Claims for  hypertension rose from 50,000+ to around 220,000; cancer-related claims rose also from 50,000+ to around 210,000; and heart diseases, from about 25,000 to around 110,000. 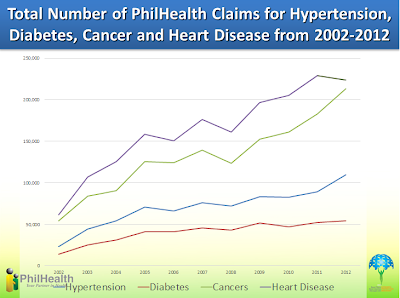 The above chart confirms the prevalence of NCDs as leading causes of death in the country, also worldwide. 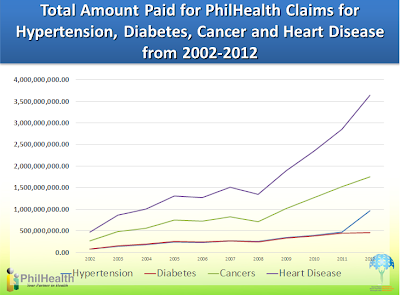 The plan of PhilHealth and the DOH, with signals from the UN and WHO, is to control NCDs.

The exchanges that followed the presentation were very lively and spontaneous as the audience came from various backgrounds – drugstore owners, drug manufacturers, academe, NGOs, health professional associations, DOH, PhilHealth and so on. Most of the questions,  comments and suggestions, explicitly or implicitly, were directed at how PhilHealth should further consolidate and centralize more healthcare delivery.

And this is where I do not agree. People should not expect too much from PhilHealth. More expectations, more disappointment. As mentioned above, there are other government agencies, local and national, that provide free or cheap healthcare for the poor even if they are not PhilHealth members and contributors. Then there are private foundations, charitable individuals, civil society groups like Rotary Clubs that conduct regular medical missions to the poor.

PhilHealth must veer away from spending more  on outpatient services for NCDs. It must focus instead on infectious or communicable diseases, pediatric diseases. A patient who has dengue or malaria can easily be treated even if hospitalized for several days. After that the patient goes home and may not come back to the hospital and take PhilHealth claims for several years.

Contrast that to someone who has lung cancer due to over-smoking, or has liver cancer due to over-drinking, or fat and has various diseases of the heart due to over-eating and sedentary lifestyle. This type of patients will keep coming and coming for difficult and complicated treatment and maintenance medications. PhilHealth reserves can sink if not go bankrupt with more of this type of patients. Or PhilHealth will raise the premium from the current 3 percent to 5 percent or higher just to prevent bankruptcy.

The appropriate policy is to limit PhilHealth exposure to the former type of patients for outpatient services and primary care package. If people can have money to buy lots of alcohol or tobacco or fatty food and drinks, then they should have money also to buy private health insurance, on top of their PhilHealth insurance and DOH or LGU healthcare spending.

Let private providers of healthcare offer various packages at various premium payment for various people with various income. Those who are less responsible of their own body or their family should get more elaborate private health insurance. If they are poor, they can approach private charities, charitable individuals and friends, to cover for their funding gap.

Private healthcare providers are under pressure to produce good services to their clients, to satisfy their customers. If their customers are unhappy, they can go bankrupt. This pressure is absent in government healthcare providers because their funding comes from forced and mandatory payment. Even if the public are unhappy with their services, people are forced to contribute money to these agencies.
----------