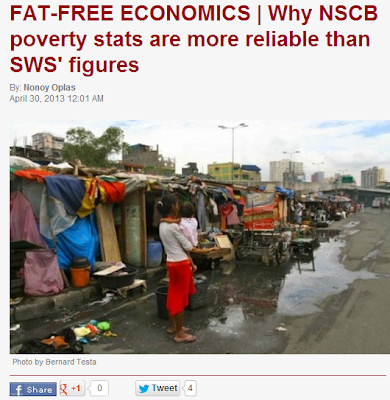 Last week, the country was bombarded with stories that carried descriptions such as “high poverty”, “poverty unchanged”, “more than half of Filipinos poor,” among other variations. Two institutions triggered these stories.


Last Tuesday, the National Statistical Coordination Board (NSCB) released its2012 First Semester Provincial Poverty Statistics, reporting that poverty incidence at 28 percent of the population in the first half of last year was unchanged from the same period in 2006. The subsistence incidence based on a food threshold was 13.4 percent last year, slightly lower than the 14.2 percent in 2006. 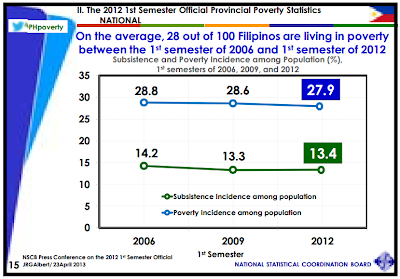 The following day, the Social Weather Stations (SWS) released its First Quarter 2013 Social Weather Survey: Families rating themselves as Mahirap or Poor at 52%. The self-rated food poverty based on food threshold budget stood at 39 percent of the population. 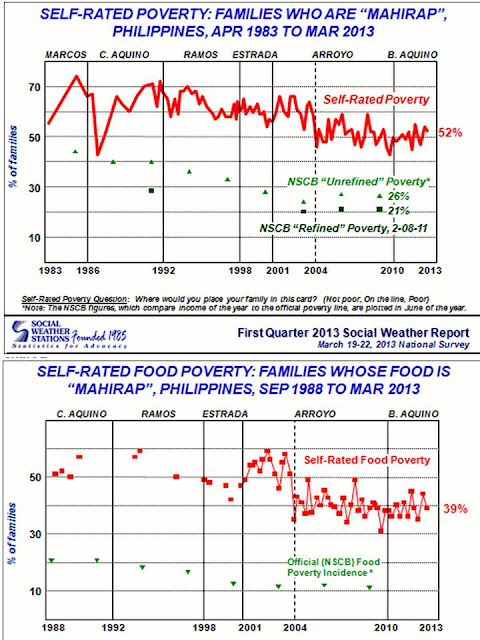 First, the NSCB report was based on the Family Income and Expenditure Survey (FIES) of the National Statistics Office, whereas the SWS report was "self-rated." The former used highly quantitative measurements while the latter was based on a subjective assessment by the respondents.

Second, the threshold levels were different. Under the NSCB, food and subsistence threshold was P5,458; non-food needs, P7,821, for a minimum P13,279 per month poverty threshold. 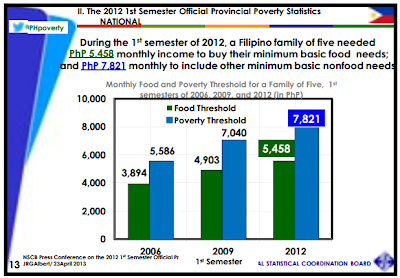 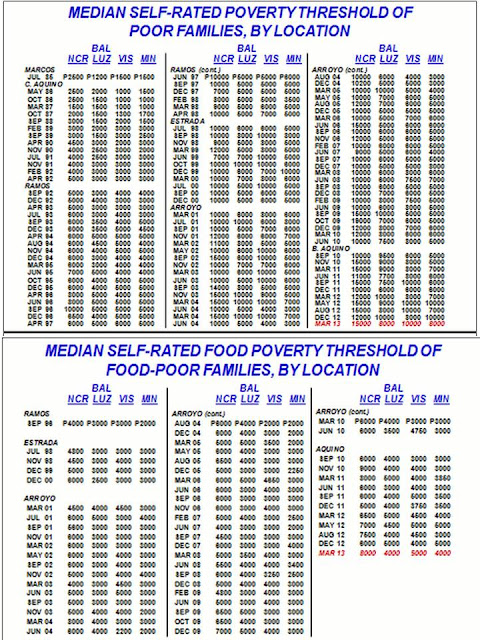 There was a tendency for survey respondents to somehow exaggerate their degrees of poverty and needs for at least two reasons. One is that it could prod the government -- both national and local -- to expand existing subsidies, or invent new aid programs on top of existing ones, if poverty and hunger incidence remained high.

Two, people would not reveal that one reason for their poverty and/or hunger was their high consumption of alcohol and tobacco products, or high spending on lotto, jueteng, cockfighting and other forms of gambling, relative to their household income. There is a tendency to under-report or fail to report this kind of spending in poverty surveys, whether done by the government or private outfits like the SWS.

Mentioning the second reason would be considered as “politically incorrect” because it is tantamount to “blaming the victim.” But those who say this should recognize that the ultimate victim in society would be the taxpayers, especially the fixed-income earners, who are automatically deducted 30 or 32 percent monthly, as government keeps expanding its expenditures.

Posted by Bienvenido Oplas Jr at 7:47 AM