Various types of cancer is among the leading causes of mortality (death) and morbidity (sickness) in the Philippines and around the world. It is a non-infectious or non-communicable disease (NCD) that is caused more by genetics and/or lifestyle. For instance, tobacco-related lung cancer, and alcohol-related liver cancer, are the top two killers among cancer for men in the Philippines, according to the article by Reiner Gloor of PHAP below.

A friend in the free market movement here, Joshua Lipana, died this week at a young age of 21, due to a rare and aggressive cancer (T-Cell Lymphoblastic Lymphoma). I mentioned a few times here that my own elder brother died of prostate cancer, and his wife (my sis in law) died of colon cancer, several years ago.

As medical science improves, discovery of more rare diseases that used to be lumped or identified with other diseases is becoming easier. But treating them is another matter and will not be easy. Reiner however, says "researchers are working on more than 800 innovative medicines that are either undergoing clinical trials or regulatory review. Due to these developments, cancer can now be better managed and even beaten."

Then early this month or late last month, we read a new strain of bird flu, the A(H7N9) that the WHO called as "one of the most lethal so far". Not as lethal perhaps as the A(H1N1) strain that killed more than 300 people middle of the last decade.

These H1 and H7 strains, unlike cancer or hypertension, are infectious or communicable diseases. Infection usually starts from chicken and other birds, to humans. So the immediate action is isolation of the patient from the rest of population to prevent further infection, while treating the patient. 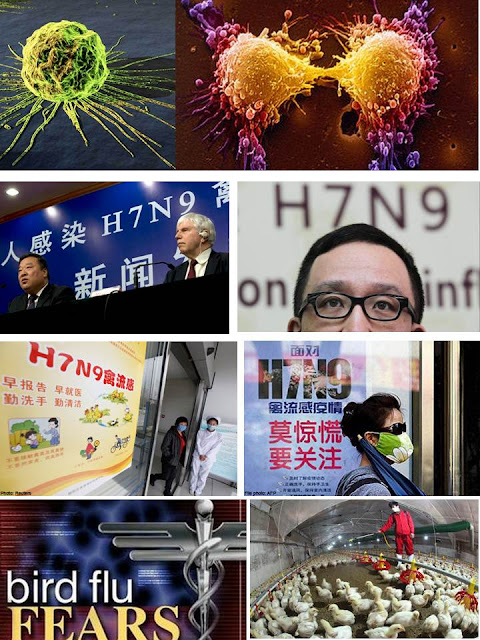 Government has an important role in controlling infectious diseases, like detecting and isolating infected people who travel from one country to another through airport medical screening. But government, I believe, has little role in controlling NCDs as these are usually difficult, complicated and expensive to treat diseases, requiring more personal responsibility (remind people that over-eating, over-drinking, over-smoking is not good for their health). If government will put more resources on controlling NCDs, it will further worsen already high public indebtedness, which will have negative effect on other public spending over the long term, like spending to maintain peace and order and ensure a credible justice system.

And of course, governments should not make the business and scientific environment antagonistic to drug innovation. They should not politicize innovation and reward rent-seeking via IPR-busting policies.


The four major NCDs are cardiovascular diseases, diabetes, chronic respiratory diseases, and cancers that have altogether prematurely claimed the lives of 38 million people, representing about 63% of the total global deaths in 2008. Studies indicate that the major NCDs are affecting the developing world and lower-income populations hardest.

This is particularly true for cancer, which accounted for about 7.6 million global deaths in 2008. By 2030, cancer deaths are also expected to soar to 11 million worldwide. The World Health Organization (WHO) also disclosed that about 70% of all cancer deaths occur in low- and middle-income countries.

Cancer can affect any part of the body. A defining feature of cancer is the rapid creation of abnormal cells that grow beyond their usual boundaries, and which can then invade adjoining parts of the body and spread to other organs. This process is referred to as metastasis which is the major cause of death from cancer, the WHO said.

Locally, the Department of Health recently led the observance of the National Cancer Awareness Week in a campaign to boost public consciousness on the disease. Such an awareness drive is important specifically for the Philippine Society of Medical Oncology (PSMO), which considers information as a keystone to preventing and treating cancer.

The need to raise awareness on cancer has become more evident with the GLOBOCAN Project report, which estimated that there had been more than 51,000 cancer deaths in the Philippines in 2010.

The GLOBOCAN Project, which provides global incidence of, mortality and prevalence from major types of cancer, reported that leading new cancer deaths among Filipinos in 2010 include those involving the lung, liver, breast, colon/rectum, leukemia stomach, cervix uteri, brain, prostate and pharynx.

On the other hand, breast cancer was the number one cause of new cancer deaths among Filipino women also in 2010. It is estimated that more than 4,000 Filipino women died of breast cancer or 18% of all total deaths during the same year. Around 2,197 women and 1,984 others succumbed to lung and cervical cancers, respectively.

Despite the threats posed by cancer, the disease can be reduced and controlled by implementing strategies for prevention, early detection and care for patients with cancer. These include modifying key behavioral and dietary risk factors as well as early detection and screening tests which are important in the diagnosis and treatment before cancer becomes advanced. Vaccination against human papilloma virus (HPV) and hepatitis B virus also help in cancer prevention.

PSMO President Dr. Felycette Gay Martinez-Lapus explained that the fight against cancer requires a collaborative effort among the physician or physicians, the patient, the patient’s family and friends.

She added that treating cancer is a delicate balancing process. The general aim is to reduce tumor growth while ensuring that any potential side effects do not compromise the patient’s quality of life to the extent that the treatment does more harm than good.
Dr. Martinez-Lapus acknowledged that in recent years, there has been a surge of innovative drugs which has forever changed the landscape of cancer treatment.

She said that as opposed to about 40 years ago, life expectancy have increased with new medicines that target the cancer cells directly. Today, targeted therapy is more precise in that it is formulated to act against a specific type of cancer unlike previous treatments.

At the moment, researchers are working on more than 800 innovative medicines that are either undergoing clinical trials or regulatory review. Due to these developments, cancer can now be better managed and even beaten.

FOLLOWING the global alert against a novel coronavirus, health authorities are now monitoring a new deadly strain of a bird flu virus that has infected 15 people and killed six others in China.
The close monitoring is prompted by the ability of any animal influenza virus to infect people and cause a pandemic, similar to the A(H1N1) pandemic in 2009.

Symptoms of infection from the novel virus include fever, cough and shortness of breath.

The World Health Organization (WHO) said that whether the influenza A(H7N9) virus can cause a pandemic is still unknown. An influenza pandemic occurs when a new influenza virus emerges and spreads around the world, and most people do not have immunity. Viruses that have caused past pandemics often originated from animal influenza viruses, the WHO added.

The Centers for Disease Control and Prevention (CDC) said that while the virus has not been determined to have the capability to cause a pandemic, it warned that influenza viruses constantly change and it is still too early to conclude if the virus could not gain that ability. At the moment, the WHO stressed that there is no evidence of ongoing human-to-human transmission of the virus.

The current investigations include how the H7N9 virus would mutate and if it would become easily transmissible from person to person while retaining its capacity to cause severe disease or even death.

Early this week, more than 530 close contacts of confirmed cases were being monitored as part of the ongoing disease surveillance. The CDC, on the other hand, is confident that it is not spreading widely from human to human since many of the close contacts did not develop the illness.

The laboratory-confirmed cases have come from several different provinces in eastern China and are said to be not related. The report included two family clusters. The cases are among adults ages 27 to 87 and a case involving a four-year-old child. All cases had onset between Feb. 19 and March 31.

Meanwhile, no cases have been reported outside China. Global health experts have not imposed any special screenings at points of entry but some countries have stepped up their screening efforts. Most countries, including the Philippines, continue with their airport screenings following the H5N1 avian flu outbreak.

The WHO said that the influenza A H7 viruses are a group of flu viruses that normally circulate among birds. The influenza A(H7N9) virus is one subgroup among the larger group of H7 viruses. Although some H7 viruses (H7N2, H7N3 and H7N7) have occasionally been found to infect humans, the CDC noted that this is the first time that this bird flu subtype (H7N9) has been found in people (For more on A H7 viruses, go towww.who.int).

Preliminary test results showed that the A(H7N9) viruses are found to be sensitive to antiviral medicines oseltamivir and zanamivir. While no vaccine is available for the prevention of influenza A(H7N9), the viruses have been isolated and characterized to identify the best candidate viruses. When it becomes necessary, these candidate viruses can be used to manufacture a vaccine.

Meanwhile, health authorities are strongly recommending basic hygiene to prevent infection, including include hand and respiratory hygiene as well as food safety measures.

At the moment, the WHO said that it does not advise any travel measures for persons visiting or leaving China. It added that there is no evidence to link the current cases with any Chinese products and therefore does not impose any trade restrictions.

For more information, consult your doctor or you may log on to www.phap.org.ph orwww.phapcares.org.ph. Join us on www.facebook.com/people/Pharma-Phap/. E-mail the author atreiner.gloor@gmail.com.
-----------