Operations done. No more 2 litres in my right lung. I feel much better. No more drowning sensation. I want to live. (April 4, 2013)

I heard of him first sometime in 2010 then I started visiting his blog, http://joshualipana.com/. After several email exchanges, I requested for a meet up, along with Froilan, the owner of The Vincenton Post, http://fvdb.wordpress.com/ These two young men are among the prominent leaders in promoting Objectivism and Ayn Rand's philosophy in this country.

Last April 12, 2011, we met up at Starbucks, Shangrila Mall, Ortigas. When I saw him personally, I thought he was only a high school student. He said he was 19. We discussed lots of things -- from objectivism to libertarianism (anarchy, minarchy, other shades), intellectual property rights (IPR), RH bill (now a law). He was very articulate and passionate. He and Froilan are young guys with big, bright minds. 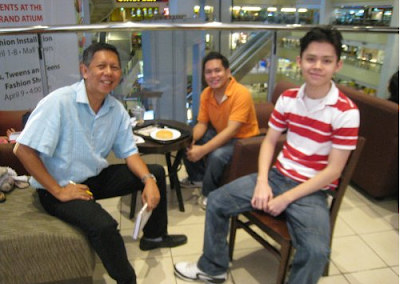 After Starbucks, we went down to a bar on one side of the same mall. And we discussed more until late evening. We should have been exchanging ideas for about 6 hours that day. 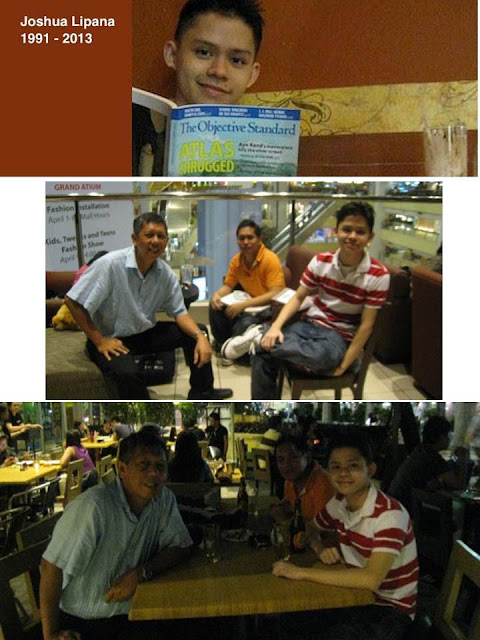 I told him and Froilan that I wanted a part 2 of our meeting and discussions. We tried several skeds but they never materialized. Until I learned that Joshua was fighting cancer.

At a young age, Joshua was the Assistant Editor of The Objective Standard (TOS) since October 2011 until he died. After high school, he did not go to college, deliberately, as he wanted to write more about objectivism and the free market, and he thought that pursuing a college degree might be a distraction from his passion. 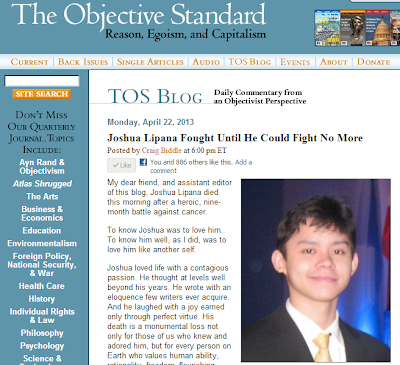 His blog is not regularly updated as he was busy with TOS. But even if he was fighting cancer, he managed to publish several articles, below. 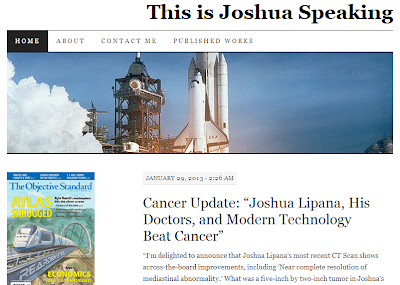 Rest in Peace, my friend. I am very sad.

There should be a big reason for us why you left early...

serious question noy, whats with your friendship with froi? he is the most intellectually uncurious guy, not to mention he loves name-calling.

My friendship with Froi, along with my friendship with the libertarian anarchists (I'm a minarchist), even with "social liberals", is purely based on ideological affinity. I respect personal behaviors as I believe there should be various shades of free marketers. Free market thrives on diversity and spontaneity, never on monotony and central order.

" I respect personal behaviors as I believe there should be various shades of free marketers."

are all personal behaviors worthy of respect?

if one is intellectually uncurious, and downright nasty with the namecalling, is that a "personal behavior" you respect?

You're telling me whom to respect and whom not to? One reason why I really dislike statists and interventionists. Telling people how they should behave, pathetic.

i merely asked: "are all personal behaviors worthy of respect?"

is there any limit to that? is " intellectually uncurious, and downright nasty with the namecalling," under that limit?

also, did u call me a statist for asking a question? hmmm... maybe you and froi and the same

excuse me, but what about an acknowledgement that you accused me of something i am not guilty of.