Mining, the science and engineering of discovering and extracting valuable minerals for various human needs, is among the high risk investments in the country and elsewhere around the world. Since almost all governments worldwide follow the Regalian doctrine saying that "all lands of the public domain belong to the State, that the State is the source of any asserted right to ownership of land and charged with the conservation of such patrimony", then all economic and business activities that deal with natural resource extraction must deal with governments.

Political risks therefore, can be high as there are various government agencies and institutions that a mining firm must deal with, from local to national government units, from the Executive to Legislative to the Judiciary. And even civil society organizations (CSOs) that can create certain negative publicity and political pressure can be part of the political risks.

Natural risks or those coming from nature are relatively easier to deal with. Heavy flooding and erosion of an open mining pit, collapse of a containment wall of mine tailings and the wastes spill into a river or the sea, collapse of structures in underground mining. These are engineering problems which have engineering solutions. Or financial problems with financial solutions, like getting an insurance to deal with natural calamities.

In a presentation, The Mining Industry in Emerging Markets: The Philippines made during the Mining Philippines 2012 Conference last September 18-20, 2012, these three risks were mentioned:


Title Risk
A major part of legal risk is the nature of the right of the mining company in question to develop the deposit that forms the basis of the mining project... ownership right in minerals is vested in the central government, and all that can be obtained is a license to mine the minerals in question.

Tax Risk Potential taxes assessable on a mining project are numerous. The local project company may be subject to a profits tax, value added tax ("VAT") on services, royalties or other forms of local taxation. In addition, there may be withholding taxes on interest and dividend payments made offshore.

Political RiskThis is viewed by the majority of institutional investors as the number one risk in emerging markets. It might be difficult to quantify but its systemic impact is quite evident. Stability is the single biggest threat. How strong are the pertinent governing institutions? How rampant is corruption and bribery? The reason this is the greatest risk is that it can very well lead to cancellation of a project or confiscation and/or abandonment of an investment.

One example of political risk, well risk that has materialized and has created policy damage already, is portion of Executive Order (EO) 79 issued by the President on July 06, 2012. Among the new areas "closed to mining" under Sec. 1, c to e are:

These new restrictions are not found in the Mining Act of 1995 (RA 7942) or other laws created by Congress. Yet private players have to obey this new ruling and any existing project, or proposed and planned mining project on any of those four areas, will have to be shelved, even temporarily.

In a short article last April 05 in The Daily Tribune, EVP of the Chamber of Mines of the Philippines, Nelia Halcon, said among the recent risks that mining firms have to face here are:


... the moratorium imposed by the local government units (LGUs) on mining projects also needs to be addressed. She said the Mines and Geosciences Bureau (MGB) moratorium on the grant of mining tenements obscure investment promotion activities.

“If the moratorium in the grant of new mining permits will remain, which is now on its third year, the chances for the mining industry to grow will not happen and will cancel out the progress made in the past,” she said.The country also has to come out with a clear-cut policy on small-scale mining, she said.

Halcon also cited the recently issued Circular by the Bureau of Internal Revenue (BIR) indicating that companies have to pay taxes during the recovery period. “Companies are still recouping their investments during this period. This will have great implications on projects that have recently been on stream as well as on new projects, further eroding investor confidence in the country,” she said.

There you go. Uncertainties and political risks from (a) local government units, (b) Mines and Geosciences Bureau, (c) Bureau of Internal Revenue, (d) Office of the President itself. And uncertainties when the current Mining Act is revised.

On a related subject, a presentation by a friend JB Baylon, VP of Nickel Asia Corporation, entitled  Mining and Me! My personal discoveries about the Mining Industry as it addresses the challenges ahead made at DLSU Manila last January, showed these points. 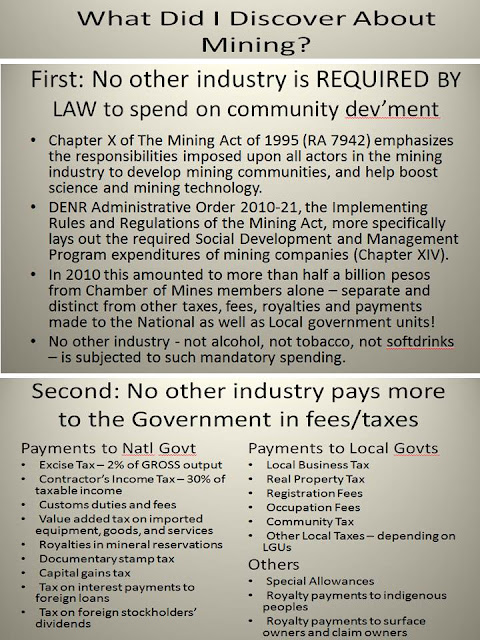 I like the three photos on point #5. From a denuded, zero vegetation and mined-out area, to thick forest cover in just three years. Many people do not know that. 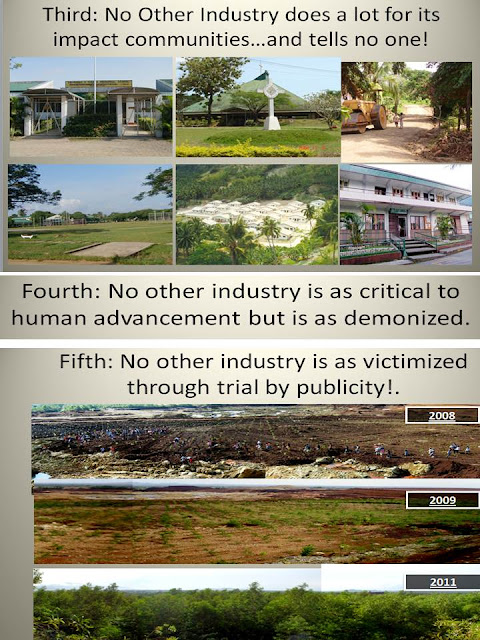 The main purpose of government is to promulgate the rule of law that will protect private property, like private investments. So when government creates new orders or regulations that significantly revise or contradict existing laws as created by Congress, this promotes not the rule of law, but the rule of men and the bureaucracy. These things need to change and government should stick to respecting laws as made by those entrusted by the Constitution to make laws, Congress.

Meanwhile, there is an interesting, well written article today about Rio Tuba written by a new friend, Carla Ravanes,  The Mine of the Matter.
------------