* This is my article yesterday in interaksyon.com. The "movie editor" that I referred here is Manny Castaneda, my co-cast in the late 80s political satire program, "Sic O Clock News" aired in IBC 13 and directed by the late Marilou Diaz-Abaya.
---------- 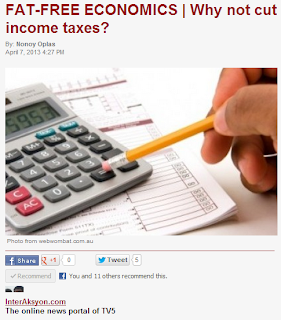 Mid-April each year is the deadline for filing income tax payments made the previous year for both individuals and corporations.  A friend, a local movie director, commented in his Facebook wall, “April, buwan ng pagbabayad ng tax. Personally, it's like throwing my hard earned money into a toilet bowl. Wala naman itong silbi sa buhay ko.”

This sentiment is common, especially among fixed income earners. For them, surrendering up to 32 percent or nearly a third of their monthly income to the government through the mandatory withholding tax is a painful reality that they have learned to accept. That is why a proposal for a low flat income tax is worth looking into, and for the following reasons:

One, a flat tax rate of 15 percent or lower would attract many investors from the rich countries of Asia, North America and Europe to do business and create jobs in the Philippines. The country's two dynamic neighbors -- Hong Kong and Singapore -- benefit from a low flat tax rate.

The investors in Europe and North America are already paying high taxes and yet their governments are still heavily indebted. Which means that taxes there will rise further, or new taxes will be created to generate the revenues required to pay off debt. Many investors want to jump ship, looking for attractive economies abroad where they can put invest their money and talent.

Two, Philippines' 32 percent top tax rate for individuals and 30 percent for corporations appear to be in the region of declining revenues on the Laffer curve. This curve shows that as tax rates rise, actual revenues decline as people either reduce work and rest more, or find various loopholes to avoid paying more taxes. In Table 1, note that countries that reduced their income tax rates since three decades ago have some of the world's most dynamic economies. Their governments realize that very high income tax rates are not good. 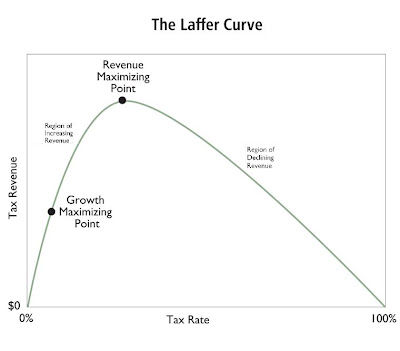 Three, a cut in the Philippines' income tax to a flat rate of 15 percent or lower can be compensated by raising the value-added tax (VAT) from 12 percent to 15 percent. Many rich people either pay very small taxes or none at all. Like many professionals, businessmen, showbiz stars, corrupt government officials, drug lords, gambling lords, land grabbers and other criminals. But these people flaunt their wealth -- their new house/s, cars, watches and jewelries, laptops and cell phones, clothes and shoes, travel and so on. All these things usually are captured by the VAT system.

Four, a low flat (or single-rate) income tax is not a novel idea, having existed in many countries. For instance, those that have 10 percent flat rates are Albania, Belarus, Bulgaria, Kyrgyztan, Kazakhstan, Macedonia, Mongolia and Serbia. Macau imposes 12 percent and Russia, 13 percent. Those that have 15 percent rates are the Czech Republic, Georgia, Iraq, Mauritius, Montenegro and Ukraine. Hungary and Romania impose 16 percent, while Estonia and Slovakia, 18 percent and 19 percent, respectively.

Recto was the main author of Republic Act No. 9337 or the Expanded Value Added Tax (EVAT) Law. When he ran for re-election in the 2007 elections, he lost mainly because of a political backlash against his role in pushing that law. This time, Recto is playing a “taxpayers’ friend” role by proposing an income tax cut -- to what rate we have yet to divine.

Belgica proposes a “flat tax of not more than 10 percent of individual or corporate income only.” His proposal makes sense but his chances of becoming a senator next month, like many lesser-known candidates, are nil.
-------------