This afternoon, there will be an oral argument and debates at the Supreme Court in Baguio City. Two petitions by Risa Hontiveros, et al challenge the constitutionality (for the second time) of RA 7942 or the Philippine Mining Act of 1995, particularly Sec. 80 and 81 of the law. 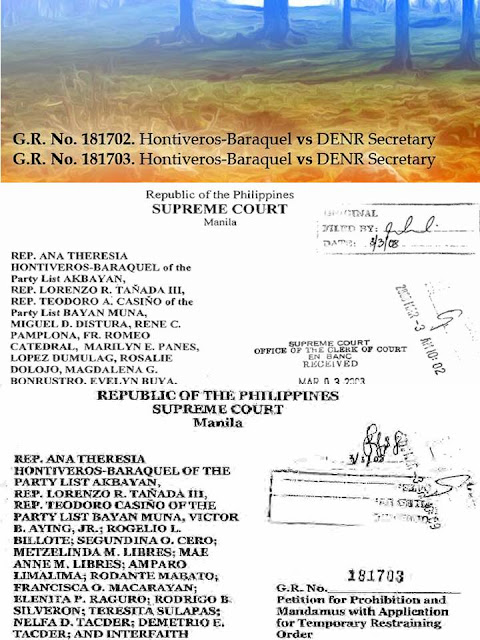 
Petitioners argue that: (1) section 811 of the Mining Act of 1995 is unconstitutional because: (1) it violated the rule on delegated legislation; (2) the Secretary of the DENR (public respondent) acted with grave abuse of discretion resulting to lack or excess of jurisdiction in the issuance of DAO 07-12; and (3) both section 81 of the Mining Act and DAO 07-12 are unconstitutional because they allow inequitable sharing of wealth contrary to Article XII, Section 1, par. 1 and Section 2, par. 1 and 4 of the 1987 Constitution.


Will watch the results of the debate later today and tomorrow.

Meanwhile, below is a short timeline of various policies governing the mining industry in the country. I saw a rappler report on timeline mining. It was highly incomplete though as there are many other DENR Administrative Orders (DAO) and Department Memorandum Circulars (DMCs) affecting the industry. I skipped several DAOs and DMCs in producing this list.

Jun. 19, 1995
La Bugal-B'laan Tribal Association questioned the Constitutionality of RA 7942 and its IRR, particularly the FTAA, which allows foreign ownership, before the Supreme Court.

SC ruling, RA 7942 as unconstitutional, January 2004
The Supreme Court en banc said the Mining Act of 1995 is unconstitutional since it allows foreigners to engage in mining through FTAAs, which is contradictory to the 1987 Philippine Constitution.

SC reverses, declares RA 7942 as constitutional, December 2004
The Supreme Court reversed previous decision on the unconstitutionality of the Mining Act. Associate Justice Artemio Panganiban pens a resoution that says "full control is not anathematic to day-to-day management, provided that the State retains the power to direct overall strategy". This gives the government a go-signal to issue FTAAs.