Indian government's intellectual property rights (IPR) system for medicines seems hazy. For instance, it did not give full patent protection for medicines before, until India joined the WTO in 2005. Even then, many innovator drugs have no IPR protection, like the case of popular anti-leukemia drug molecule imatinib, brand "Glivec" or "Gleevec" made by Novartis.

According to wikipedia, anti-chronic myelogenous leukemia (CML) drug imatinib, "more than 90% of patients will be able to keep the disease in check for at least five years, so that CML becomes a chronic, manageable condition."

So Novartis in effect is sort of a "hero" to many leukemia patients for coming up with this revolutionary drug. But many sectors in India (and elsewhere around the world) did not look at it this way. Rather, Novartis is looked upon as a blood-sucking multinational who profits from the sick and dying leukemia patients. Thus, its effort to seek IPR protection through a patent was not recognized by an Intellectual Property agency or office in India. So it went to the Indian Supreme Court to obtain such patent and after about a decade of legal and health debates, the SC has ruled against the company's request. 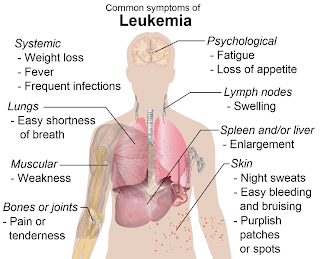 From wikipedia article about leukemia, there are four kinds of this disease. Their respective medication are as follows (image also from wiki):

(1) Acute lymphoblasticinduction chemotherapy.... For adults,... prednisone, vincristine, and an anthracycline ....L-asparaginase or cyclophosphamide. For children... (prednisone, L-asparaginase, and vincristine)Consolidation therapy or intensification therapy ...  antimetabolite drugs such as methotrexate and 6-mercaptopurine (6-MP)

(2) Chronic lymphocyticcombination chemotherapy with chlorambucil or cyclophosphamide, plus a corticosteroidsuch as prednisone or prednisolone....  fludarabine, pentostatin, or cladribine.... Younger patients may consider allogeneic or autologous bone marrow transplantation.

So there are many existing drugs against leukemia, depending on the cell type and on whether it is acute or chronic. So they are all non-patented or off-patent already in India?

Novartis and other innovator companies are brave to introduce their new and more revolutionary medicines to Indian patients without IPR protection. Or if they have have one, they have to live with the fact that a patent-confiscation government tool called compulsory licensing (CL) can be imposed by the Indian government anytime.

One result of this situation is an uneven competition. An innovator company that spent huge amount of money and many years in R&D and multiple clinical trials, must sell at a high price to recoup its high spending. Then generic producers that spent nothing to discover the original drug molecule but can produce their own brands of the same molecule can sell at a much lower price.

How can the former adjust with this reality? Plain old economic sense would dictate market segmentation -- different (or tiered) pricing for different buyers or patients with different budget. And for really poor patients, zero cost to them via public-private partnerships or via civil society partnerships. I am told by a friend that Novartis in India has various drug donation programs, like partnership with the Max Foundation, a cancer patient advocacy organization, and gave the Glivec International Patient Assistance Program (GIPAP) providing more than US$ 1.7 billion worth of Glivec to poor patients in India. In effect, the company was giving not cheap but free medicines to the poor, funded by high pricing to richer patients who can afford it. 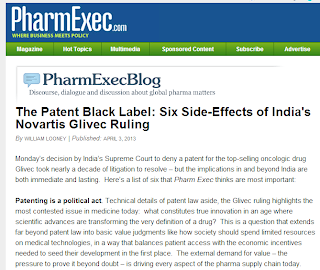 I also read this interesting article, and I like the first of six "side effects" of the Glivec ruling in India: Patenting is a political act. It is not a scientific or economic act. One must go through strictly political process to obtain a patent. Or if one has it, go through the same political process to retain and protect it, until the patent has  expired. The author, William Looney, wrote,


what constitutes true innovation in an age where scientific advances are transforming the very definition of a drug?  This is a question that extends far beyond patent law into basic value judgments like how society should spend limited resources on medical technologies, in a way that balances patient access with the economic incentives needed to seed their development in the first place.

It is not good to politicize innovation. There is too much politics in our lives already. Wages, fares, prices of certain commodities, setting up a business, closing a business, hiring and firing workers and managers, they are covered by politics. To extend politics to products of scientific discovery, when none of the money spent for such activity came from taxes, is OA.

The climate for IPR in India has become more uncertain. Last year, the Indian government issued their first compulsory license, which permits local companies to make generic copies of a patented medicine for a small fee. Since January 2013, three additional compulsory licenses were issued for three different cancer drugs.

As more politics raid products of innovation, more rent seeking behavior is rewarded. This is not the proper role of government, to pick winners and losers based on certain subjective if not arbitrary criteria. The proper role of the government in this case, is to leave players to do their own thing so long as public health is not endangered. So if there are 30 or 50 innovator companies who would race with each other in producing a new medicine against prostate cancer or breast cancer or other killer diseases, so be it. These are on top of existing drugs and treatment against those diseases that are off-patent already. Let those innovator companies price their own products. For sure, competition among them will force them to develop various types of pricing and drug donation programs.

Less politics, less government intervention in the drug innovation business and competition. This is one cool way to ensure that present and future patients suffering from killer diseases can find solace and hope to lengthen their lives.
-------------------