The Anti-Smoke Belching Units (ASBUs) of various city governments in Metro Manila are now among the modern highway robbers and road terrorists.

These photos I took last February 14, 2013, afternoon. I was riding an air-con bus and have a good, elevated view of the other side of Buendia, Makati CBD-bound. 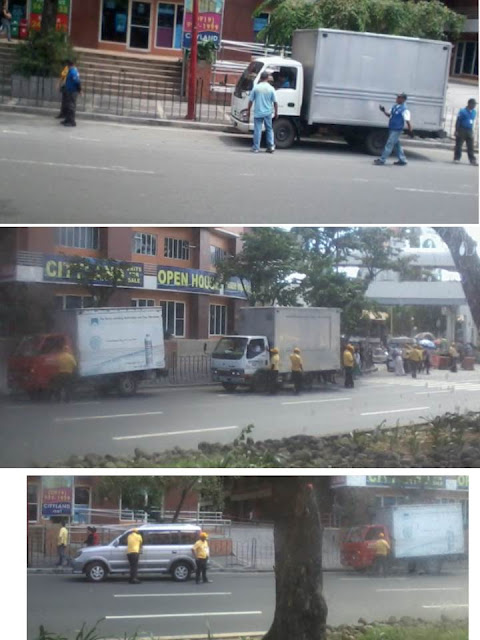 Below are some troubling comments from ordinary motorists. The 5th comment, below, was made only this morning. People normally do not give their full name as they are helpless when confronted by a gang of those local bureaucrats who are "empowered by the law" to flag down and stop ordinary citizens from free travel, on arbitrary and flimsy reasons. These comments also serve as "tips" for motorists driving diesel engine cars, vans and pick ups.
----------


Barely two weeks before Christmas, my Cebu-based older brother was in Metro Manila on official business. To facilitate his travels, he borrowed my car, a 2005 Hyundai Starex, which is in tip-top condition as it is regularly maintained. While driving along Buendia (Gil Puyat Avenue) near Dian, he noticed about five private cars (AUV, pickup, other diesel-powered cars about 5-7 years old) lined up on the right side of the road with about four or five Makati traffic enforcers (in yellow and green uniform) talking to the drivers.

My brother was driving slowly, taking extra caution because buses were passing by the area, when traffic enforcers/officers waved for him to stop. He acceded and parked on the right side of the road totally perplexed as to what could have been his traffic violation. “Sir,  bakit  po? Ano  po  ang  violation  ko?” he asked one of the officers. “Nagpa-smoke emission test ka ba nito?” the officer replied. Knowing that my car is maintained well, my brother replied, “Opo, nung  huling  registration.”
The officer asked for the smoke emission certificate. When my brother showed it to him, the officer said the test had expired. My brother said how could it be, the smoke emission test was just done the previous September as part of the car’s registration process. The officer said that in Makati, smoke emission test is required every two months. My brother said he did not know of such requirement as he is from Cebu. Then the police officer said, “Naku papano ’yan, babaklasin na namin tong plaka.”
My poor brother was so shocked something like this could happen to him. Keeping his cool, my brother explained to the police officer his lack of awareness of the ruling and the seeming absence of announcements on this regard. He begged and pleaded with the officer to let him go. My brother’s angels must have been there watching over him because the officer gave back his driver’s license, though not after saying, “Sige eto na, ikaw na ang bahala.” My brother thanked the police officer and drove away thinking if what the officer meant with “ikaw na ang bahala” is the same as what you and I may be thinking. The thing is, my brother did not give in. He just went away after getting his driver’s license.
After hearing of this, I got so irritated, disappointed and upset, and questions hounded my mind. Is there really such a ruling? If there is, is it legal? Why did the officer stop my car, which was not emitting black smoke? Why were the officers only picking on private cars while leaving “untouched” buses that spew thick black smoke?
Though I do not drive my car to Makati every day, in this land of double and even triple taxation, a smoke emission test every other two months would be an additional big burden for us fixed-income earners who contribute a big chunk of our salaries to the government. I would like to bring these concerns to the attention of Mayor Junjun Binay, MMDA Chair Francis Tolentino and the LTO chief.