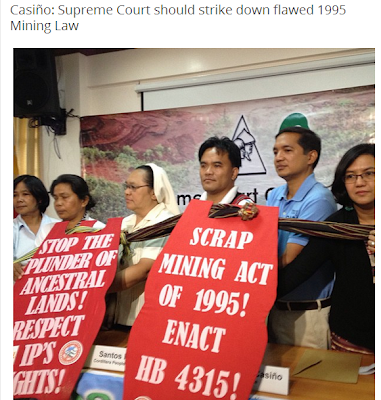 We recently challenged provisions of the Mining Act of 1995 in court.

A supporter of Casino defended him, below are our exchanges:

Leon Dulce Para-Sa Kalikasan But its contribution overall is only 0.91% to GDP, 2.5% in total investments and 0.38% to total employment. At hindi lang taxation ang usapin sa large-scale mining.
http://www.businessmirror.com.ph/index.php/news/nation/10114-mining-act-assailed-by-ngos-anew

Nonoy Oplas The contribution of mining to GDP is similar to raw agriculture. Chicken sold at wholesale price would cost only about P100 each on average, that's the agri share to GDP. When the same chicken is sold as litson manok and sold at P212 (Andok's or Baliwag litson), the P112 value added is counted as service sector share to GDP.

Copper, nickel, iron, when sold as ordinary stones or soil, is priced relatively low. But without these mineral products, there will be no construction and steel industry, no electricity and power industry, no tv/cellphones/radio/various electronics industry.

Leon Dulce Para-Sa Kalikasan Minerals are finite and should be utilized based only on the needs of the people, with the environmental and socio-economic concerns of communities in mind, and with a national industrialization plan in mind.

But as it stands, ores and huge profits are exported while the people are left with literally crumbs. And poison. Look at Padcal Mines in Benguet. Look at Citinickel Mines in Palawan. These are just recent cases. Paano yung long-standing and unresolved like Marcopper?

Mining by TNCs are not bringing in the revenue and safety as advertised. Mining should the public's, no one else.

Please read the article linked above in sir Teddy's caption before rehashing the tired, old lines about "no laptops if no mining."

Nonoy Oplas I read Casino's statement and it's lousy. As I noted above, tax payment by small scale metallic mining in 2010 was zero vs. P12 billion by big metallic mining, constituting 43% of their net revenues. Why is Casino silent on zero taxes, all extraction only by so-called "small scale" mining but are actually "big politicians mining".

Mineral deposits are infinite. Magma, gases and geological movement from the planet's core to the mantle up to the crust, mineralizes ordinary rocks and soil. That is why countries in the Pacific Rim of Fire have more mineral deposits than those in Africa, Europe, S. America and N. America atlantic side. A mining engineer from UP Diliman showed slides about this, http://funwithgovernment.blogspot.com/2013/03/mining-8-supreme-court-hearing-on-ra.html

Leon Dulce Para-Sa Kalikasan Ooh, geologists and mining engineers! Let's wait for the millions of years needed to renew minerals through the continental drift. In the meantime, let's be contented with the poverty incidences that remain highest in mining-affected communities, according to UPSE economists.

Nonoy Oplas I saw Rio Tuba Nickel Mining in southern Palawan. That small barrio has more shops, more cemented roads, wide street lights, a La Salle-administered private elementary and high school and it's free for all of its students, a modern private hospital and it's free for all patients. So the "poverty incidences that remain highest in mining-affected communities" is fiction story by some emotional environmentalists. A few kilometers outside Brgy Rio Tuba, even in the municipal proper of Bataraza, there is more poverty, more unemployment, zero hospital available. See the photos and you will fume more
http://funwithgovernment.blogspot.com/2013/03/mining-8-rio-tuba-mining-in-south.html


Casino said, " Under the MPSA and FTAA schemes only guarantee the country miniscule revenue in allowing foreign corporations to extract our finite mineral resources that does not augur well for our national economy."

P12 billion collections by the government, local and national, from big metallic mining in 2010 alone, is "miniscule revenue"? So what does Casino call the zero tax payment by "big politicians mining aka small scale mining", maybe he'd call it "giant air revenues"? In 2010, small-scale gold mining produced an estimated P43 billion gross production and paid zero tax. Even the BSP buys about 60 percent of its gold requirements from these so-called "small scale mining".

Is Casino now among the spokesperson of "big politicians aka small scale mining" for being silent in their zero tax payment big business? But I thought Casino wants more tax-tax-tax to finance his nationalist-socialist agenda.
--------

Meanwhile, from the Business Mirror article posted by Leon above, Mining Act assailed by NGOs anew, I am lifting these paragraphs and numbered them as I have a comment in each of them.

(1)    The Kalikasan-People’s Network for the Environment (Kalikasan-PNE) said the law has only cleared the path for foreign exploitation of the country’s natural wealth and did not contribute much to national or local economic development of host communities as promised by both the government and its contractors.

(3)    “Only a nationalist mining industry can truly benefit the Filipino people,” Bautista added.

My comments are as follows:

On (1), “foreign exploitation of the country’s natural wealth”, I thought that majority of the big mining firms here are locally-owned with a minority foreign equity ownership. Philex Mining for instance is owned by the Manny Pangilinan group. Sagitarrius Mines Inc (SMI/Tampakan) is mainly foreign, allowed under the FTAA scheme.

“…did not contribute much to national or local economic development of host communities” is wrong. I mentioned the case of Rio Tuba in Palawan above.

On (2), “mining only ‘profits big companies.’” See again this table that I showed earlier in “Mining 7: Mining Taxation and Government” 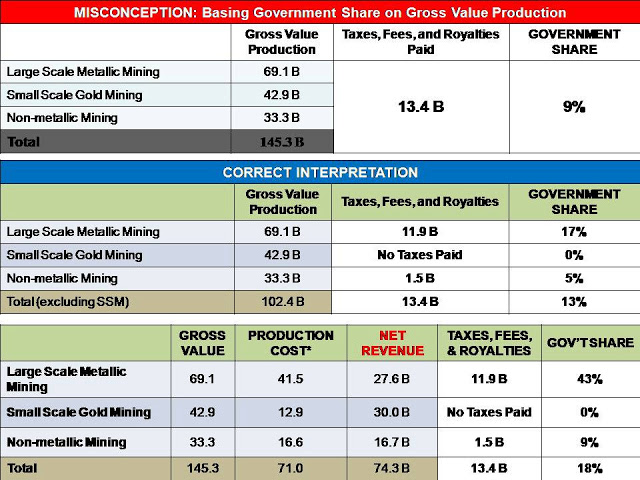 On (3), “nationalist mining” is already happening. Go to Diwalwal, there is not a single foreign corporation involved there, only Filipino nationals. How has it “truly benefit the Filipino people”?

On (4),  here is Philippine GDP by industrial origin at constant prices, percent distribution

It is true that the share of raw mining production (big metallic mining + small gold mining + non-metallic mining) is small relative to GDP. But without those raw mining production, say ALL mining activities in the Philippines and the world will be stopped, then there would be no other industrial production (construction, electricity, metal manufacturing, auto and tricycle production, etc.). And services sector will also be very small – no retails and wholesale as there will be no malls, no ships, trucks and cars produced, and so on.

Back to the example of chicken farming again. The value of live chicken production (under the Agriculture sector) is small relative to GDP but without these, there would be no litson manok, carinderia and restaurant business that sell chicken curry/chicken tinola/chicken adobo, etc. Raw production of mineral, agricultural and fishery products create huge opportunities in the downstream sectors and industries. So one can not belittle or pooh-pooh the “small production share” of mining, agri, and fishery.