The "non-renewable" nature of mineral products, oil and gas is among the central arguments by many groups that oppose commercial or large-scale mining, both metallic and non-metallic.  I want to delve on this issue briefly.

In a presentation last April 12, 2013 at Balay Kalinaw, UP Diliman, a researcher of the Legal Research Center (LRC) and a new friend, Japs Hatta, made the following statements in her paper, The Value of Revenue Transparency in Extractives/Mining Industry.

Two illustrations below, I got from the web. Top image shows the layers of our planet Earth from the core up to the crust. Note the Aesthenosphere on the upper mantle, just below the Lithosphere.

Lower image shows mineral deposits at ocean bed and ridges, the Aesthenosphere and  Lithosphere.layers. Rising magma brings up various mineral products to the mantle and later, the crust. 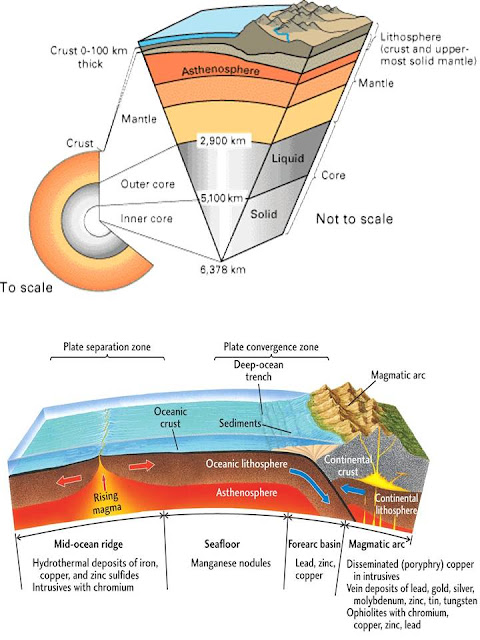 The production of natural resources is independent of other economic processes, true. But other economic processes cannot proceed and will not be possible if there are no mineral products as raw materials. There will be no production of cars, trucks, buses, tricycles, airplanes if there are no steel, iron, copper and other materials from mining. There will be no buildings, shops and malls, airports and seaports, if there are no steel and cement. And there will be no electricity, only darkness and candles, for many places without coal-fired power plants. And even if power generation comes from hydro or geothermal, there will be no  transmission cables and electrical wires to bring that power to our homes, offices, shops and schools.

Another set of illustrations below, also from the web, showing areas of certain mineral deposits. They are mostly found near or around volcano areas. Volcanoes are the main outlets of magma and gases rising to the surface and the crust. And that largely explains why countries in the Pacific Rim of Fire where most of the planet's volcanoes are found, have more mineral deposits. The Philippines for instance has about two dozens of volcanoes, less than half are considered active. 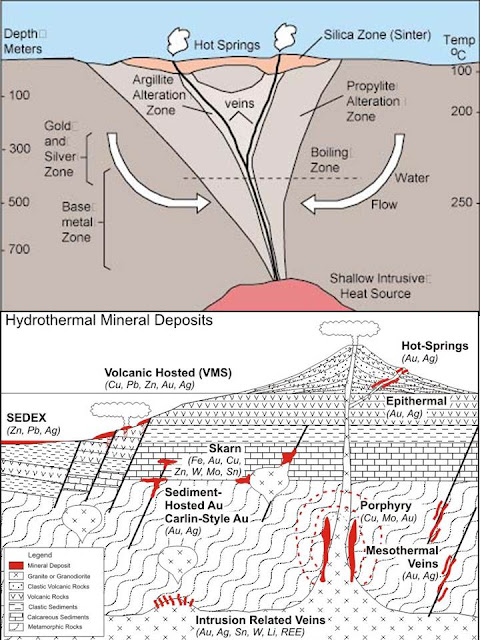 Secondly, many natural resources such as minerals, oil and gas, are considered non renewable.  The sciences have not discovered a way yet to reproduce these natural resources.  Thus, once a mineral ore deposit is fully depleted or mined out, a new mineral deposit does not grow back.

As mentioned above, over geological period, mineral products are technically renewable. Upward movement of magma and gases from the core brings up those mineral products or mineralizes "ordinary" rocks and soil. So remnant rocks and soil that previously appeared non-mineralized or have small amount of mineral ores after being mined out, can have high mineral deposits once again, but after thousands of years.

My geologist friend John gave these pointers to me:

For all practical purposes, mineral products are non-renewable. The vast majority of mineral deposits-- gold, copper, petroleum, REEs, chromite, etc.-- are formed and concentrated over geologic timescales, so essentially non-renewable. If you can wait for 10,000 to 1,000,000 years, then new deposits may be formed.

There are two main reasons why a deposit maybe "done." A deposit may actually be completely mined out after all the ore has been removed and all that is left is "normal" or average crust. Or, there may still be ore that continues at depth, but it is not economical to continue to mine deeper because of the increasing cost to extract the ore. If better mining technology comes about, then, yes, we may be able to continue mining the latter deposit. But in the former case, no new mining technology will help mine the ore if there is in fact no more ore to mine. It is conceivable, but perhaps unlikely, that a completely new method of extracting ore, like gold, may be invented so that we are able to extract gold from "ordinary" rock. But as I say, it is highly unlikely that such a revolutionary technology would be possible for all types of resources that we need.

The first sentence is true. Extraction and utilization of minerals and their industrial and consumer products affect both the present and future generations. And most of such effect are positive, not negative, as evidenced by continued modernization of human societies and economies. It should be pointed out that extraction is not as rampant and large-scale as assumed or imagined. In a presentation at De La Salle University (DLSU) last January this year, Prof. Darrel Ablaza of the UP Department of Mining and Metallurgical Engineering said that

Here is one of his slides showing the various processes before an actual mining extraction -- the thing that many people dislike, the extraction -- can begin. So only if stages 1 to 7 have produced positive results, can stage 8, actual mine production, can start. A negative result in any of those stages 1 to 7, meaning non-economical to pursue, would imply No mining. 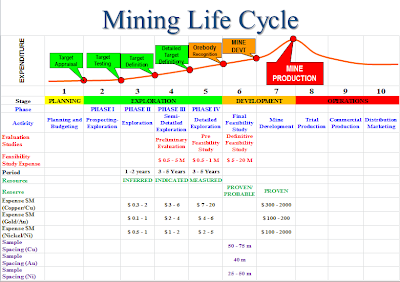 Another note from Japs,

The nature and opportunities of the natural resources wealth is a breeding ground for rent seeking behavior... monitoring mining revenue is not simply an issue of fiscal flows.  What is being extracted will never come back....

mineral extraction … deprives future generations from enjoying such resource and affects the renewable character of other natural resources.


Rent seeking behavior happens in almost all aspects of activities so long as government is involved, whether extractive or not. Gambling, prostitution and drugs are non-extractive human activities and yet rent-seeking, corruption, bribery are all happening.

Yes, the extracted mineral rocks and soil will not come back as rocks and soil. Rather, they come back as steel and iron, copper and nickel, gold and silver, lead and zinc, etc.-- in the form of cars and buses, malls and buildings, spoon, fork and knives, laptops and cell phones. nails and hammer, coins and jewelries, and so on.

Again, mineral extraction is not as widespread and large scale as assumed and imagined. And thus, future generations are not deprived of such resources. As the science of mineral exploration and extraction evolves and modernizes, what appears to be "non-economical" today would be "economical" tomorrow.

Unlike "small-scale" mining where safety measures like building tailings pond, and rehabilitation measures like reforesting mined out areas, are not done, large scale mining are generally more economical. The latter creates more jobs, pays more taxes, fees and royalties, does more CSR projects for the communities.