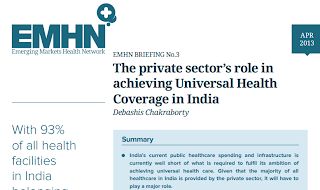 Another bright and sensible paper from one of our international partners, the Emerging Markets Health Network (EMHN). In a new paper published this week, Indian economist and a friend, Debashis Chakraborty of the Indian Institute of Foreign Trade in Delhi, argued that "PPPs have the potential to help India achieve its healthcare ambitions, although the government should refrain from using its power to dominate the partnership, and will have to allow private partners greater scope both to plan and manage." 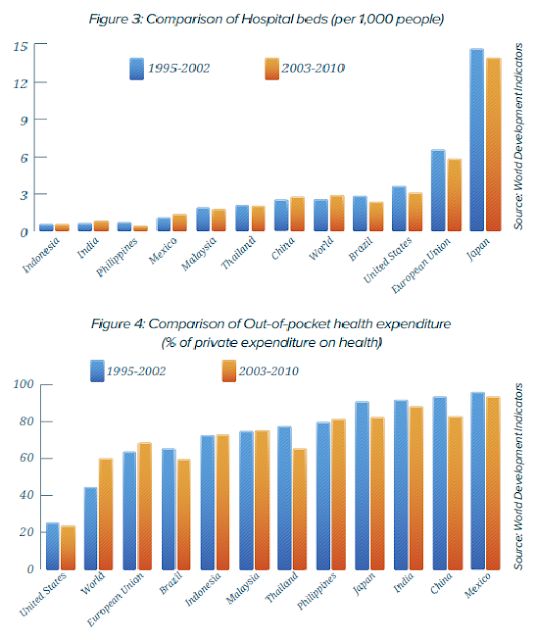 Why is this so, especially in the case of India? Debashis made a good observation:


The poor performance of several PPP initiatives begs the larger question of whether the government considers PPPs as a ‘private initiative supported by the public sector’ or a ‘public initiative supplemented by the private sector’. This distinction is crucial, because if the former is the underlying motive, then the government role will be reduced in the long term to a mere facilitator, and efficiency will automatically be augmented with increasing operational flexibility of private partners.

However, if the government views itself as the dominant partner in PPPs, they will always prioritise their own political requirements and agendas over the efficient running of the PPP. This could fatally undermine the viability of many PPPs.

And that is one more reason why government role in healthcare should be limited and more focused, so it can optimize its delivery. I believe that government should focus on controlling (a) infectious and communicable diseases, and (b) pediatric diseases like childhood cancer, more childcare especially for those below six years old.

Nice work again and congratulations, Debashis. EMHN is doing well with your bright contribution to the network.
------------------