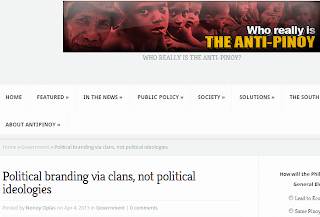 “I googled "Nancy Binay", nothing significant, nada. So this is true.” 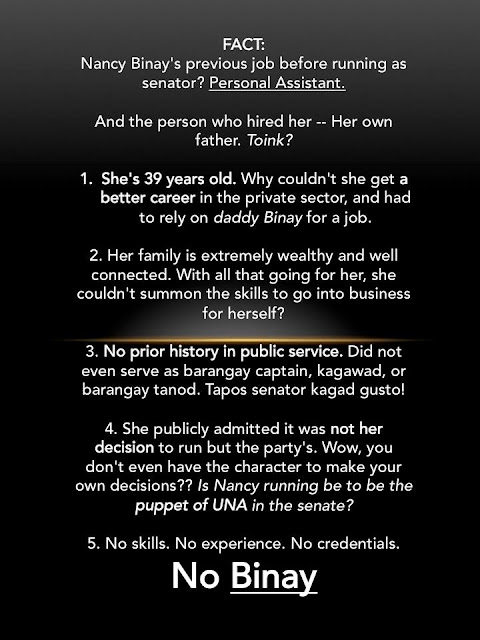 39 years old, no prior elective post, held only family-managed NGOs. Never joined a prestigious corporation. Simply being a "Binay". She's likely to win, and she will author Senate bills that will regulate private enterprises, private individuals, civil society.

A friend told me that she went to UPSE in the 90s, but did not finish there, transferred to another college. Her car's plate number while in UP was simply BINAY, not the LTO-issued letters + numbers.

If Nancy Binay lands in the top 6 this coming May elections -- almost a never-heard political identity until this campaign period -- then VP Jojo Binay will most likely be our next President in 2016. The family's media handlers made a good political brand for the family: "Kay Binay, gaganda ang buhay". And Makati's high taxes, high bureaucracies regime to finance a welfarist nirvana will be imposed on the rest of the country.

A friend commented that the propagation of dynasties like Binays is a result of “having too much liberty." He is wrong. This is a case instead of too much government.

Government can tell businessmen how much they can keep out of their gross revenues, government can tell us when we can NOT drive our own car. In some sectors, government can tell companies how much they should price their products, how much discounts they should give to sectors senior citizens and persons with disabilities (PWDs). That is why the most scheming, the most opportunistic people in the population are attracted to politics, especially to high positions like Congress and the Senate. They need not own businesses but they can regulate and tell businesses how they should behave, via regulations and legislation.

Theoretically, political branding should be via political parties with distinct political ideologies  -- socialist, fascist, nationalist, liberal, conservative, etc. This distinction is absent in our political parties and coalitions. All political parties here are welfarist-populist, voters hear generally the same promises from politicians of endless subsidies. So to distinguish themselves from others, the politicians shifted to  personality- or leadership-oriented campaign. And that is where known political names and personalities rise: Aquinos, Binays, Enriles, Estradas, Arroyos, Revillas, Villars, and so on.

“Is there no end really to this political dynasty in our country?” Another friend asked.

I think the answer is Yes. There is No end to political dynasty until political parties go back to ideology-based campaigns. Politicians do not go through a strict political convention where they are scrutinized by party members who are fully cognizant of their political philosophy and ideology. Liberals can never and should never be in the same party as socialists and conservatives and vice versa. But here, they share the same bed because they do not live with those specific political philosophy anyway.  It is mainly a question of "winnability", money and political network.

“With the kind of government we have, no matter how we bark..in many aspects in our lives as Filipinos..we are helpless...i mean the majority ...considering how dirty politicians play their tricks…” Still another comment.

Right so. All the campaigns for "BIG but good governance" will result only in more disappointments. The anti-corruption campaign and sentiment since People Power Revolution or Edsa1 in 1986 has produced no significant reduction in corruption, but government has expanded larger and larger, from local to national levels. The campaign should be for less government, not “good governance.” How? At least by NOT supporting many new legislation, new subsidy programs unless government will also shrink or abolish some existing subsidy programs.

“We, the people are the victims...forever?” Another friend asked.

To a large extent, the answer is YES. Government is coercion. It is not a tennis club or rotary club or church fellowship or other voluntary orgs that when you get tired, you just resign from membership and stop paying your annual dues. In government, even if you have corrupt legislators, lazy policemen, rude local governments, etc., choice is zero. We just have to continue paying for them.

Nonetheless, I am not attracted to the philosophy of anarchy (zero authority, zero government). There is some use to certain government coercion. Like going after armed murderers, thieves and hold-uppers, land grabbers and bank robbers, other criminals. Or resolving disputes among neighbors, among corporations, among clans, if existing non-government dispute settlement mechanisms do not work. Before they start stabbing or shooting each other, government steps in to enforce the rule of law. Promulgating the rule of law is the single most important function of government. All other functions are either secondary or unnecessary.
-------------

Hi, thanks for sharing your nice blog. If anybody needs a Election consultant, agency, political career path, you can contact at any time.
Political campaign management companies in india
political marketing in India
How To Become a Politician In India