The police -- like the Philippine National Police (PNP) -- is supposed to be the main implementer of many laws protecting the citizens' right to private property, right to life, right to liberty. Thus, the police should be in the frontline in going after law violators -- thieves, murderers, kidnappers, sex traffickers, etc. Whether big or petty crimes, the police should be upholding the laws, not violating the laws.

Below are some instances where the police are violators of several traffic or road regulations. Like no counter-flow, no obstruction of traffic, "no helmet no travel". 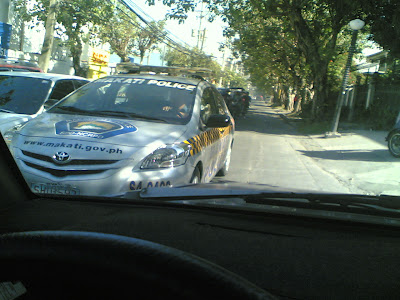 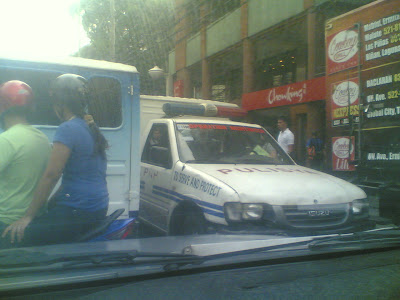 These traffic policemen violating the "no traffic obstruction" by obstructing an entire a north-bound traffic of Edsa, to allow some political VIPs to pass, coming from that funeral park in Guadalope, Makati. I took this inside a bus, sometime last year. 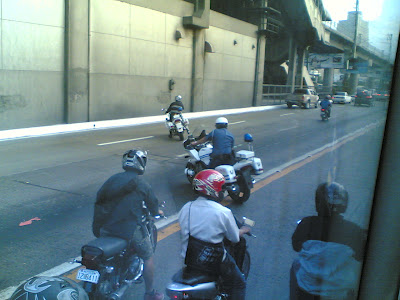 This photo I got from facebook, no date and place. The caption simply said, "Where are your helmets, officers?" Policemen violating the no helmet, no travel policy. 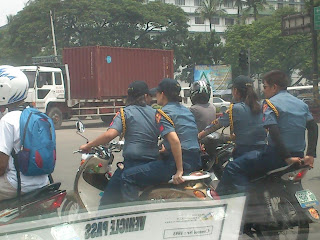 Today, this photo was posted also in facebook. No date and place, just being passed on by different facebook users. 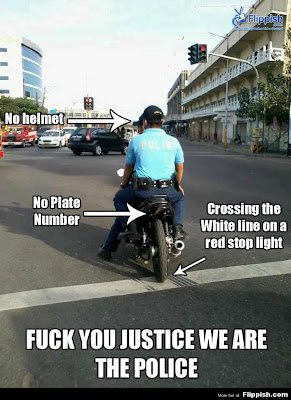 Ok PNP, don't get me wrong. I recognize your role in keeping the peace in this country somehow. I am not demonizing you entirely, I recognize some of the good things that you and our policemen do. But please, please, refrain from these "we are above the law, we are the police" practices. Do not counter-flow, stop on red lights, do not park in no parking areas, do not make a left turn or U-turn in designated No left turn/U-turn areas. Learn to obey rules, big and small ones.

Many private motorists who act like you often name drop Police Major or Police General so and so when apprehended by other traffic enforcers. You start it, others follow. Ordinary motorists like us can only shake our head -- as we fork out hundreds of billions of taxes for you and many other government bureaucracies.
----------

Email ThisBlogThis!Share to TwitterShare to FacebookShare to Pinterest
Labels: PNP, rule of law, rule of men