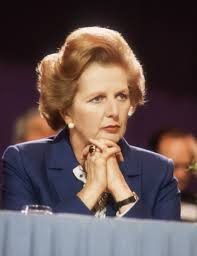 Let me start with a few quotes from this great leader.

To cure the British disease with socialism was like trying to cure leukaemia with leeches.

If my critics saw me walking over the Thames they would say it was because I couldn’t swim.
http://www.thesun.co.uk/sol/homepage/news/4878472/Margaret-Thatcher-in-quotes-Iron-Ladys-most-famous-phrases.html

I came to office with one deliberate intent: to change Britain from a dependent to a self-reliant society -- from a give-it-to-me, to a do-it-yourself nation. A get-up-and-go, instead of a sit-back-and-wait-for-it Britain.  (February 1984)

We have not successfully rolled back the frontiers of the state in Britain, only to see them re-imposed at a European level with a European super-state exercising a new dominance from Brussels.  (September 1988)

Ronnie and I got to know each other at a time when we were both in Opposition, and when a good many people intended to keep us there. They failed, and the conservative 1980s were the result. But in a certain sense, we remained an opposition, we were never the establishment. As Ron once put it: the nine most dangerous words in the English language are 'I'm from the government, and I'm here to help.' As usual, he was right.  (MT on Ronald Reagan, 2002)

Thatcherism claims to promote low inflation, the small state and free markets through tight control of the money supply, privatisation and constraints on the labour movement. It is often compared with Reaganomics in the United States... Thatcher'sChancellor of the Exchequer from 1983 to 1989, listed the Thatcherite ideals as:

Yesterday, a friend in UK posted in her facebook wall that she understands the anger of some British citizens against Thatcher because she lived for several years in north Britain and she saw the economic destruction of communities and industries there under the Thatcher leadership. That until now, people there despise there, some even have parties celebrating her death. And that her husband was a young man in the 80s and can never forget the hardships they experienced during that time.

I replied that Thatcher cut welfarism and the strong labor unions’ political power, the succeeding UK governments reinstated and expanded welfarism. AfterWW2 up to the 70s, UK was almost socialist. Education, hospitalization, housing, transpo, pension, etc., all taken cared of by the state. And the state took almost everything from the people's pockets. Thatcher changed that. The Brits loved her, that's why she was elected and re-elected and re-elected, PM from 1979-90 (11 years).

The current PM David Cameroon made a brief assessment, “welfare system has lost its way”, http://www.interaksyon.com/article/58859/british-pm-says-welfare-system-has-lost-its-way.

My friend suggested that I should explain those things to the British people who suffered under her rule.

I replied that t's the British people's own PM who explained that to them. I'm no British to do that task. They elected, directly or indirectly, Cameroon and the latter has some bad news for them, that forever dependency on the state is wrong and the pain will be on them, as they are experiencing now.


Part of the interaksyon report that I posted above said,

The Conservative leader suggested that a system originally designed to protect the frail and be a "stopgap" was now backfiring.

"It was invented to help people escape poverty, but has trapped too many people in it. It was meant to be a stopgap in hard times, but has become a lifestyle choice for some. It was designed to bring us together, but is causing resentment," he said.

"No one wants to work hard every day and see their hard-earned taxes being used to fund things they themselves cannot afford or keep generations dependent on welfare.

This is a powerful statement. But statists and welfarists argue that to tell people to assume more personal responsibility in their own lives is now wrong, that the nanny state should assume "more government responsibility" even if government resources are clearly insufficient and unsustainable to do so. Not good.

I don't live in UK, I don't pay taxes there. People who live in UK or British citizens abroad who glorify heavy welfarism and state nannyism can tell Cameroon or other political leaders there who now plan to cut welfarism and populism to stop that proposal. I write for those living in the Philippines and fellow Filipinos living abroad who bother to read this blog. From the lessons of welfarism and populism in  UK, France, Germany, the PIGS (Portugal, Italy, Greece, Spain), I can say that state nannyism is wrong and we Filipinos and other Asians should follow their model. If it is so right, those European governments should not be heavily in debt by now as their people are productive enough to pay all past debts mainly to expand and sustain heavy welfare spending.

The main saving grace of those European and North American governments why their economies have not imploded yet, is their rule of law culture. Entrepreneurs and investors, even if weakened by high and multiple taxes, regulations and prohibitions, they are strengthened however by the stability of policies, the respect of private property rights, the certainty of punishment for certain criminals and corrupt government officials.
--------------