Mining 11: Big Projects in the US, UK, Canada and Australia

Among the arguments hurled against large scale mining in the Philippines is that the rich countries are heavily regulating if not closing some of the big mining projects there to protect their environment, so we should not allow -- or at least heavily regulate -- big mining to continue in our country and protect our own environment too. The message here, both explicit and implicit, is that "mining = environmental destruction". So the policy implication is that "less or no mining = less or no environmental damage." This is wrong.

As repeatedly argued in my previous articles here, no mining, no modern life. And no modern life means even more environmental destruction. Proof?

High rise residential and commercial condo buildings with lots of residential and office units, with swimming pools and badminton courts, some even have basketball courts, save lots of land. Instead of clearing more land for housing, commercial space, roads and sports facilities, just one building with three or four towers on a half-hectare piece of land can accommodate them all. Thus, more land for agriculture, forestry and meadows can be preserved.

And those buildings, towers, shops and malls, with their electricity and internet connection, appliances and electronic gadgets, are all products of mining. That is why the anti-mining hysteria is full of contradiction if not hypocrisy.

Anyway, these slides below are about some of the biggest mining projects in the rich countries of the US, UK, Canada and Australia. Which debunk the claim of certain sectors that big mining projects are being stopped in rich countries to protect their environment. These slides are from a presentation by Atty. Ronald Recidoro of the Chamber of Mines of the Philippines (CMP) during a forum at De La Salle University (DLSU) Manila last January.

Below, the Bingham Canyon in Utah, USA, is the biggest mining excavation in the planet, operating since 1903 until now, and measuring 2 ¾ miles across at the top and ¾ of a mile deep. So huge. 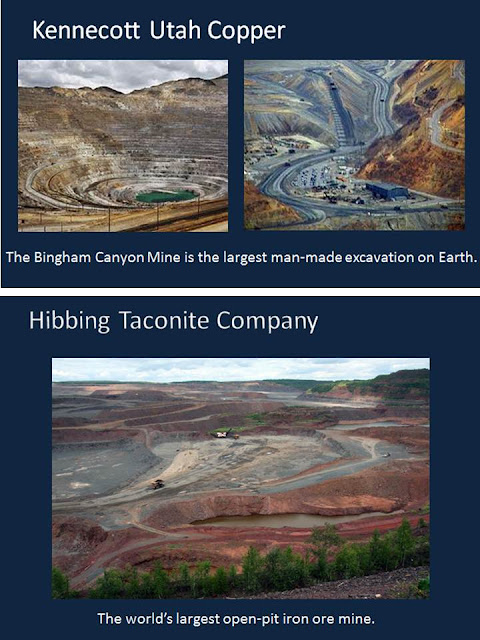 Below is the largest coal producer in UK, found in Nottinghamshire, UK and has been operating since 1974.

Next is "The Super Pit" in Kalgoorlie, Western Australia. Been operating since 1893, measures about 3.5 kms long, 1.5 kms. wide, and 0.36 km. deep. As shown in the photo, thousands of people depend on it for direct and indirect jobs created. 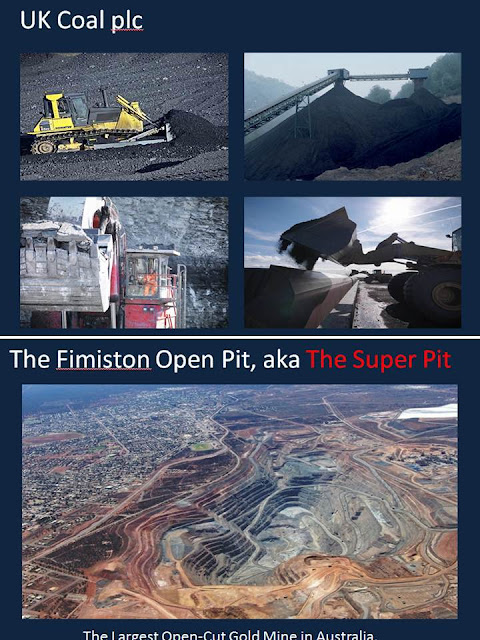 Below, the Argyle in Kimberley, Western Australia. Operating since 1985.

Next is The Diavik in Northwest Territories, Canada, produces 8 million carats of diamonds yearly, wow. 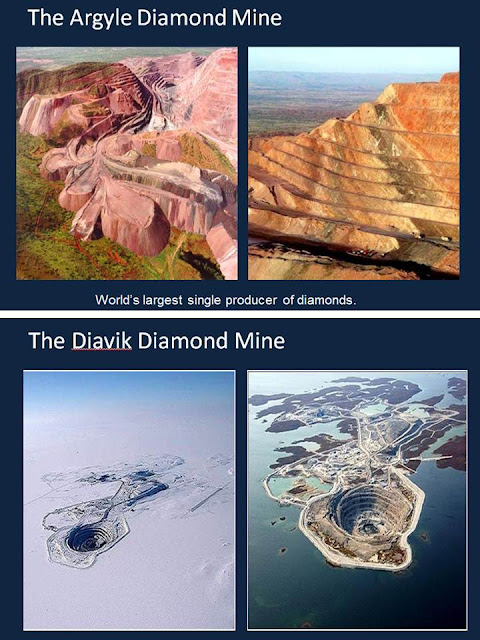 The Ekati in Yellowknife, Northwest Territories, Canada, not far from the Arctic Circle. Operating since 1998, has produced 45 million carats of diamond from 1998-2009. That's lots of wealth for Canada.

Further below, another example of responsible mining, rehabilitating and reforesting a mined out area. Almost zero trace that it used to be a denuded area totally clear of any piece of vegetation. 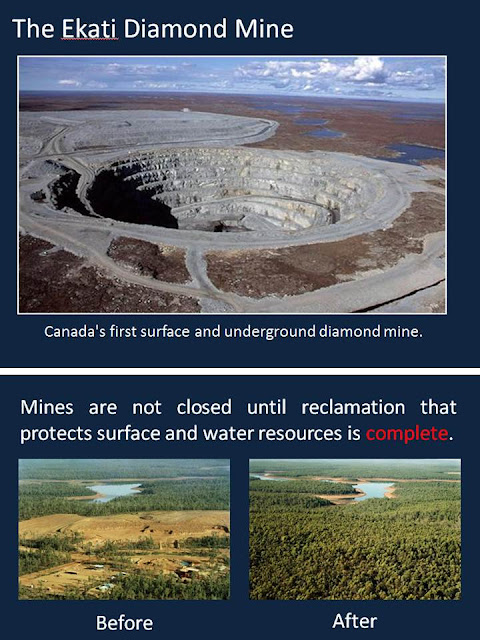 One can say that those rich countries are rich because of their utilization of their mineral deposits, because they allowed big, accountable mining firms to dig deep and produce important mineral products, from coal to iron to gold to diamond. If an economy is rich, it can provide more jobs, more products and services for its citizens and other people around the world.

The role of government in this case is to promulgate the rule of law. There are laws and regulations that allow firms and businesses to extract mineral deposits from the ground without causing major environmental damage and health risks to the nearby communities and residents. Make sure that the mining companies stick to those laws, penalize them if they violate, reward them with non-intervention and respect of private property rights if they comply with those laws.
----------

Email ThisBlogThis!Share to TwitterShare to FacebookShare to Pinterest
Labels: Chamber of Mines of the Philippines, responsible mining, Ronald Recidoro, rule of law